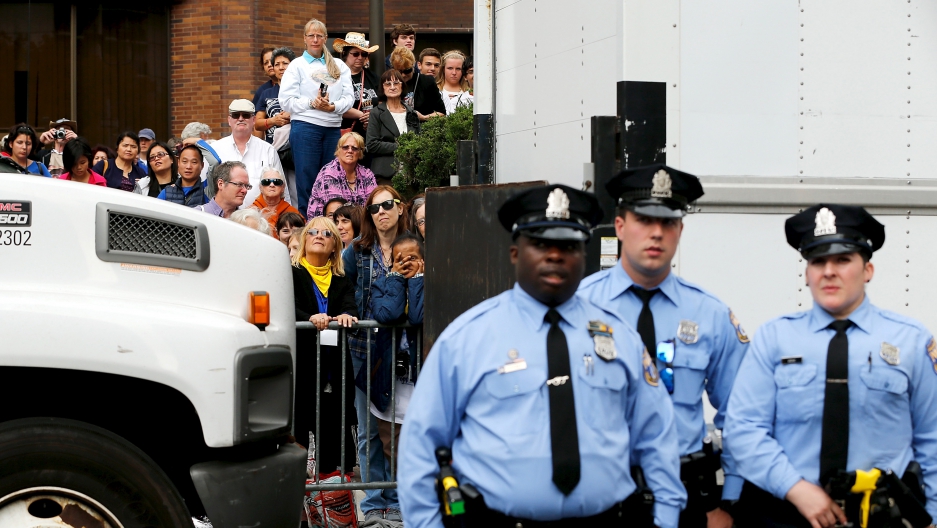 Police manage the crowd in Philadelphia when Pope Francis visited in September, 2015. Mayor Jim Kenney said after the election of Donald Trump the next year that his city will not detain people on behalf of federal immigration agents. "We respect and live up to the Fourth Amendment, which means you can't be held against your will without a warrant from the court signed by a judge,” he said.

For immigrants with a criminal record, sanctuary cities don’t provide protection from deportation. They can, though, delay the process.

In Philadelphia, a year-long probe ended last month when Immigration and Customs Enforcement caught a man with convictions for manufacturing and selling illicit drugs, resisting arrest and theft. Winston Enrique Perez Pilarte, 40, is a Dominican Republic native and a green card-holding, permanent legal resident of the US. His convictions, though, make him eligible for deportation.

He was arrested last year as a suspect in a slew of crimes including attempted rape, unlawful sexual contact with a minor and aggravated indecent assault. In most cities, this arrest would have led him straight to deportation proceedings. But because Philadelphia is a so-called sanctuary city he was released from jail back to the community while his trial was pending, just as a US citizen would have been. He evaded ICE for a year before agents picked him up.

Over the past few months, mayors across the country have doubled-down on their promises to retain sanctuary city policies despite President-elect Donald Trump’s promises to withhold federal funding to their cities for doing so. More jurisdictions are joining the about 300 cities, counties and states with sanctuary-like policies. Among the latest: Santa Ana, California, where the city council decided earlier this month to give the city sanctuary designation.

Broadly, sanctuary city policies limit cooperation between local law enforcement agencies and ICE. What this means on the ground, though, has been obscured by political rhetoric. As The New York Times editorial board noted this week: “The word ‘sanctuary’ as Mr. Trump deploys it — a place where immigrant criminals run amok, shielded from the long arm of federal law — is grossly misleading, because cities with ‘sanctuary’ policies cannot obstruct federal enforcement and do not try to.”

“Sanctuary cities absolutely do not mean that the city is able to protect people from deportation,” says Caitlin Barry, a professor of law at Villanova University in Philadelphia. “The policy says that city employees are not going to use their time and resources to facilitate a deportation or to facilitate the detention of someone who the city's criminal system has already decided to release.”

Even in sanctuary cities, fingerprint data from arrestees is shared with the FBI, which passes the information to the Department of Homeland Security and ICE. So even if a person is not convicted of the crime for which they are arrested, undocumented immigrants with previous convictions are at risk of ICE deportation

More: 'Detained because my name was Gonzalez'

Detainers and requests for notification of release are at the heart of the sanctuary city debate. Advocates argue that by creating a jail-to-deportation pipeline, local police officers are turned into de-facto immigration patrols, which errodes trust between immigrants and the cities where they live.

“What we found is that it [sanctuary policies] improves safety,” says Peter Pedemonti, director of New Sanctuary Movement of Philadelphia, an immigrant rights organization. “Our immigrant community is able to build trust with the city and the police as well. They feel comfortable to call when they need something.”

This was the case for Estela Hernandez, 35, when her husband was robbed last year. The couple are undocumented immigrants, originally from Oaxaca, Mexico, who have been in Philadelphia for 12 years. Last winter, Hernandez’s husband was walking home from a night shift at the supermarket where they both work when he was mugged. The thieves took his wallet and his ring. Because Philadelphia is a sanctuary city, Hernandez says, she felt comfortable calling the police to report the attack.

“Previously I wouldn’t have called the police if there were an incident,” she says, remembering being scared of the local police before former Mayor Michael Nutter enacted sanctuary policies in 2014.

In this case, the police went above and beyond what she expected, she says. Not only did they treat the couple with respect, but they also directed her husband to an immigration lawyer who could help them file for a U Visa, which is a visa for the victims of crime. They are still in the process of applying.

Another common argument in support of sanctuary cities is that it wastes local law enforcement’s time and resources on a task that is out of their purview.

“The policy says that city employees are not going to use their time and resources to facilitate a deportation or to facilitate the detention of someone who the city's criminal system has already decided to release,” Barry says.

Philadelphia Mayor Jim Kenney affirmed the city’s status after Trump’s election in November, but said they would instead call themselves a “Fourth Amendment city.” (The fourth amendment of the Constitution requires the government to have probable cause to conduct searches, seizures or arrests.)

"We have no authority to violate the Fourth Amendment. All the immigration officials have to do is get a warrant signed by a federal magistrate and we'll be happy to turn that person over," Kenney said.

But ICE officials in Philadelphia say they are just asking for information. 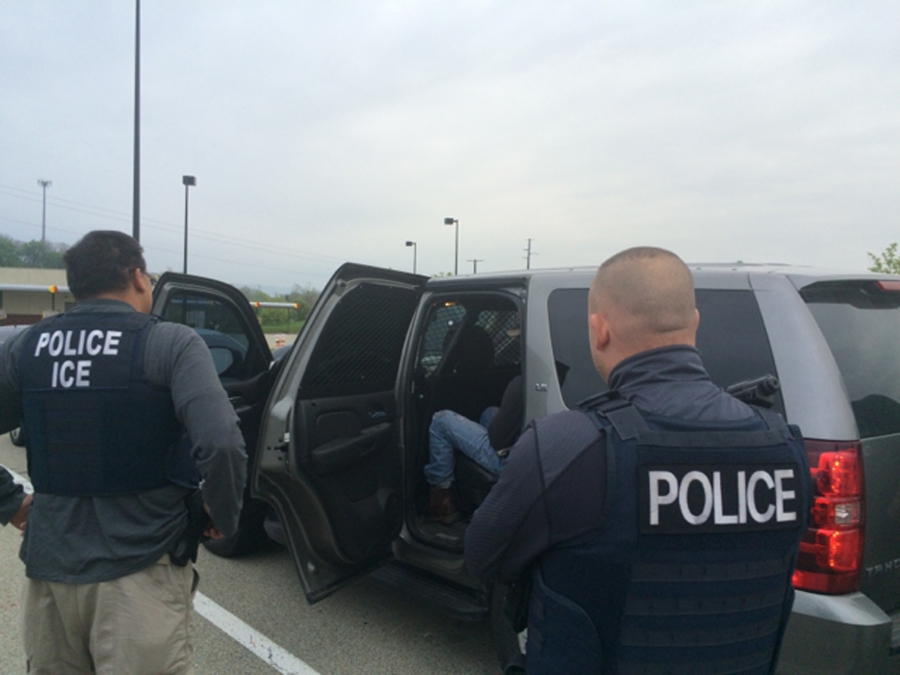 Officers from US Immigration and Customs Enforcement during an operation targeting immigration violators in Philadelphia in May, 2016.

Decker says by not acknowledging its detainer requests, local agents are merely slowing down the inevitable. When a person has had a detainer request placed on them in jail, they are given a copy of it upon release. And so, “They go, they run,” he says.

In the Pilarte case, ICE agents were not able to locate him in the community. They found him when he showed up for a court date last month — where ICE officials were waiting in the courtroom to take him into custody.

For documented, non-citizens, the Trump administration could increase deportations. Undocumented immigrants can be deported by ICE at any time, but those who are here legally, such as Pilarte, must be convicted of a very broadly defined “aggravated felony,” which includes crimes such as filing a false tax return and failure to appear in court.

Kris Kobach, Kansas's secretary of state, was photographed coming out of a meeting with Trump earlier this month holding documents that listed policy recommendations including targeting "any alien arrested for any crime" for deportation. “Alien” is anyone who is not a citizen.

Should Trump heed this advice, sanctuary cities would need to reform the policing practices if they wanted to limit how much their work on crime intersects with immigration enforcement. They could, for example, limit so-called "broken windows policing" in New York City and stop-and-frisk in Philadelphia, which ensnare people in the criminal justice system for low-level offenses.

Max Rivlin-Nadler wrote in the Village Voice this month, “[F]or many residents, the promise sanctuary never arrived, until broken windows is ended or reformed, it remains a long way off.”