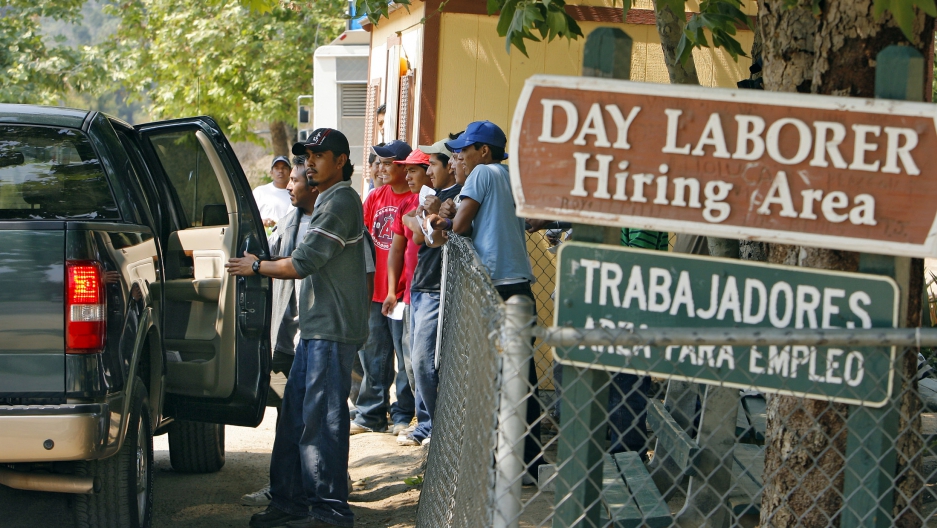 Day laborers enter a truck after being chosen by an employer at a hiring area in Laguna Beach, California

President-elect Donald Trump has clarified his threat to deport undocumented immigrants: Early in the campaign he had threatened to remove all of an estimated 11 million people living in the United States without papers. But on Sunday night he told CBS' “60 Minutes” that only those with criminal records will be removed.

Undocumented immigrants who commit serious crimes are already incarcerated or prioritized for deportation. According to government data, during the Obama administration from fiscal years 2009 through 2014, about 400,000 people have been deported each year. A 2014 directive to Immigration and Customs Enforcement prioritized apprehending undocumented immigrants who are national security threats and those who have been convicted of crimes (PDF). So it’s not clear what will change.

More: Trump says there are 2 million 'criminal aliens' in the US. It's not clear where he got that number.

“The wave of fear that the president-elect’s announcement has created can be felt throughout [the community]... It’s not just the undocumented,” says Pablo Alvarado, head of the National Day Laborer Organizing Network based in Los Angeles. The majority of his members do are undocumented.

Even in the best of times, “the life of a day laborer is an ocean of uncertainty,” says Alvarado. “Absolutely there is more fear now. The threat is much bigger.”

According to Daniel Kanstroom, a law professor at Boston College, there are several changes that Trump could legally implement as soon as he becomes president: ''He can repeal some of the initiatives that President Obama had brought to bear, the DACA [Deferred Action for Childhood Arrivals] and so-called DAPA [Deferred Action for Parents of Americans] programs. Those two can be repealed because they were executive orders to begin with."

Almost 2 million people are eligible for DACA, which provides work permits and temporary reprieve from deportation, and the government has received almost 850,000 applications, according to the Migration Policy Institute. Their futures, many feel, are now in doubt. DAPA, which would have given a similar reprieve to the parents of DACA-recipients and US citizens, was effectively halted when  the Supreme Court tied in its ruling on a case challenging the actions.

"He could increase pressure on states and localities that are not cooperating with immigration enforcement, he could do things to restrict admissions by executive order. He could toughen up arrest and detention policies," he says. But, Kanstroom adds, it's important to remember that there are legal limits to what Trump can do as well.

"People do have rights in this country, regardless of their status,'' he says. ''The due process protections can certainly not be eradicated by the stroke of a pen of a president, and would constitute an important break on many of the iniatives that he may be thinking of.''

Alvarado says members of his organization are preparing for the new Trump administration.

“Of course there is widespread fear,” says Alvarado, ''but also there will be widespread resistance to whatever they do. If they think that we’re going to go quietly into the night, without putting up a fight, they’re essentially wrong."

In a statement, the National Day Laborer Organizing Network said they will wait and see what the Trump administration actually does, but will confront his actions if necessary.

"We will fight in every setting possible," Alvarado says. "Always as we have done, in a peaceful and orderly manner.”