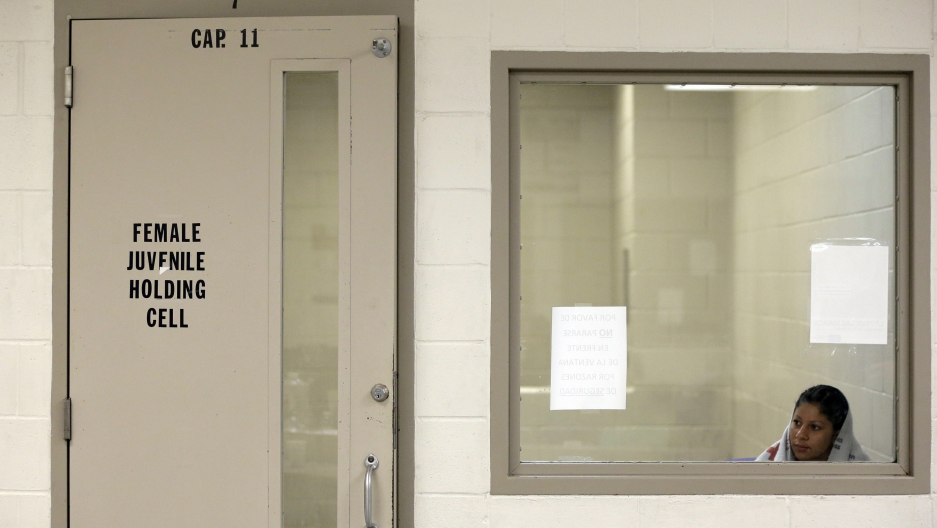 A detainee sits in a holding cell at a US Customs and Border Protection processing facility in Brownsville, Texas on June 18, 2014. According to data from US Immigration and Customs Enforcement, many of the migrants who are detained end up in facilities operated by private companies.

The Justice Department announced today that it would the end use of private prisons, phasing them out as contracts end over the next five years.

It's a decision that will affect some 200,000 federal inmates. But there's more than 2 million people incarcerated in the US at all levels, according to the US Bureau of Justice Statistics. And that doesn't include migrants who are also in the custody of the US government.

"While the Justice Department's announcement that it will end or limit its ties to the private prison industry is momentous," says César Cuauhtémoc García Hernández, an immigration and criminal law professor at the University of Denver, "it does nothing to alter the Department of Homeland Security's significant reliance on private prison operators to confine hundreds of thousands of migrants every year."

For anyone following the reaction to the closure of private prisons, the names of the companies involved with immigration detention should sound familiar: Many migrants are held in facilities operated by the GEO Group, Corrections Corporation of America and Ahtna Corporation.

TRAC, the Transactional Records Access Clearinghouse at Syracuse University, collected data on US Immigration and Customs Enforcement (ICE) facilities for the 2015 fiscal year.

More about TRAC: These open government advocates are suing the federal government for access to immigration data

They sued ICE for information about how many people were booked into and out of their facilities. In one year, 325,209 people were processed through  these facilities — mostly to be deported, but also because they were released on bond or because they were found to have a lawful right to stay in the country. At the end of the year, almost 40,000 people were in ICE custody.

ICE used 637 different facilities to hold, detain or process people. Of those who were being detained, 72 percent had been held in facilities operated by private companies.

"These are the people who get exposed to their detention practices," says TRAC co-director Susan B. Long, including those of the private companies running many of the facilities.

The caveat here is that ICE provided TRAC with incomplete data, so these are likely underestimations, they say. What is clear is that hundreds of thousands of people are processed and detained in these facilities, many of which are privately operated, each year.

The Department of Justice memo, issued by Deputy Attorney General Sally Q. Yates (PDF), says that the draw down in federal use of private prison contractors is in line with a declining prison population. There were almost 220,000 federal inmates in 2013, compared to 195,000 inmates today, the memo says.

But a review by the department's inspector general released earlier this month says that private prisons, which hold 12 percent of the inmate population, have more "safety and security incidents per capita" than those operated by the Federal Bureau of Prisons.

ICE facilities too have been plagued by complaints about conditions, including health care and safety. Ongoing lawsuits, especially about the detention of children and families, have brought new data and stories to light about how long people are being detained and the conditions in which they are held.

In its most recent quarterly report to Congress, the Department of Homeland Security Office for Civil Rights and Civil Liberties said it had opened investigations into 172 complaints made against ICE in the first and second quarters of the 2016 fiscal year. 25 were related to the conditions of detention, six related to sexual assault or abuse and 141 — the vast majority of complaints the unit receives — related to mental and medical health care (PDF).

Also: These asylum-seekers are being forced to raise their kids in immigration 'jails'

The Huffington Post reported earlier in August that CCA is bracing to lose a large ICE contract for the South Texas facility in Dilley, Texas, if renewal negotiations fail. Last year, the facility generated $244.7 million, more than 13 percent of CCA's total revenue.

ICE spokesperson Jennifer Elzea said in a statement that the agency is "committed to providing a safe and humane environment for all those in its custody." She also pointed to multiple levels of oversight within DHS, including the Office of Civil Rights and Civil Liberties. ICE officials say that the Department of Justice decision today does not apply to them, and that they use detention only while awaiting the outcomes of immigration cases or in order to carry out removal orders.