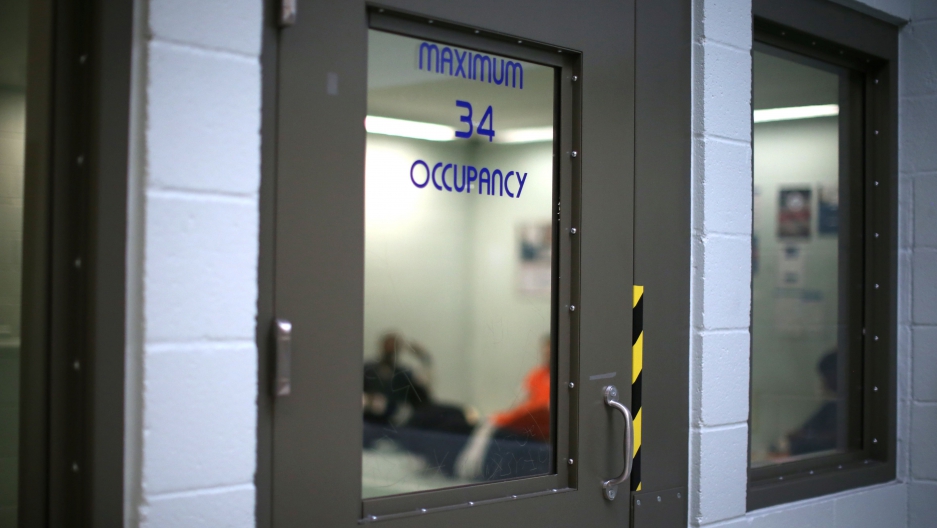 Immigrants sit in a cell for incoming ICE detainees at the Adelanto immigration detention center, which is run by the Geo Group Inc (GEO.N), in Adelanto, California, on April 13, 2017.

For much of the 20th century, immigration detention was a concept that was scoffed at. But today, the practice of apprehending immigrants and holding them in custody has created a shadow prison system, served by hundreds of federal and private facilities throughout the country.

Ralph Alhassani is a member of the LGBT community from Ghana — he felt persecuted there and sought asylum in the US in September 2015. He entered from Mexico and quickly apprehended by ICE. He was initially held in California for eight months and has been held in New Jersey for the last nine months.

After he was released in California, he was instructed to report to ICE regularly. Alhassani moved east, and in the summer of 2016, an officer decided that he should have never been released.

“I was given a form to always report to ICE, and I did report all the time,” he says. “But then I met an ICE official, whom I explained my situation to — he was wondering how I was released, but [still] had to report all the time. So, I told him I was given a bond of $35,000 by a judge. So, he was like, ‘No it's not supposed to be that way.’ He asked me to come back in January 2017. But on the August 12, 2016, ICE said they wanted to see me on August 15. So, on the 15 when I went, they said they were going to cancel the bond because my case was not appealed."

Since then, Alhassani has been in detention in New Jersey.

“I don't really know what is happening,” he says from a scratchy phone line inside the detention center. Like other inmates, Alhassani is not allowed to receive calls. He can dial out at certain designated times that come with strict time limits, often at a very high price per minute.

Nowadays, his hope and patience are running out.

He later continues: “You have to be locked up during count, you have to be locked up when you're about to eat, and you have to be locked up when you're going to sleep. I want people to know that immigration detention is not a good thing at all. ICE is not treating us with justice. Because if I was allowed to pay bond and then come out of detention, why should I be detained again? Why should I be detained? I know United States believes in justice, the whole world — everybody knows that. And then after coming all the way from my country to this country to have my freedom, I’ve been treated like this. I don't think this is fair. So, if there's anything people could do to help people like me. … I would be most grateful. And that is my message."

Alhassani has committed no crime.

Yanet Candelario Salazar is a 39-year-old with dual Canadian Cuban citizenship. She was stopped by ICE and was initially held at the Elizabeth Detention Center in New Jersey, which is now part of the Orange County Correctional Facility in New York, where she is with a mixed inmate population, even though she has a green card pending and has committed no crime.

“I am in a dorm with about 50 beds, about half of the inmates here are people with criminal convictions or waiting to be convicted,” she says from inside the detention center. “I have adjusted to the lack of any freedom. The human rights abuses that I've seen there are unbelievable. The things that I've seen in here, I mean, I was in detention with a woman who was 83 years old and very frail, detained for like three weeks.”

Candelario Salazar came to the United States three years ago. She was fleeing an abusive relationship in Canada and wanted to be close to her son and her sister, both of whom live in the US.

“I mean, I am a regular citizen,” she says. “I used to do volunteer work. I don't break laws. I couldn't begin to imagine this, and even when I got here, I thought this was a mistake and they were going to release me shortly. It is unbelievable. I still cannot believe that I said I'd be here for a few weeks or a month, and I have lost any money that I have … I mean, the weight of my child, his grades have suffered and he's been on his own this whole time.

“It was devastating to listen to that call knowing that she is in distress not having her son by her side,” says Sally Pillay, the director of First Friends, an immigration advocacy group that has set up a free hotline for people in immigration detention to call and seek support.

She is keenly aware of the challenges faced by people like Alhassani and Candelario Salazar.

“We get different stories from different days, sometimes it’s heart-tugging and I have tears in my eyes with some of the stories that individuals will share with us,” Pillay says. “In particular, recently, we’ve been getting a lot of calls about how people are being picked up in communities, apprehended, especially when they go to ICE reportings, to ICE check-ins, and then are being re-detained. Or they are just being picked up on random traffic violations, where ICE is present at courts.”

She later adds: “We need policies and reforms that are just and humane. Right now, that is not the case.”