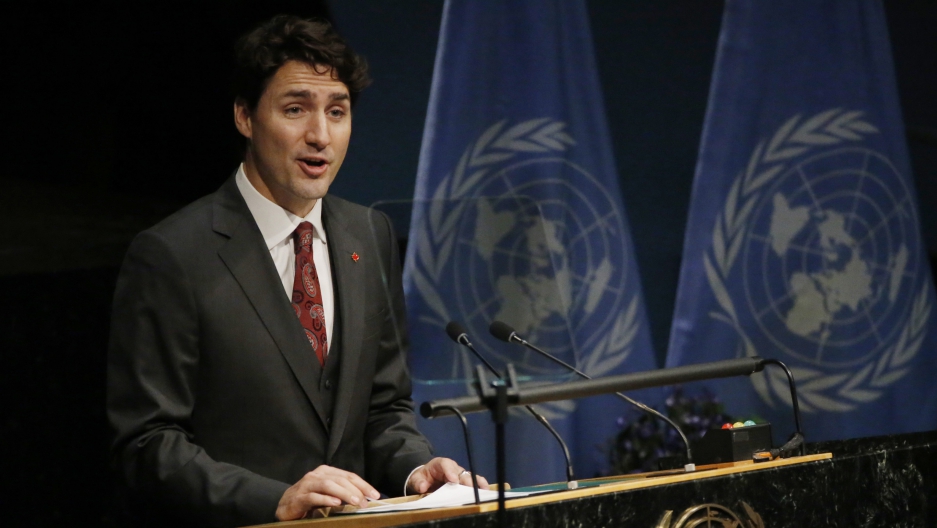 Canadian Prime Minister Justin Trudeau speaks at the signing ceremony on climate change at the UN in 2016. Trudeau has committed Canada to steep reductions in carbon pollution, while pushing to expand tar sands oil production.

For a lot of Americans these days, Justin Trudeau is the anti-Donald Trump, especially on things like climate change.

While President Trump moves to pull America out of the Paris climate accords, Canada’s prime minister describes carbon pollution as one of the globe's biggest dangers. And not long after taking office in 2015, Trudeau unveiled a sweeping national plan to pivot Canada to a new economy based on renewable energy. He called it a “down payment on [a] cleaner future.”

Trudeau’s plan is bold. He wants to end Canada’s use of coal to generate electricity. He’s proposed a national tax on carbon pollution, and he wants to make big investments in clean energy technology.

This is the Justin Trudeau who grabs headlines in the US — green and progressive.

But Trudeau sounds like a whole different politician when he talks about Canadian oil.

“We’re on our way to getting three new pipeline projects underway, which will help connect Canada’s oil patch with energy markets around the world,” Trudeau told a gathering of oil and gas executives in Texas earlier this year, to much applause.

The oil in Canada’s tar sands region in Alberta is one of the biggest reserves in the world, and despite his promise on carbon pollution, Trudeau is determined to keep it flowing.

Related: This Canadian oil pipeline could cause the next great controversy

“No country would find 173 billion barrels of oil in the ground and just leave them there,” he told his Texas audience.

Canada is already the biggest foreign supplier of oil to the US. But like his predecessor, Conservative Stephen Harper, Trudeau wants to reach more markets. And he has pushed even harder than Trump for controversial pipelines like Keystone XL to do that.

Oil and natural gas revenue are key to Canada’s economy and help pay for a lot of the country’s big social programs that some Americans envy, like its national health care system.

The catch is that the tar sands produce some of the filthiest oil in the world, and critics say continuing to dig it up will turn Trudeau's climate promises to smoke.

"He's as big a hypocrite as there is,” says Bill McKibben, one of the leading climate activists in the US. "I don’t know whether he’s confused or if he’s just a straight up liar, but those seem like the two possibilities.” 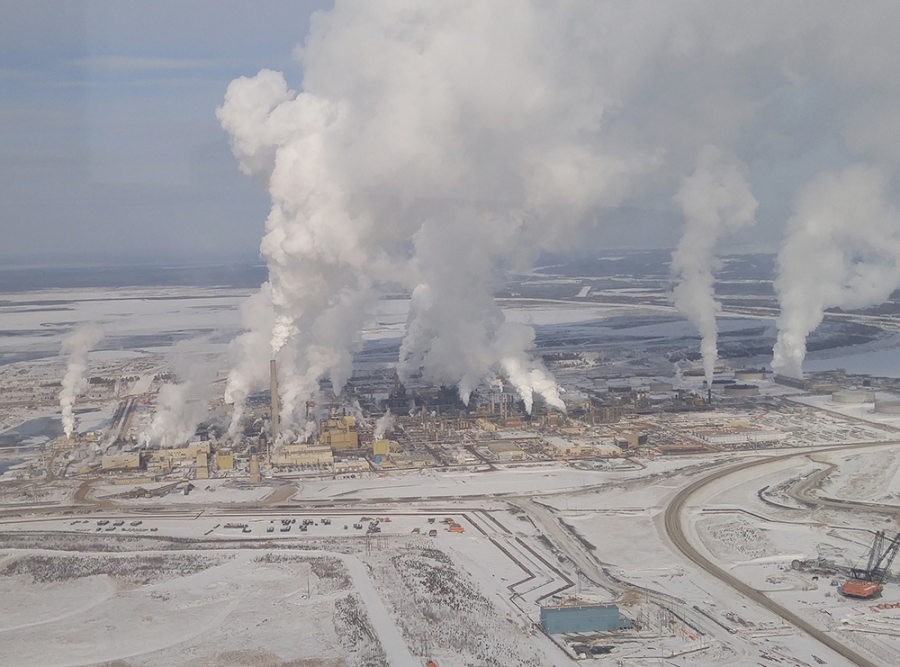 Trudeau's balancing act is bringing similarly harsh language from the other side.

“You’re either a liar or you’re confused,” oil worker Merle Terlesky told Trudeau at a town hall meeting in Alberta. “I’m beginning to think it’s both. ... You cannot come down to this province and attack the single biggest employer.”

Oil drives Alberta’s economy and culture more than any other part of Canada. There’s a reason their NHL hockey team is called the Oilers. And many people in the province share Terlesky’s skepticism. They believe his carbon tax and other environmental measures will put their industry at a competitive disadvantage.

But growing that industry comes at a huge cost — not just more carbon pollution, but also destroyed forests and massive strip mines.

Flying over the tar sands in a small plane reveals mile after mile of forest scoured away by trucks and bulldozers as big as office buildings. 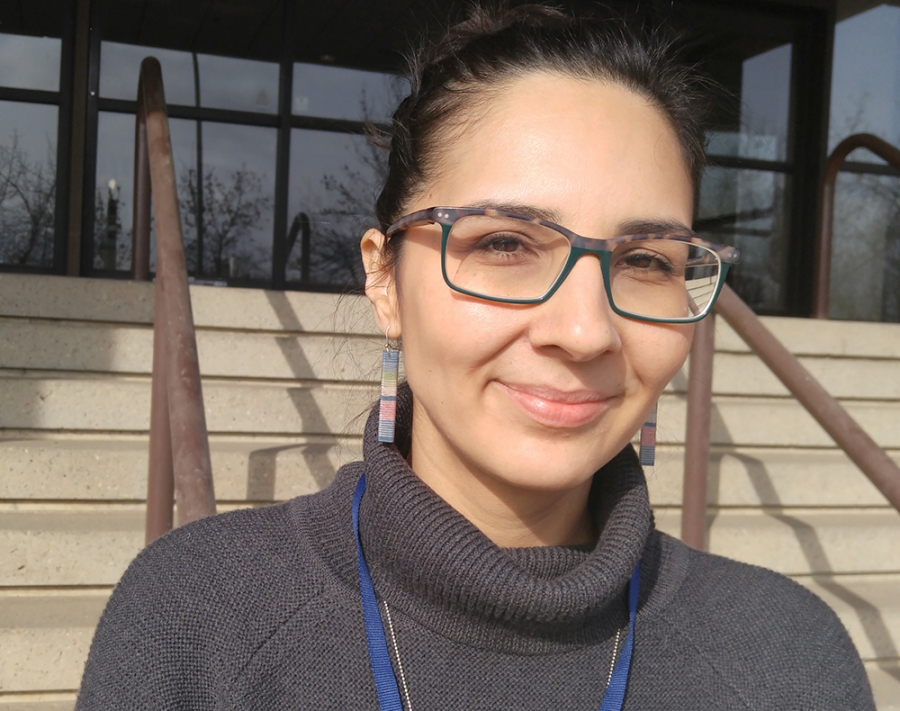 Sludge pools the size of lakes are filled with contaminated wastewater. There are massive yellow pyramids built entirely out of sulfur squeezed from tar sands oil.

“There are people who have referred to it as looking like a war zone or like Mordor,” says Eriel Deranger, an Athabasca Chipewyan First Nations activist and founder of a group called Indigenous Climate Action.

She says Trudeau’s push for tar sands development has put the prime minister at odds with many aboriginal communities.

“These places that I once knew as a child were literally bulldozed over. It’s a very visceral sense of death,” Deranger says.

But there's another big wrinkle. Under the Paris accords, carbon pollution is measured in the country where fossil fuels are burned, not where they’re produced.

So, it’s possible Canada will soon be bragging about significant cuts to carbon pollution at home while contributing to a spike in pollution elsewhere.

In fact, Trudeau is so committed to boosting Canada's oil exports that he appointed a trade lawyer, not a scientist or energy expert, to serve as Canada’s minister of the environment and climate change.

“I’m as much an economic minister as I am an environment minister,” says Environment Minister Catherine McKenna. On a recent visit to Washington, she boasted about Trudeau’s success at that oil industry conference.

“Who would have thought, the prime minister got three standing ovations from oil and gas companies,” McKenna said. “He made the case the environment and the economy go together.”

But even some of Trudeau's strongest supporters say the line Trudeau is trying to walk — climate change warrior and "Big Oil" champion — just doesn't work. Elizabeth May, who leads Canada’s Green Party, describes the prime minister as a friend, and she says she’s convinced Trudeau understands that tar sands oil is a threat to the planet.

“It’s not a political test” for Trudeau, May says. “It’s a test of character. What’s more important? Your kids’ future? Or a standing ovation in Houston?”

So, there are a lot of unanswered questions about Justin Trudeau’s leadership in the fight against climate change.

What's certain is that the pipelines and refineries Trudeau is pushing for will tie Canada’s economy — and the world’s — to tar sands oil for decades to come, even as the impacts of climate change that he warns about continue to mount.

Related: In Canada, Harper's out, but the Keystone pipeline may not be

Canada emerging as a nearby energy giant