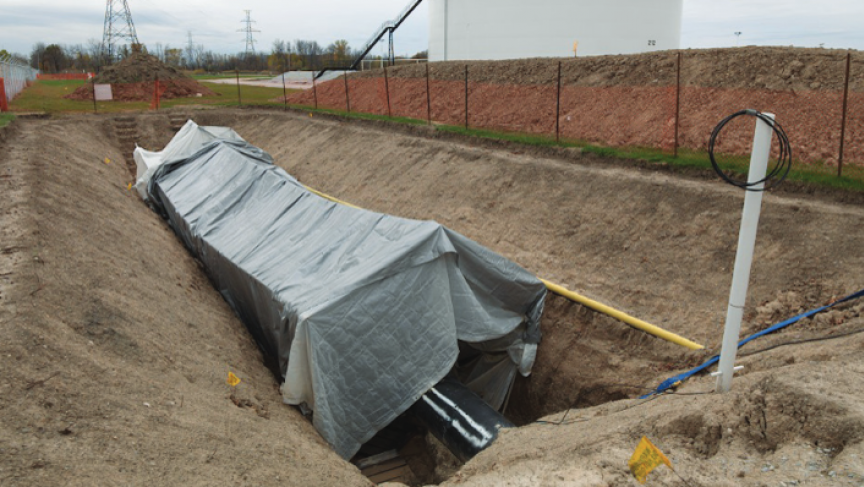 A section of Enbridge pipeline lies under a cover in a trench.
Credit:

In the early 20th century it was Canada that imported oil from the United States. Now it’s the other way around. The US gets more oil from Canada than any other country. But that might be news to a lot of Americans.

“I don’t think most people realize that we get most of our energy imports from Canada,” says Denise Hamsher, director of planning at Enbridge Energy Company, which builds pipelines.

“We all think of the Middle East. And collectively those countries surpass that. But no individual country comes close to Canada,” she says. “And that’s expected to grow.”

Hence the construction of new pipelines—particularly from the oil sands of northern Alberta, which are some of the largest in the world.

Enbridge is currently building a pipeline from the region called the Alberta Clipper that will stretch a thousand miles from Alberta to the city of Superior, Wisconsin at the western edge of the Great Lakes.

It’s quite a feat, and along the route you see signs of the construction everywhere. Trenches being dug, holes being bored under rivers and roads, the pipeline itself being assembled and dropped below ground.

And hundreds of pipeline workers, many of whom have come up from down south to work on the job.

The influx of workers has been a boon to the small college town of Bemidji, Minnesota.

“From a purely short term economic standpoint it has been a gift from heaven,” says Bill Batchelder, owner of Bemidji Woolen Mills.

“Our average ticket sale is 59 dollars. With the pipeline the average sale is 250 dollars,” Batchelder says, for items ranging from boots to minus-33 merino wool underwear to balaclava face masks.

But not everybody loves the pipeline. In fact at least a few in Bemidji are really unhappy about it.

“The pipeline has come through our property and against our wishes taken, in our case, 11 acres of property that we did not want to give up,” says business owner Charles Worms.

“It was all heavily wooded and we lost not only the mature trees but all the undergrowth,” Worms says. “We’ll never see that again as long as we live. It’s affected us to the point where we’re considering relocating.”

But the strongest opposition to the pipeline is not from land owners. It’s from environmentalists.

“It’s just a big mess around here,” says Marty Cobenais of the nearby Red Lake Tribe.

Cobenais works with a group called the Indigenous Environmental Network. He’s worried about almost every aspect of the pipeline, from the loss of trees to the potential for oil spills to the pollution from oil sands development in Canada.

And he’s worried about impacts on Native people on both sides of the border.

“We all feel very connected to Mother Earth, what we call her,” Cobenais says. “Turtle Island, North America. What this is doing is putting scars on her. We’re trained that we’re supposed to take care of our Mother Earth… She’s at a breaking point right now. If we don’t take care of her now, we don’t know how long we’ll have her anymore.

Canadian journalist Andrew Nikiforuk has written a whole book about the problems associated with oil development in Northern Alberta. It’s called Tar Sands: Dirty Oil and the Future of a Continent.

The word tar refers to a substance called bitumen, which is the source of the oil. Nikiforuk says you can mine some of it, but the really deep stuff has to be steamed out of the ground.

“So this is a hydrocarbon that comes with a much greater water footprint, carbon footprint, energy footprint, environmental footprint” than conventional crude.

Activists who want to stop oil sands development had hoped to slow its progress by blocking new pipelines like the Alberta Clipper. But so far at least, their fight seems like too little too late.

The Obama Administration approved the necessary permit for the pipeline to cross the border back in August. There’s a lawsuit challenging that permit, but meanwhile the pipeline is well on schedule for completion.

“The Alberta Clipper is really part of a trend of the U.S. building the infrastructure to expand its dependence on fossil fuels, and on sort of the very worst of the fossil fuels,” Casey-Lefkowitz says.

She says that’s exactly the wrong way to go at a time when the United States is ostensibly committing to clean energy.

But Enbridge’s Hamsher argues that pipelines don’t create demand. The demand is already there.

“The last time you climbed on a plane out of the Minneapolis hub or Chicago hub or heated a home in this area or drove a diesel truck, particularly in the Midwest, that transport was fueled by crude oil that originated from Alberta’s oil sands,” Hamsher says.

“That won’t be replaced by wind mills. It can’t be. We aren’t driving cars and flying jets by windmills or solar energy yet.

Hamsher and others argue that Canadian oil represents a reliable source of energy from a friendly country at a time when U.S. national security concerns and energy independence are paramount.

It’s bitterly cold back in Bemidji these days, rarely getting above zero degrees Fahrenheit, the kind of whether in which you let your car warm a while before you get into it.

Still, Marty Cobenais thinks the political and environmental costs of all that oil are too high.

“You have to try and find out other alternatives,” Cobenais says. “You can’t sit and keep destroying everything all the time.”