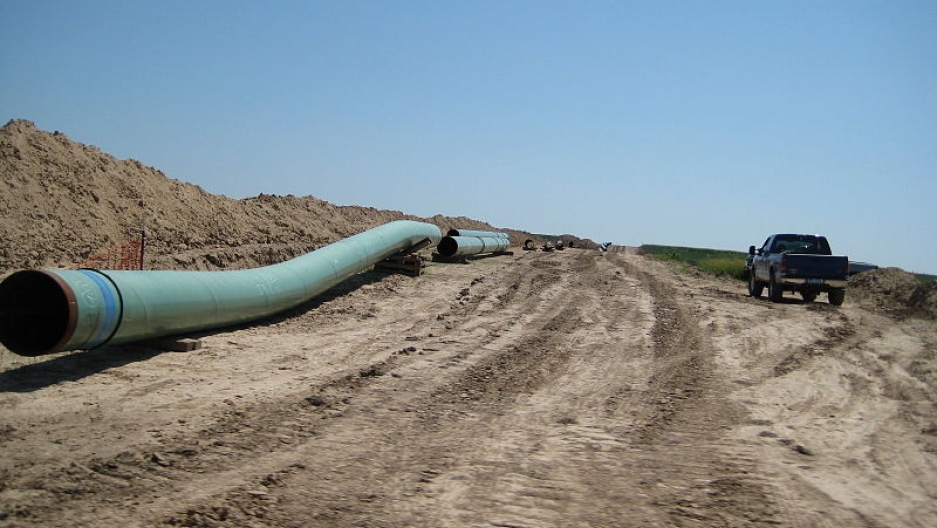 Pipes for the Keystone pipeline are prepared for installation in Nebraska in 2009. (Photo by shannonpatrick17 via Wikimedia Commons.)

A few years ago, I traveled to far northern Quebec, paddling the wild Rupert River, where I spotted a gray wolf prowling the banks.

It’s the vision of Canada most Americans probably conjure up: empty, pristine and incredibly beautiful.

But recently Americans have been getting to know another Canada, the one at the center of the pitched political battle over the proposed Keystone XL oil pipeline. The pipeline would link oil fields in Canada to refineries on the Gulf coast of the United States. Supporters say it would be a safe and reliable source of oil for the U.S., but opponents say the oil it would pump, from the Alberta “tar sands,” is among the dirtiest in the world, and would make an outsized contribution to climate change.

The proposed pipeline is one of the hottest political footballs in Washington, and the debate has illuminated Canada’s little known role as a major energy exporter. Keystone or no Keystone, the truth is that Americans are already drinking buckets of Canadian oil.

Canada is now the largest single foreign supplier of oil to the U.S., delivering nearly twice as much each year as Saudi Arabia. And in fact Trans-Canada, the company that wants to build the Keystone project, already operates a massive pipeline grid that stretches from Alberta to Oklahoma, and carries about 570,000 barrels of oil a day to the US

Ninety percent of natural gas imports to the U.S. are also piped in from Canada. And in the Northeast, one out of every six homes and businesses runs on Canadian electricity.

And there’s more on its way. The Toronto-based company TDI is developing a new $2 billion dollar power line that will feed electricity from what company chief Donald Jessome calls Canada’s great hydro and wind resources” directly to New York City.

“Canada need markets” for that power, Jessome said. “A thousand megawatts is approximately enough energy for a million homes, so it’s a fairly significant injection into the New York market.”

Industry groups in Canada say the growing interconnection is a perfect fit: their country’s huge energy resources will fuel America’s huge energy demand. And they’ve been airing ads in the U.S. putting a positive spin on what they call oil sands by arguing that Canadian energy will help free the U.S. from reliance on countries in the Middle East.

“Why are we paying their bills and funding their oppression?” the ad’s announcer asks. And then promises, “today there’s a better way, ethical oil from Canada’s oil sands.”

For Canadians, the energy boom has meant new prosperity. Canada was the first G-8 country to emerge from the global recession, and a lot of economists say energy exports fueled the recovery.

But critics say the environmental costs have been staggering.

In 2009, a year after I paddled that wild northern river in Canada, a government agency called Hydro Quebec diverted much of its water, siphoning it away into a massive man-made complex of reservoirs.

Geologist Phil Royc, at St. Lawrence University in New York, said the project “drastically changed the Rupert River, a traditional river that’s been paddled for hundreds and hundreds of years by the Cree Indians.

“From a purest wilderness standpoint, it definitely makes me sad to see it all happen,” Royce said.

Royce, who’s been studying the impact of big hydro in northern Canada for seven years, said a chunk of Quebec the size of Connecticut has been industrialized. Rivers have been dewatered. Wolf and caribou habitat is criss-crossed by roads and power lines, with more big dams in the works.

“The next section, the Phase 3 that they’re looking at, in terms of the Little Whale, the Great Whale, the Nastopoka, are some of the most beautiful, pristine rivers that I’ve ever paddled,” Royce said.

Others share those concerns. Elizabeth May, head of Canada’s Green Party, said the direct damage from tar sands oil development in western Canada is even more troubling.

“Some of the largest man-made structures in the world are the dams that hold the thousands of square kilometers of toxic waters and tailing ponds,” May said. “Those tailing ponds are leeching into the Athabascan River. The whole project is an abomination.”

May acknowledges the energy boom has meant jobs and tax revenues. She said it’s inevitable her country’s vast resources will be developed over time. But May thinks Canada’s accelerating energy “gold rush” is forcing people here to look in the mirror, questioning their cherished image as environmental leaders.

“We never had a record that matched our reputation,” May said. “We’ve been coasting for years on natural beauty and on a time when we were in the lead.”

He’s pledged to keep pushing Washington to open the border to more oil, electricity and natural gas as well.