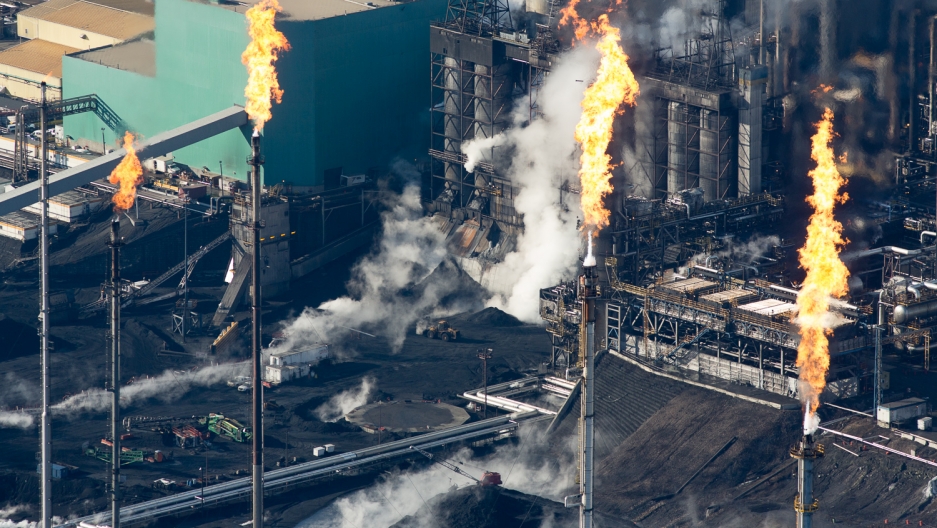 Aerial photographer Alex MacLean brought an audio recorder with him on his flights over the Alberta Tar Sands. Go along for the ride and hear Alex's descriptions and observations in this exclusive audio journal, produced by Daniel Grossman and Peter Thomson for The World and GlobalPost's GroundTruth Project.

Violet Clarke’s home sits virtually in the center of the vast Athabasca tar sands, a colossal deposit of extremely heavy crude oil in the western Canadian province of Alberta.

She vaguely recalls seeing the gooey black stuff, which seeped naturally from the banks of the Athabasca River, during her childhood. Her father, a Cree Indian, slathered handfuls of the foul-smelling heavy oil, known as bitumen, over his birch canoe to seal it. He hunted bear, moose and elk, butchered them and smoked their flesh. In the summer Clarke picked and dried berries.

“We lived clean, healthy lives,” says Clarke, 86, sitting by a window in her battered mobile home. But over the past four decades, bitumen and the economy it has birthed have dramatically changed her life. A snarling complex of mines, pipelines, waste ponds and processing plants now lives atop the tar sands, one of the largest concentrated industrial activities on earth. Giant earth movers claw into black seams of the bitumen around the clock. Forests of factory stacks reach to the sky, lighting the land with smoky flares at night.

Alberta contains about 170 billion barrels of reasonably accessible oil, the world’s third-largest supply after those of Saudi Arabia and Venezuela. The sea of crude sits underneath an Iowa-sized territory of rolling hills and valleys of peat bogs and forests of fir, polar and aspen. A valuation of more than a trillion of dollars has caused a stampede of investment from the big oil companies, including Shell, ExxonMobil, Sinopec, Chevron and ConocoPhillips. All of Canada’s top oil producers, while not large on the world stage, are also feasting on Alberta’s lucrative oil bounty.

The TransCanada Corporation is building a network of more than 3,000 miles of pipelines to give Alberta’s tar sands oil greater access to refineries in the US. The final phase of the pipeline project, Keystone XL, would run more than 1,000 miles, with capacity to ship nearly a million barrels of oil a day from Alberta into America. If built, the XL pipeline would approximately double the amount of oil from Alberta that could flow into the US. 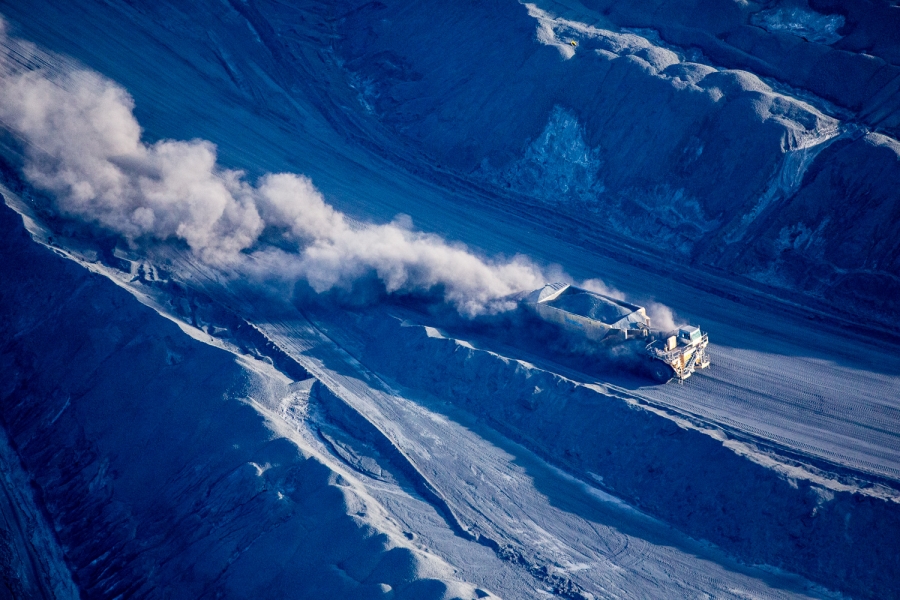 Some of the most powerful environmental groups in the US and Canada, such as Greenpeace, the Sierra Club and the Audubon Society oppose Keystone XL. These groups call tar sands production an unfolding environmental catastrophe that is polluting land and water; disrupting wildlife on a massive scale; and harming the climate by abetting use of fossil fuels.

It’s “the most controversial and highest profile environmental issue in the country, says Keith Stewart, the leader of Greenpeace Canada’s anti-tar-sands campaign. Last fall police in Vancouver arrested Stewart after he chained himself to the gate of the Kinder Morgan oil terminal. Kinder Morgan has proposed to expand a pipeline between Alberta and Vancouver, shipping oil from Vancouver through biologically sensitive waters by tanker.

Until the 1970s, the oil in Alberta remained mostly untapped. Supplies elsewhere dwindled, mining and processing techniques advanced and an industry refining crude oil from bitumen took hold. It expanded quickly. Production has about doubled every decade since. Industry experts expect it will double again by 2022. That won’t happen unless the industry surmounts a stubborn obstacle: how it can ship more of its purified bitumen (a thinned product suitable for transport) to distant domestic and international markets.

Alberta’s producers hope that the proposed Keystone XL pipeline will handle a big share of the increased production. But first, a political tangle of regulatory and legislative players, ultimately including President Obama, must approve the project. Climate change activists adamantly oppose it. They say an administration decision to prevent the pipeline would slow growth of tar sands production and, thus, would cut fossil fuel use, an imperative climate scientists say must come soon to avert catastrophic changes in the climate. The activists point out that it takes much more energy to produce a gallon of fuel from tar sands than from conventional crude deposits, making Alberta’s bitumen especially damaging.

Americans have mostly debated the global impacts of the tar sands; but Canadian opponents also worry about the vast damage to people and to Alberta’s environment. The “terrestrial impact is huge,” says David Schindler, about the vast mining complex, and the air and water pollution it has caused. Schindler, a fresh water biologist and emeritus professor at the University of Alberta, has studied the effects of tar sands activities for decades.

“By tainting local land, water and wildlife, mining has robbed indigenous [First Nations] people of their subsistence livelihood,” he says.

“They were guaranteed that [the land] would support them forever more,” says Schindler. “It doesn’t take much brain power to see that there’s no subsistence to be made from that mined area.”

He adds that even far from actual mining sites, contamination makes a traditional subsistence lifestyle iffy.

“Even if [wild animals] aren’t too polluted to eat, no white merchant could sell them in a supermarket. Why should people eat them with lesions and tumors?”

A study released Monday by the University of Manitoba found “wild-caught foods in northern Alberta have higher-than-normal levels of pollutants the study associates with oil sands production, but First Nations are already shifting away from their traditional diets out of fears over contamination.”

And Canadian government research published earlier this year has confirmed that toxic chemicals from tar sands production are seeping into the Athabasca River.

Violet Clarke says the industry has destroyed even the possibility of their traditional lifestyle. She says that forest clearing and the roar of processing plants has scared away moose. Willow Lake’s pike and walleye have absorbed high levels of mercury into their flesh. She’s heard stories of deformed fish. “Now we just have to go to the store and buy our meat,” she says. “We are seeing the end of our livelihood.”

Some locals refer to Fort McMurray, the de facto capital of the tar sands, as Fort McMordor — the mines and factories nearby bring to their minds gloomy, fire scarred scenes from Peter Jackson’s film rendition of "The Lord of The Rings." Some locals joke that it is Fort McMoney, bringing riches in, though not necessarily to them. Visitors not there on official business that takes them inside company gates will find it difficult to discern the scale and scope of the industry; though everyone knows it’s huge.

This is where Caterpillar, the world’s leading manufacturer of heavy construction and mining equipment, has sold half of its ultra class dump trucks — each big enough to hold a suburban starter-home in the bucket. In foul lagoons throughout the development sit about 190 billion gallons of fetid water tainted by tar sands.

The mines and processing facilities hide deep within company property, accessible only on company roads, blocked by company fences. Publicists at Calgary-based Suncor boast that the company has completed the first successful cleanup of a waste pond, with what is actually a two-foot layer of topsoil planted with trees and shrubs, covering a mountain of dry toxic tailings.

Today uttering “tar sands” around Fort McMurray, rather than the sanitized “oil sands,” seems to identify a speaker as suspiciously sympathetic to Greenpeace, or worse. Canada’s national government has allocated more than $20 million on an advertising blitz promoting Canadian oil and gas in the US, Europe and Asia.

In this atmosphere, gaining a candid, non-corporate view of the vastness of the dirt that the mining companies have moved literally required going over the heads of guards and cautious “media relations” officials who protect these sites from non-corporate outsiders.

It took a flight in a private plane. Earlier this year, aerial photographer Alex MacLean invited me to survey the tar sands from the air with him. He’d reserved a plane, complete with pilot, at Fort McMurray’s diminutive airport. Before long, we were in the air with a panoramic view of one of the world’s most lucrative, and most environmentally devastating, mining operations.

This story is cross-posted with our partners at The GroundTruth Project and GlobalPost. It was made possible in part by a travel grant from the Pulitzer Center on Crisis Reporting. Daniel's reporting on the tar sands continues with part two of this story at GlobalPost.