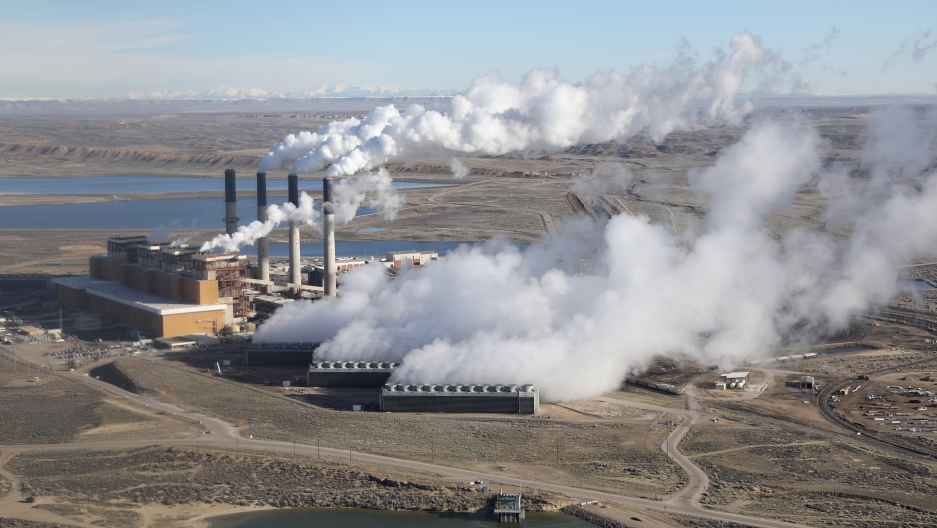 Coal-fired power plants like this one in Wyoming had been targets of Obama administration rules to cut US climate pollution under the Paris Climate agreement. President Trump hopes leaving the agreement and other policy moves will take pressure off the coal industry.

World leaders reacted with anger and defiance after President Donald Trump announced today that the United States was quitting the 2015 Paris climate agreement.

Led by Germany's Angela Merkel and France's Emmanuel Macron, leaders abroad branded Trump's decision as misguided and vowed to defend an accord they portrayed as crucial for the future of the planet.

European Commission chief Jean-Claude Juncker said there could be "no backsliding" on the deal and China, currently the world's top annual greenhouse gas emitter is also promising promised to uphold the pact.

Read more: What does the US leaving the Paris climate deal look like?

In his statement from the White House Rose Garden Thursday, Trump claimed the Paris deal would cost millions of American jobs and slowed economic production.

"I promised I would exit or renegotiate any deal which fails to serve America's interests," Trump declared in an address watched anxiously by leaders around the world.

"I was elected to represent the citizens of Pittsburgh, not Paris," he said.

As the Mayor of Pittsburgh, I can assure you that we will follow the guidelines of the Paris Agreement for our people, our economy & future. https://t.co/3znXGTcd8C

Trump continued, "I cannot, in good conscience, support a deal that punishes the United States — the world's leader in environmental protection — while imposing no meaningful obligations on the world's leading polluters," Trump said, before singling out China and India.

The decision and the rhetoric, says The World's environment editor Peter Thomson, are "typical Donald Trump. He sees the US as being the victim here, he sees us as being at the butt of everybody else's joke, everybody else's scheming, and that we are not going to put up with that anymore, we are going to fight back."

The commitments were also entirely voluntary, with no means of enforcement.

The decision also ignores the history of how we got here, says Beeler.

"The US has done a lot more historically since the industrial era to contribute to this problem," she says. "So saying that we are being unduly hampered by trying to do some part of reducing (emissions) has a very narrow view of what fairness means in terms of global climate change."

These facts are not lost on much of the rest of the world.

In an exceptional step, continental Europe's three biggest economies — Germany, France and Italy — issued a joint statement criticizing Trump's move and brushing off his offer of renegotiating the deal.

"We note the United States' decision with regret," they said, describing the carbon-curbing accord as "a vital tool for our planet, our societies and our economies."

On Friday in Brussels, Juncker opened trade and climate talks with Chinese Premier Li Keqiang with a promise to stick to the agreement, which aims to limit global temperature rises.

"Our joint leadership... makes a statement to the world: there is no reverse gear to the energy transition, there is no backsliding on the Paris agreement," Juncker said.

The United Nations said America's exit from Paris was a "major disappointment", with a spokesman for Secretary-General Antonio Guterres urging the US to remain a "leader on environmental issues."

Leaders of US industry and business groups also distanced themselves from the White House in the wake of Trump's decision.

Tesla founder Elon Musk confirmed he would quit White House advisory councils on business in protest, while Disney chief Robert Inger said he was resigning from the panels "as a matter of principle."

In his first ever tweet, Goldman Sachs CEO Lloyd Blankfein called the decision a "setback" for the environment and for US global leadership.

Merkel on Friday vowed "more decisive action than ever" to protect the climate.

"We in Germany, in Europe and the world will band together to take more decisive action than ever to confront and successfully surmount major challenges to humanity such as climate change," she told reporters.

In France, the presidential palace said Macron had phoned Trump to say that "nothing was negotiable" in the Paris agreement.

France and the United States "would continue to work together," but not on climate change, it said.

In a TV broadcast both in French and English, Macron cheekily adapted the nationalist slogan used by Trump on the campaign trail by urging climate defenders to "make our planet great again."

French former foreign minister Laurent Fabius, who helped broker the 2015 accord, said Trump's decision was "shameful" and a "major error."

Canadian Prime Minister Justin Trudeau called Trump to express his disappointment, but said he was inspired by "the growing momentum around the world to combat climate change and transition to clean growth economies".

Mexican ministers said the world had a "moral imperative" to live up to the Paris commitments, while Brazil's foreign ministry said it was concerned and disappointed by Washington's move.

In unusually strong comments, Japanese Environment Minister Koichi Yamamoto said: "It's as if they've turned their back on the wisdom of humanity.

"In addition to being disappointed, I'm also angry."

Poor countries and island states at high risk of climate change effects such as rising sea levels have asked major emitters to do more to halt global temperature rises.

Tuvalu Prime Minister Enele Sopoaga accused Washington of turning its back on his country in its time of need, despite their alliance during World War II.

"We provided our islands as a launching pad for them to achieve their objectives and now we are facing the biggest war of our time, they are abandoning us," he said during a visit to neighbouring Fiji.