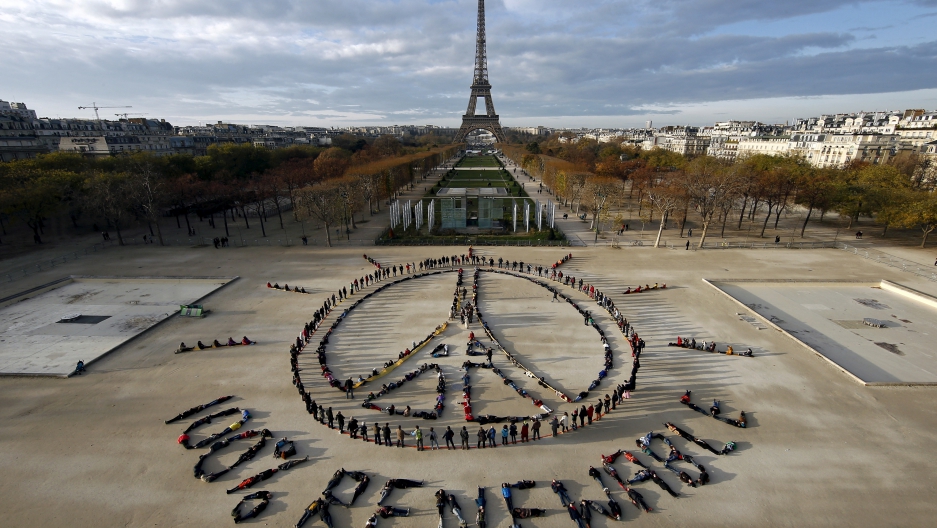 Hundreds of environmentalists arranged their bodies to form a message of hope and peace in front of the Eiffel Tower in Paris, France, in December 2015, as the UN climate change conference was happening on the outskirts of the city.

Speculation mounted Wednesday that President Donald Trump would pull the US out of the Paris climate change deal.

Multiple news outlets, citing unnamed sources, reported that the president plans to make good on a key campaign promise by removing the US from the 2015 agreement aimed at limiting global warming.

International leaders responded by reaffirming their commitment to the agreement, even if the US backs away.

The White House declined to confirm the reports, and President Trump tweeted Wednesday morning that he would announce his decision “over the next few days.”

I will be announcing my decision on the Paris Accord over the next few days. MAKE AMERICA GREAT AGAIN!

Nearly 200 countries are party to the agreement, which includes individualized carbon emission reduction targets set by each country. The stated goal of the document is to limit global warming to “well under” 2 degrees Celsius (3.6 degrees Fahrenheit), though current targets fall short of that mark.

If the US backs out of the Paris Agreement, what would that look like?

If, or when, President Trump does back away from the international agreement, climate experts say there are two main ways the US could do it.

The first option would be to exit the 2015 accord itself, but that would take nearly four years to fully execute. The agreement comes with a three-year moratorium on countries backing out of the agreement. After that “cooling-off period,” it takes a year for a notification of withdrawal to be finalized.

Backing out of the agreement that way would take time, but would make it easier for the US to return to climate change negotiations if a future administration would want to, says Andrew Light, a senior fellow at the World Resources Institute and a professor at George Mason University.

“[The US] can still keep some kind of presence in the negotiations, just as we did after we didn’t ratify the Kyoto Protocol, and serve as a placeholder for the US to eventually re-enter the world community on this issue,” Light says.

A second option would be quicker and more dramatic.

The Trump administration could withdraw from the entire United Nations Framework Convention on Climate Change, an international treaty ratified by the US Senate and signed by President George H.W. Bush in the 1990s. The UNFCCC is the body that created both the failed Kyoto Protocol and the Paris Agreement.

That option would be much quicker, taking only a year, but would be a more drastic move from the Trump administration.

“If the United States leaves the framework convention, the US will become a rogue state,” says Bangladeshi climate expert Saleemul Huq.

Backing out of the UNFCCC would be harder for future administrations to reverse.

Paul Bodnar, a former Obama climate change adviser, says it wouldn’t afford the US even a sideline view of the climate conversations.

“Countries are making decisions in that forum that affect the interests of the United States, and if you’re not even there to defend those interests, then you’re not fulfilling your duties to the American people,” says Bodnar, now the managing director of the Rocky Mountain Institute.

The Trump administration may or may not signal the mode of withdrawal if it does, in fact, announce that it will pull out of the agreement this week.

It may also direct the secretary of state and the EPA administrator to look at the Paris Agreement and determine whether it is in the interests of the United States.

That kind of an announcement could leave the door open for the United States to remain in the Paris Agreement with a revised target, a proposal some top aides in President Trump’s inner circle have supported.

Currently, the United States has committed to reducing carbon emissions between 26 and 28 percent below 2005 levels by 2025.

Those targets already appear out of reach with President Trump’s rollback of the Clean Power Plan and other Obama-era policies aimed at reducing carbon emissions.