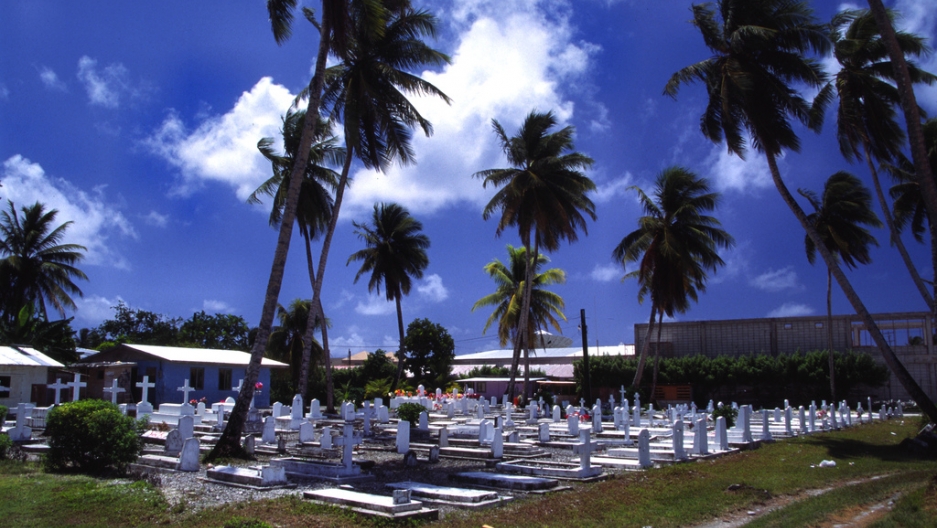 Chris Balos remembers first learning about climate change when he was in high school. At the time, he was living in Sacramento, and it felt like someone else’s problem.

But that changed when he started to read about rising sea levels in Facebook posts from friends and family. Though Balos has lived most of his life in the United States, many of his relatives still live in the Marshall Islands, the low-lying Pacific nation where he was born.

What Balos saw disturbed him. “Homes being flooded. Gardens being destroyed by saltwater,” Balos says. “I heard it got so bad that even the hospital was flooded.”

The Marshall Islands are vulnerable, and not just because of sea level rise. During World War II, the US seized the region from Japan. After the war, American scientists tested dozens of nuclear bombs there. Some areas, like Bikini Atoll, are still uninhabitable. (Below, a tweet from the Marshallese president.)

Today we honor victims of 67 US nuclear tests. @realdonaldtrump for America to be great again, there must be justice https://t.co/pyLl5y8BFT pic.twitter.com/l4QocjRmpn

In the 1980s, a treaty gave Marshallese immigrants the right to live and work in the US without a visa. That’s how Balos ended up here. He now lives in Springdale, Arkansas, which is home to the largest community of Marshallese in the country.

Recently, the effects of climate change became even more personal issue for Balos. Four years ago, his grandmother, Bokkie Matato, moved to Springdale to be closer to family, and to access medical treatments for diabetes.

Related: 70 years after the first bomb was dropped on their homes, some Bikini islanders are still awaiting compensation

She often talks about how she misses her home in the Marshallese capital, Majuro, where she used to keep an elaborate garden. “She’s well known on the island of Majuro for having some of the most unique flowers,” Balos says. “You would have people stopping by the house and looking at her garden, and sometimes she would give them seeds.”

One day, Balos asked his grandmother whether she’d ever heard of climate change. Matato — whom he calls “Bubu” — said she didn’t know much about the details. But she knew exactly what it meant in the Marshall Islands. She’d seen its effects on the graves of her parents.

When Chris Balos asked his grandmother Bokkie Matato about climate change, she told him that her parents' graves had been washed away.

“They put them ocean side, right next to the road,” Matato says. The white cement crosses had the names of her parents inscribed on them, along with the days they were born and died.

“The tombs are not there anymore,” Matato says. Balos explains that the graves were washed away by so-called “king tides,” which are higher-than-usual tides that come a few times a year. According to the Environmental Protection Agency, king tides provide a glimpse of future everyday water levels.

Related: The proud Pacific nation that preserves its homeland with the Bikini Anthem

Matato said that after the graves disappeared under the water, she started visiting the graves of strangers who were buried nearby. “I feel sad, but what can I do?” she says.

Despite what’s happened to her parents’ graves, Matato told her grandson recently that she still wants to be buried on the Marshall Islands.

“That’s where I belong,” Matato says. “No place like home.”

Balos feels deeply torn about his grandmother’s request. He wants to carry out one of her last wishes. But he also  believes the generations that come after him should be able to visit her grave.

Balos asked his grandmother what she thinks will happen to their home country. “It might sink,” Matato replied. “If the world comes and takes it away, there will be no Marshall Islands, because of the climate change.” She says she prays about it, and believes that it’s in God’s hands.

Chris thinks prayer helps, but says it’s not enough. “I believe the Bible also teaches us we have the hands to work,” he said. “We work.”

That, he says, is why he shares his country’s story.