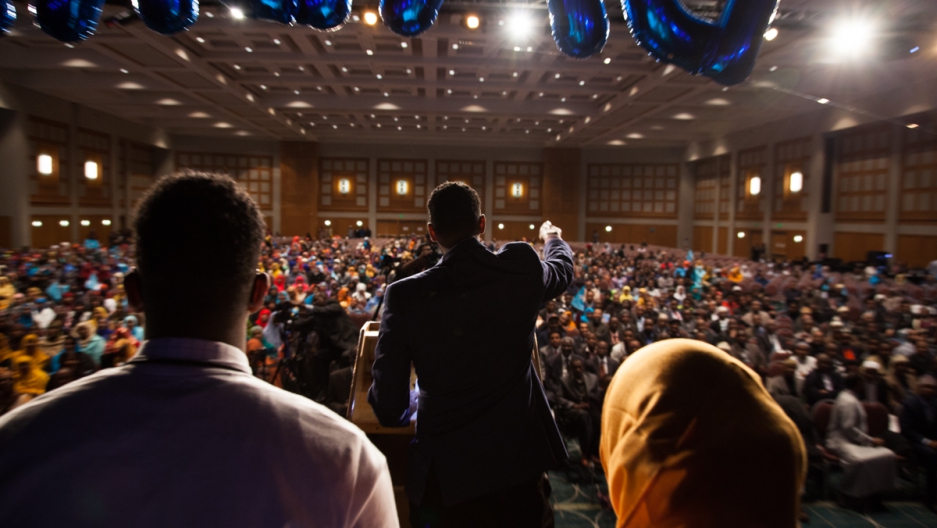 During a rally for the newly elected president of Somalia at the Minneapolis Convention Center, Liban Adam delivers a speech about the ongoing drought in Somalia. He and others in the diaspora and mobilizing online to help.

It was just two years ago that Liban Adam found himself in the shrublands in northern Somalia, crouched over a giant bowl of camel’s milk. The camel herder who gave it to him watched from behind, amused, as the 24-year-old timidly tasted the sour drink for the first time.

More than 20,000 other people also observed that moment after Adam posted a 40-second video of his experience on Facebook. It was one of many this social activist would share during his six-week trip to Somalia, entertaining thousands of followers among the Somali diaspora and cementing his status as a social media personality.

Today, Adam is harnessing that following to galvanize support for Somalia, which is on the brink of a famine that threatens the lives of an estimated 6 million people, according to the United Nations.

From his hometown of Minneapolis, Adam is still sharing videos of that vast shrubland, where low rainfall has devastated the animals that pastoralists depend on for their livelihood and sustenance.

“My Facebook feed is just horrifying,” he says, referring to the images of distraught mothers holding emaciated children. 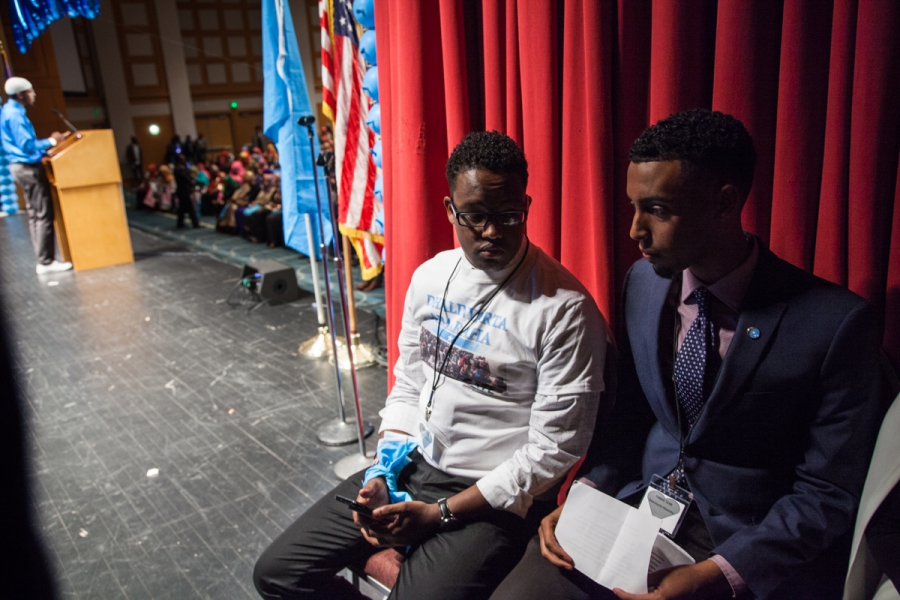 Liban Adam and Kali Mohamed wait to deliver a speech alongside Nadira Mohamed and Hafsa Jibril (not pictured) about the ongoing drought in Somalia. The team has managed to raise over $80,000, mostly via social media. In April, the crowdfunding platform GoFundMe itself pitched in an additional $10,000.

So Adam teamed up with high school friend Kali Mohamed to launch an online GoFundMe fundraising campaign for the drought victims. He’s using Facebook Live and Snapchat Cash — and the help of “social media warriors” Nadira Mohamed, 23, and Hafsa Jibril, 23. The team has managed to raise over $80,000 in one month.

Their effort is just one example of how social media has grown to play a uniquely important role within the Somali diaspora, connecting people who have been scattered across the globe by more than two decades of civil war in their home country.

But it’s more than a “social” phenomenon. The pervasiveness of social media among millennials in the diaspora is fertile ground for raising support for humanitarian causes in a way that was not possible before — by facilitating a real-time link to relief efforts.

Adam and Mohamed have done numerous fundraisers in the past, including for famine, burn victims and rape survivors. With each successive effort, social media played a more prominent role. So now, the team is using it “aggressively,” says Adam, “because the people are engaged, the comments are real-time comments, and there's the algorithm on Facebook. As soon as you go live, everyone, the first thing they see — 20,000, 30,000 people that follow you — first thing they see is you. ... Bam!"

On March 4, Adam and Mohamed broadcast a call for donations via Facebook Live from Mohamed’s attic in Minneapolis, with just a Somali flag draped behind them. It was a modest setup, but what was meant to be a 20-minute livecast wound up going almost an hour, as more and more people logged on to watch, comment and donate. Adam estimates that within 24 hours, donations to their campaign more than doubled, from $3,000 to $8,000. Over the following week and a half, he says the campaign took in an average of $4,000 a day — a tremendous amount that Adam and Mohamed say would have been impossible without these social media tools. 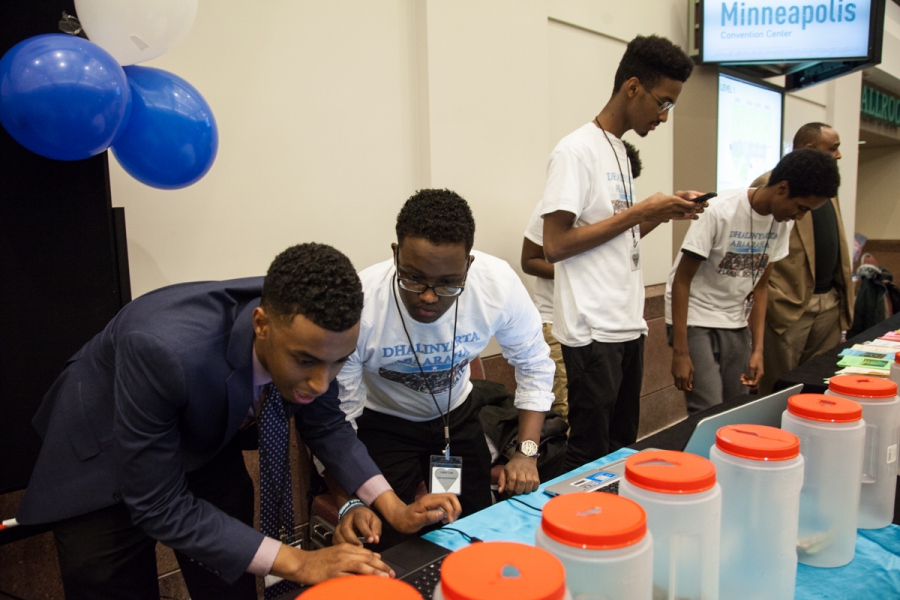 Singers and musical performances were eschewed during a celebration of the newly elected president of Somalia, Mohamed Abdullahi Mohamed, at the Minneapolis Convention Center. Instead, people were encouraged to focus their energy on supporting drought victims through fundraising efforts like Adam and Mohamed’s.

And they should know: In 2011, Adam tried raising money for famine relief by going door-to-door and calling and texting potential donors. Back then, neither Snapchat nor Facebook Live existed, and crowdfunding sites like Kickstarter and GoFundMe were in their infancy. He raised just $2,000 for the Somali humanitarian organization Adeso.

Apart from limited reach, another challenge to fundraising was disillusionment with foreign aid. Somalis cannot help but notice that billions of dollars in humanitarian assistance, administered by an entire industry of aid organizations, seems to have had an imperceptible effect on the impoverished nation. During the 2011 famine, Foreign Policy magazine took note as well: “For all the treasure expended there, Somalia is no closer to stability.”

Somalis in the diaspora have had little faith that their donations would ever benefit the people they were meant for. Instead of donating to nongovernmental organizations, Adam says, diasporans often prefer to send money directly back to their families using the traditional money transfer method called hawala.

That's why Adam and his team have chosen to give the money from their current campaign to three well-established, Somali-led organizations. They sent $20,000 to Amoud Foundation, a Somali-run humanitarian aid organization, in March. Amoud matched that donation with $35,000 of its own money, and spent the total on distributing food, water and plastic tent covers in the region of Baidabo. Photos show workers unloading trucks packed to the brim with rice, powdered milk and cooking oil, as crowds of people gather to collect it. Mohamoud Egal, president of the Amoud Foundation, says this money was enough to provide food for 1,150 families and water for 10,378 households.

Also: What to consider when you are considering donating

Egal says the Amoud Foundation has developed confidence with both donors and beneficiaries because people do not see them as a foreign organization giving out handouts.

"We are part and parcel of the landscape. ... We are part of the community,” he says. “That’s why we are effective.”

It’s important to be efficient, and this is where Amoud also has an insider advantage; they do not require a security escort, which can cost foreign aid workers hundreds of dollars a day and severely restrict operations in areas where the extremist group al-Shabab is active. 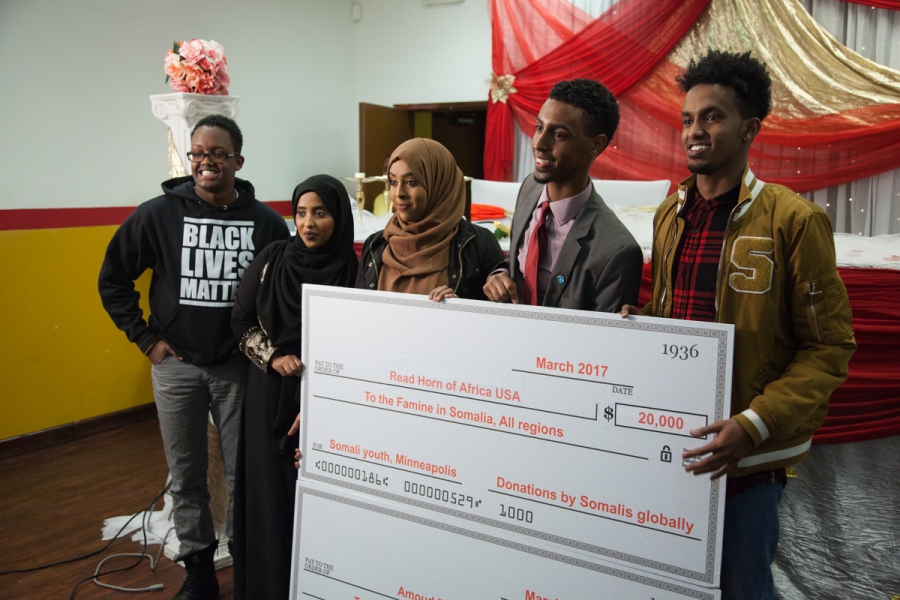 Kali Mohamed, Hafsa Jibril, Nadira Mohamed and Liban Adam (left to right) hold up a giant check for Read Horn of Africa USA, one of three organizations for which they raised money. The other two organizations are Amoud Foundation and CaaliWalaal, which means "Help Your Brother" in Somali.

Even so, Adam and Mohamed say critics accuse them of trying to help regions of the country according to their tribal affiliations. It’s a charge that the duo bristle at, but are not surprised by. They point out that they are still full-time students, not billionaire philanthropists. Adam says he and Mohamed are doing whatever is in their capacity to ensure the most high-risk regions are prioritized.

They are also trying be transparent, and showing how they spend the money on a dedicated Facebook page called Somalia Forward.

"These days no one can hide the truth, because the internet is very transparent, everyone has a ... cell phone, can record what's going on, if something is happening, is not happening," says Adam.

That Somalia has managed to develop a modern telecommunications sector allows the team to give donors a direct window into how their money is being spent.

“You have to be more specific on how the money will be spent, give them as much details as they request or want, in order for you to gain their trust," says Mohamed.

Less than three days after the team transferred money, the Amoud Foundation had purchased and begun distributing food and water, and sent images to show the donors. In this way, social media has restored some faith in relief efforts and given the foundation a second wind, this time from the Somali people themselves.

Linda Polman, author of “The Crisis Caravan” and an outspoken critic of the aid industry, says such grassroots efforts are unlikely to affect change compared to United Nations-supported efforts, which she points out are themselves chronically underfunded.

“It's not like those projects can actually solve famine, for example ... but it will make people feel better,” says Polman. But she admits that "it’s very important to feel that you are actually in charge of your own future, or at least in charge of part of your future.”

And like many in the Somali diaspora, Adam and Egal want that kind of empowerment.