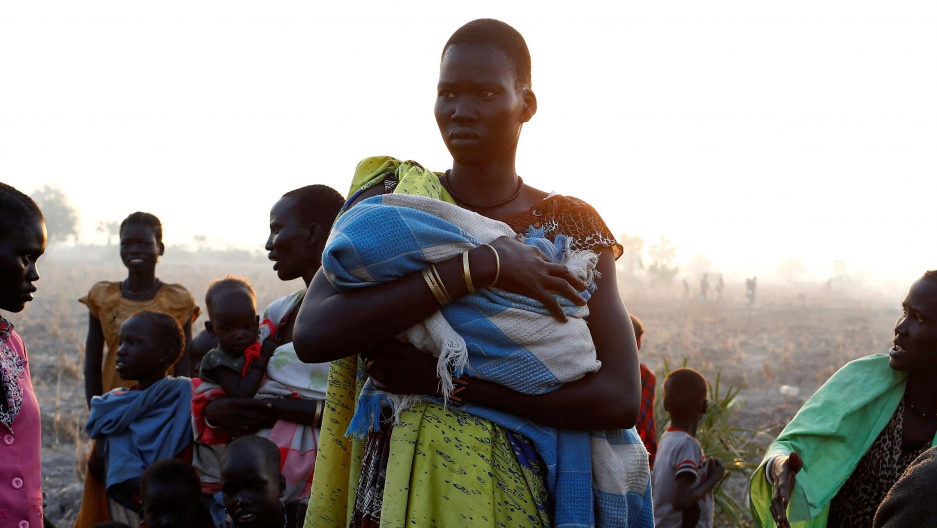 A woman waits to be registered prior to a food distribution by the United Nations World Food Programme (WFP) in Thonyor, Leer state, South Sudan.

The United Nations announced this month that more than 20 million people in four countries are teetering on the edge of famine, calling the situation “the worst humanitarian crisis” since the end of World War II.

The key for avoiding the worst outcomes? Political will, experts say.

Modern famines are different from those the world faced 60 to 70 years ago. In the past, with less warning and less international support, more people died from hunger. In the early and mid-20th century, famines killed millions in Europe and Asia, in areas with much larger populations than areas which suffer from food insecurity today.

According to estimates from the World Peace Foundation, the deadliest famine in recorded history actually did take place after World War II. During China’s Great Leap Forward, about 30 million people died from hunger between 1958 and 1962.

What explains the UN's statement, then? They may be counting famines by decade, which would have split the Great Leap Forward crisis between the 1950s and the 1960s:

These days, famines cause death by the thousands, and are mostly confined to the Horn of Africa. Improvements in transportation and communications infrastructure have been successful in eliminating large-scale famines in virtually all other parts of the world.

But the current situations in Somalia, Yemen, Nigeria and South Sudan are undeniably harsh.

“Those people will suffer, their children will be malnourished, they will likely be displaced, lose their livelihoods, and some people will no doubt die as a result of this crisis,” says Dan Maxwell, a food security professor and director of the Feinstein International Center at Tufts University.

Maxwell exphasizes that modern-day famines are rarely caused by a lack of food. “There has never been a case that agricultural production causes famine alone,” he says. “It only causes a famine if someone lets it cause a famine.”

And that's where data become especially important. Measuring early indicators is crucial for averting famine, as is early investment. In its March announcement, the UN asked for $4.4 billion in emergency funding for intervention, and released $22 million in an emergency loan to Somalia on March 21.

“If we get to the point where a famine is declared, it’s essentially indicating a failure on the part of the international community,” explains Chris Hillbruner of the Famine Early Warning Systems Network, or FEWS NET.

So, how do we measure the warning signs?

FEWS NET uses the Integrated Food Security Phase Classification (IPC) 5-point rating system, which rates areas around the world to signal how serious food insecurity is there. The ratings go from "minimal" to "stressed, crisis, emergency and famine."

The scale, developed in 2006 and updated in 2012, is in use in 25 countries and gives a consistent measure for food insecurity.

“There should be a response at phase 3 and phase 4,” Hillbruner said. “Phase 4 is where people start dying because of food insecurity. If one waits until famine and then starts responding, inevitably it will be too late.”

Watch severe food insecurity in Africa and Yemen develop from 2015 through FEWS NET projections into July 2017. Famine information for Yemen is not yet available for February 2017 and 2017 projections. (Source: FEWS NET)

To declare a famine, at least 20 percent of households surveyed in an area must face lack of food, and more than 30 percent of children in an area have to have a weight that is recorded as dangerously low. If you don’t have data that says that, you can’t declare famine even if people are starving.

The situation in Yemen is the largest food insecurity emergency in the world right now, according to FEWS NET. Seven governorates there are classified as phase 4. An estimated 17 million people, or 60 percent of the population, are food insecure.

In South Sudan, about 4.9 million are estimated to be food insecure and that number will climb to 5.5 million by July. Five counties are classified at 4 and 5 and will worsen.

FEWS NET officials struggle to access parts of Nigeria, and reported in December that a famine likely occurred in Bama and Banki towns and the surrounding rural areas in 2016.

Hunger is a political issue

Maxwell says there’s a common misconception among the public that overpopulation and lack of resources are the main drivers behind food insecurity. (It’s a theory that was put forth by Thomas Malthus nearly two centuries ago.) In other words, that people starve because there's not enough food.

But Emily Farr, Emergency Food Security and Vulnerable Livelihoods team leader at Oxfam, says that's not the underlying problem. “We are talking about situations that are caused by human behavior,” she says.

The Horn of Africa region, where hunger is worst, is also prone to drought — but the impacts of climate change alone are not enough to create famine, experts say, so long as they are managed.

Farr emphasizes that fast-acting humanitarian response is important for mitigating famines, although the data can be hard to come by.

“There have been cases in the past where we haven’t been able to declare food insecurity as much as it was because we simply didn’t have the data,” Farr says.

Conflict especially can limit access. In South Sudan, for example, violence has claimed the lives of at least 12 aid workers this year and as many as 79 since 2013.

Fundamentally, Hillbruner of FEWS NET describes famine as a humanitarian and political issue.

“I think there are times when it’s overstated that there are places we can’t get any information,” he said. “But when the political will is there, everyone suddenly has access.”

Clarification: This story has been updated to reflect the difference between populations in famine (IPC stage 4) and those facing severe food insecurity (IPC phases 2 and 3).