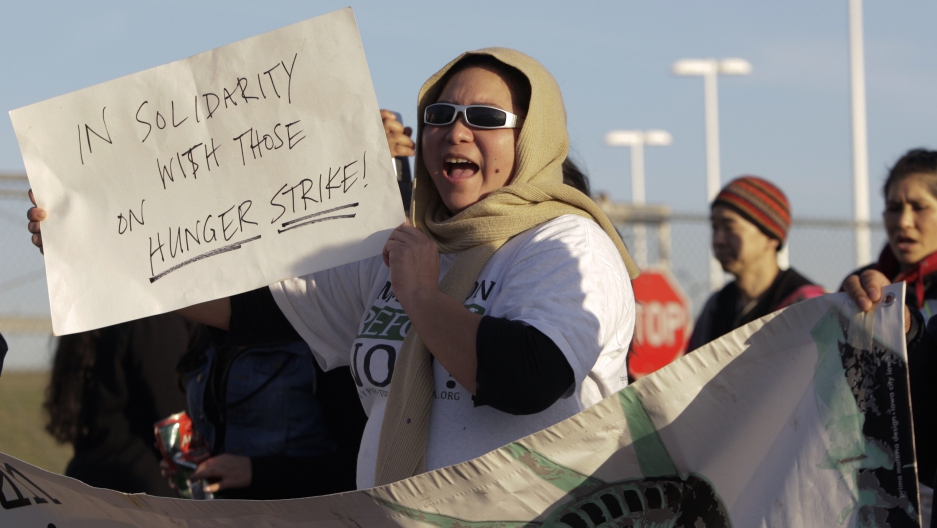 Immigrants’ rights supporters rally outside the Northwest Detention Center in Tacoma, Washington, on March 11, 2014. Over the years, immigrant detainees and their supporters have used hunger strikes to demand reform at this facility, owned by the private prison company GEO Group. A hunger strike and protests have been on and off since April 10, 2017.

The Trump administration has been a huge windfall for the private prison industry. Two of the largest companies have seen their stock price more than double since Trump’s election in November.

But private detention centers are also taking a hit in the courts and in the media.

GEO Group, one of the largest operators of prisons and detention centers in the country, is the target of a class action lawsuit at one facility and a hunger strike at another. Meanwhile, a civil rights complaint filed against the Department of Homeland Security (DHS) last week alleges an increase in abuse in immigration detention, and lists Geo Group and CoreCivic (previously called the Corrections Corporation of America) among the worst offenders.

Of more than 70 ongoing lawsuits against GEO Group, one has become a class action covering tens of thousands of current and former detainees. It accuses GEO Group of both “unjust enrichment” and forced labor at its Aurora, Colorado, facility, where some detainees work for $1 a day and many more for nothing, under threat of solitary confinement. The lawsuit seeks undisclosed millions of dollars and changes in the work policy at that facility.

GEO Group says it is in compliance with national standards and is appealing a judge’s decision in February to certify the suit as a class action.

GEO Group also operates the Northwest Detention Center In Tacoma, Washington, where inmates are holding a hunger strike while supporters demonstrate outside. The action stems from complaints about poor-quality cafeteria food, smelly uniforms, poor medical care, high commissary prices and delayed court proceedings, among other issues. It’s one of several hunger strikes at this facility in recent years.

Maru Mora Villalpando, a spokesperson for the striking detainees, says none of the past strikes have changed detention conditions in any lasting way, but they have increased public awareness.

Meanwhile, DHS is on the defensive after the national nonprofit Community Initiatives for Visiting Immigrants in Confinement (CIVIC), which has visitation programs in 43 facilities, filed a complaint last week. CIVIC co-director Christina Fialho says its network was hearing an increasing number of accounts of sexual abuse in facilities, so the group requested government data about the complaints they received. CIVIC found that 33,126 complaints of physical and sexual abuse were filed with the DHS Office of the Inspector General from January 2010 to July 2016, and that the OIG investigated less than 1 percent of those complaints, referring the vast majority back to the agencies from which the complaints arose — which Fialho says is a conflict of interest. The OIG data also shows an increase in sexual abuse allegations since 2010. (PDF).

Gillian Christensen, a spokesperson for DHS, said in a statement that the complaint was “grossly inaccurate.” She said there were 2 million admissions to ICE [Immigration and Customs Enforcement] facilities in the six-year period the complaint covers and, “given the volume of individuals who annually pass through its detention system, the agency believes the overall incidence of such activity is very low.”

Also: Private prisons aren’t the only companies making a fortune off immigration detention

In 2009, President Barack Obama announced that conditions in immigration detention would change. He said detained immigrants would be treated less like criminals in a “truly civil detention system.” A new Office of Detention Policy and Planning would review and improve standards of facility management and medical care.

So what happened? Why did reports of abuse increase in the years that followed?

“Unfortunately, a lot of those reforms did not lead to strong outcomes,” says Grace Meng, who investigates abuse in detention for Human Rights Watch. She says that problems in the detention system were identified, “but the mechanisms for ensuring policies be fixed were not there.”

What’s more, while reforms in the system were being implemented, the system was dramatically expanding. Meng says it’s hard to hold facility operators accountable when there is pressure to hold so many detainees.

“Until there’s a real willingness to reduce the detention population,” she says, “I don’t think that reform efforts can have real teeth.” 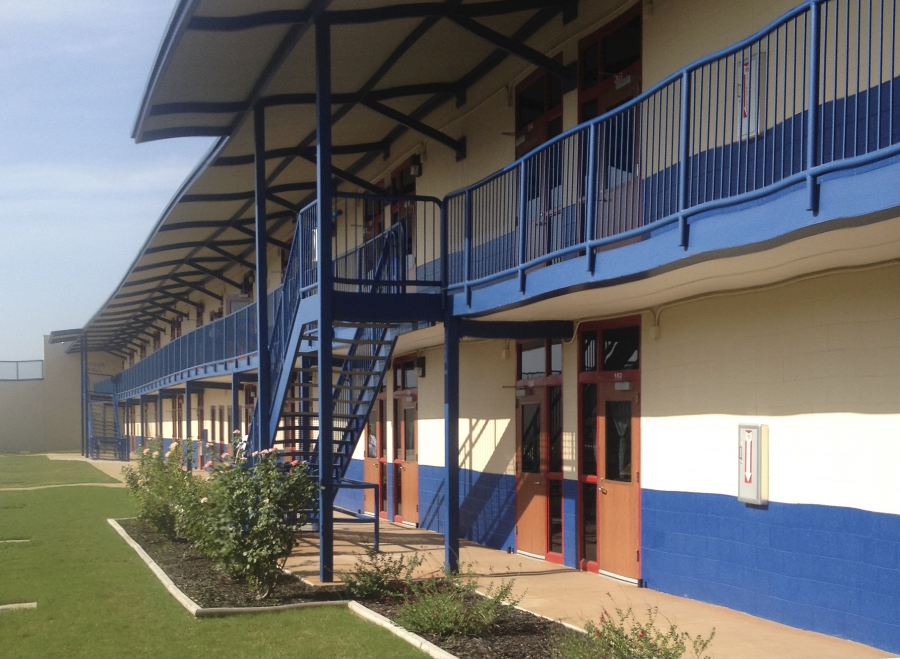 An exterior photo shows a privately operated US government detention facility in rural Karnes County, about 60 miles southeast of San Antonio, Texas, July 31, 2014. It has been operated by GEO Group since 2010.

Much of that detention expansion during Obama’s term was in private facilities, even though the Justice Department eventually decided to phase out use of private companies to run prisons. A review by the Department of Justice inspector general released last August found that private prisons, which hold 12 percent of about 200,000 federal inmates, have more "safety and security incidents per capita" than those operated by the Federal Bureau of Prisons (PDF).

The Trump administration announced in February that it has reversed Obama's decision and will maintain contracts with private prison companies.

By 2015, about 72 percent of more than 325,000 immigrant detainees were held in facilities run by many of the same private prison companies that run federal prisons, according to data obtained by TRAC, the Transactional Records Access Clearinghouse at Syracuse University.

More about abuse in private immigration detention, and a question for the Trump administration.

The CIVIC civil rights complaint lists facilities by the number of reports immigration agents received of physical or sexual abuse of detainees. The five facilities with the most complaints were run by either GEO Group or CoreCivic.

Fialho says she wasn’t surprised. These companies, she says, are required to maximize profits to shareholders. “If that is what they’re required to do by law, and there’s no laws regulating them,” she says, “then they’re not going to be operating in a way that actually ensures that people are being treated humanely.”

Private facilities, she says, are not subject to the disclosure requirements of the Freedom of Information Act and many state public records acts, so the public is less able to see what goes on behind the walls of their facilities.

Government-run jails that hold immigrants facing deportation are required to conform to a long list of standards. However, according to documents obtained by the New York Times, as the Trump administration plans to open up more jail beds to immigrants, it is also set to roll back many of those regulations, including those governing solitary confinement, translation services, medical care and the treatment of suicidal detainees.

So, are for-profit detention centers going down? Far from it.

Last week, GEO Group announced it had won an ICE contract to build a 1,000-bed detention center near Houston, which, the company says in a statement, “is expected to generate approximately $44 million in annualized revenues and returns on investment.”

“Even with Trump’s announced plans to increase detention and erode detention standards,” she says, “he still can’t literally get enough detention beds without more money from Congress… so I think there is room for pressure from the public, to push their representatives in Congress, and say, ‘No.’”