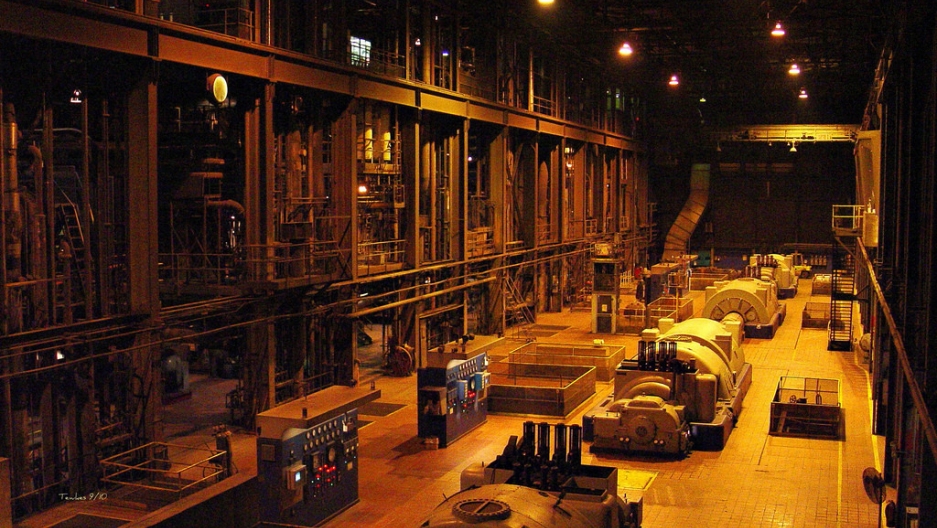 This is a photo from inside the coal-fired Richard H. Gorsuch Generating Station in Marietta, Ohio. The plant was closed later that year to resolve violations of the federal Clean Air Act.

If President Donald Trump has his way, the Environmental Protection Agency will be downsized quite a bit: 31 percent, with more than 50 programs eliminated, as laid out in his budget proposal released on Thursday. But penny-pinching isn’t the only tool his administration and Republican lawmakers have at their disposal, to undermine the agency.

As two environmental law experts explain, different congressional actions and executive orders can also be used to chip away at the EPA. Some already have.

The president can't do away with the EPA altogether because “there are a bunch of statutes on the books that require EPA to do things: to issue regulations, to enforce laws, to clean up hazardous waste sites and so forth,” says Ann Carlson, a professor of environmental law at the University of California, Los Angeles. “So, I think what they're basically trying to do is kill EPA through a thousand cuts, as opposed to actually abolishing it outright.”

Related: It's starting to look like 'Home Alone' at the State Department

In February, Congress invoked the rarely used Congressional Review Act to reverse a rule finalized under President Barack Obama late last year: the Stream Protection Rule, which kept the coal-mining industry from dumping waste into nearby waterways. Another repeal, of the Methane and Natural Gas Waste Prevention Rule requiring energy companies to reduce methane emissions from fracking, is awaiting Senate approval. Under the act, which allows Congress to roll back federal regulations within 60 legislative days, the rescinded rules can’t be adopted again.

House Republicans have also introduced the REINS Act (short for Regulations from the Executive in Need of Scrutiny), which would require the House and Senate to vote on any new regulation costing more than $100 million. The proposal isn’t limited to the EPA, but Carlson says it would affect “essentially any major environmental regulation,” including in future administrations.

“I mean, just to give you one example, a rule that protects the population from mercury emitted from coal-fired power plants has costs of about $9 billion,” she says. “But it also has benefits in the tens of billions of dollars from the protection of public health.”

“We expect that [the executive order] will say not just that EPA should repeal the existing rule, but also that it shouldn't even offer up a new rule to take its place,” says Michael Burger, executive director of the Sabin Center for Climate Change Law at Columbia University, adding, “And that's fundamentally different than saying, 'We're going to repeal this rule, look at the policy preferences and choices that went into it and come up with something new,' that … would be maybe weaker.”

President Trump’s proposed budget also calls for the elimination of approximately 3,200 positions at the EPA. Carlson says that if the budget passes, “there's going to be essentially no one left to administer the laws, to clean up the environmental messes that still remain, and to figure out how to move forward and continue to make environmental progress and clean the air, clean the water, and protecting the planet from higher temperatures.”

And that’s to say nothing of the programs supported by the EPA. “These cuts are so draconian that we'd see the essential elimination of all kinds of programs that do things like clean the Chesapeake Bay, clean the Great Lakes, remove or clean up diesel vehicles which emit cancer-causing particulate matter,” she says.

But for now, President Trump’s budget is still just a proposal — and Burger senses that its cuts across numerous agencies could prove unpopular. For example, the administration wants to cut all funding for floodplain mapping, he says, which helps the Federal Emergency Management Agency forecast who’s at risk of flooding from storms and rising sea levels.

“They also want to cut funding for disaster planning and for disaster recovery,” he adds. “Now, you know, when we think about climate change, we often think about reducing greenhouse gas emissions. But climate impacts are happening now.”

The Sabin Center has built a “Climate Deregulation Tracker” that follows the federal government’s movements on climate policy. Burger suggests that concerned citizens use the information they find there to engage directly with administrative agencies — like the EPA.

Related: Trump budget cements pivot away from US climate leadership

“When the agency pulls back on a final rule, they don't get to just say we're done with it,” he says. “They actually have to go through a regulatory process which involves providing public notice and allowing for public comment.”

And there’s work that can be done at the state level, Carlson adds. “A number of states are doing really innovative things in the clean energy sector, including not just the blue states but red states,” she says. “So get your state legislators to support renewable energy, other clean energy moves and also support environmental organizations — those nongovernmental organizations that actually can keep track of a lot of the regulation.”

Getting the public engaged is “a bright spot here,” she says. “I think people do care about the environment and they need to express how much they care about it.”

“And you know what? Congress listens to that.”