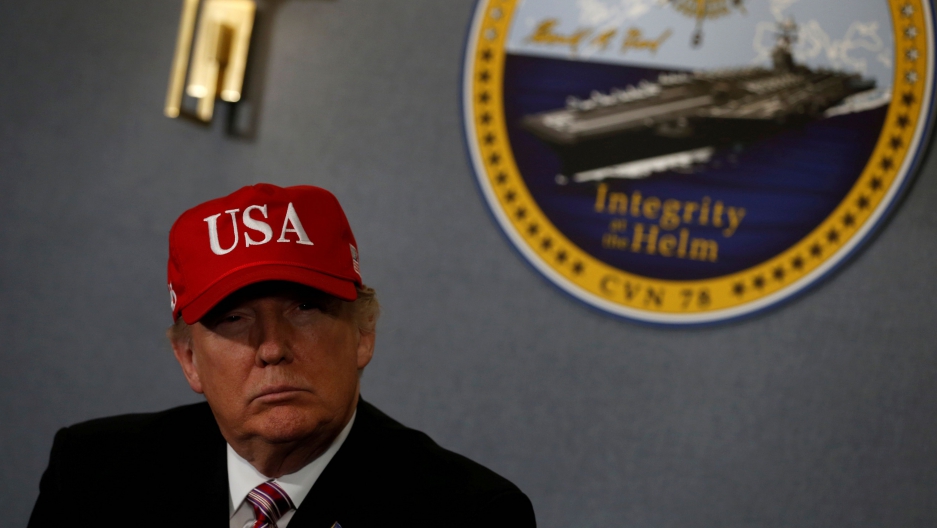 President Donald Trump proposed drastic cuts in spending on the arts, science, foreign aid and environmental protection Thursday, in a security-focused budget blueprint that could struggle to pass Congress.

Trump, in the preface to the spending proposal, described it as "a budget that puts America first," and that makes safety and security the "number one priority — because without safety, there can be no prosperity."

The State Department and the Environmental Protection Agency would be the biggest losers, seeing their funding reduced by around one-third.

Defense would be the biggest winner, with a $52 billion increase that amounts to more than three times Canada's total military expenditures in 2015. Trump's budget, if passed, would reverse an eight-year downward trend in military spending under Barack Obama.

The $639 billion defense budget consists of a base budget of $574 billion, and another $64.6 billion in war-fighting funds known as the Overseas Contingency Operations budget. We'll include this emergency funding in the comparison because the Pentagon has been using it for regular items.

In addition to the $52 billion increase for the Pentagon, Trump added another $2 billion to other national defense programs outside of the department.

The amount is a significant increase from the $603 billion defense budget that Trump suggested earlier. Sen. John McCain, who is chair of the Senate Armed Services Committee, criticized that first proposal and counter-proposed a defense budget of $640 billion.

A 10 percent increase may seem small, but for the world’s largest defense spender, it is an enormous amount of money. 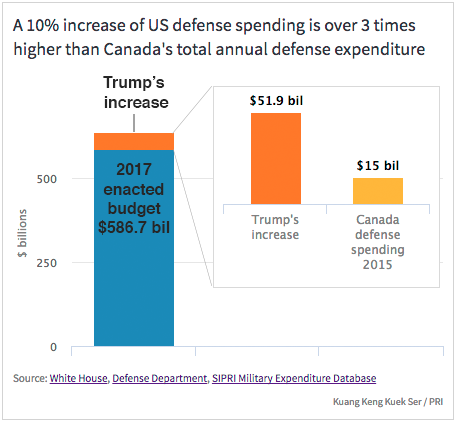 Trump's proposal is set to change the downward trend of the US defense spending started by his predecessor.

If we look at US defense expenditures as a percentage of gross domestic product — a better way to measure a country's spending priorities because it lets us compare big countries and small counties — the number fell steadily during Obama's administration, from 4.66 percent in 2010 to 3.17 percent in 2016.

Defense spending saw a long-term decline after the end of the Cold War in 1992. This downward trend stopped in 2001 after 9/11, and subsequent US invasions of Afghanistan in 2001 and Iraq in 2003 pushed up defense spending until Obama took office in 2009. The budget sequestration that has been implemented since 2013 also slashed defense spending.

If we look at the world's top six military spenders, the defense expenditures of Russia and China have seen steady growth for more than a decade while France and the UK, both US allies, have been cutting military spending since the 2008 financial crisis.

Another US ally, Saudi Arabia, has quadrupled its military spending over the past two decades.

However, the US still dwarfs the rest of the world when it comes to defense spending. Its outlay is higher than the next five top spenders combined.

That's partly because the US has a much higher GDP. If we compare defense spending in these countries based on the percentage of GDP, for example, Saudi Arabia spends substantially more than all other countries.