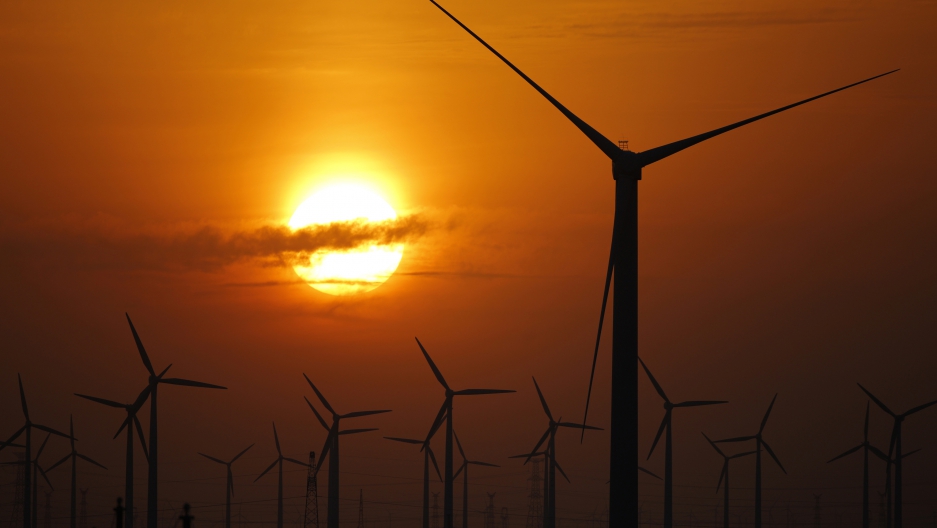 Wind turbines used to generate electricity are seen at a wind farm in Guazhou, Gansu Province, China, in 2013. China has signaled that it wants to take over leadership of international climate change action as the US steps away from that role.

President Donald Trump’s proposed budget marks a sweeping shift in domestic environmental policy and a decisive sign that US international leadership on climate change has ended.

The first draft of a 2018 budget, released by the White House on Thursday, would cancel funding for climate change research and United Nations climate programs. It would also chop funds for enforcing the Clean Power Plan, a rule that would have cut emissions from the electricity sector.

Both the UN funding and the Clean Power Plan — key measures from President Barack Obama's administration — are crucial to meet commitments the US made at the 2015 UN climate summit in Paris.

Large cuts to the Environmental Protection Agency and State Department laid out in the budget free up some of the funds for a $52 billion defense spending increase.

“A budget that puts America first must make the safety of our people its number one priority — because without safety, there can be no prosperity,'' President Trump said in a message accompanying his proposed budget.

A section of the 2018 draft federal budget outline for the EPA.

Congress has the final say over budgets, and White House Budget Director Mick Mulvaney acknowledged to reporters that passing the cuts could be an uphill struggle.

He said the administration would negotiate over replacement cuts.

“This is not a take-it-or-leave-it budget,” Mulvaney said.

Still, the budget is important in signaling White House priorities and its message on climate change is clear.

Backing away from world climate leadership

US leadership was key in winning a hard-fought 2015 international agreement in Paris to cut climate-warming greenhouse gases worldwide.

China and the European Union both said after President Trump’s election that they would step in to fill a climate leadership void during international climate negotiations. But the US backing away from the UN process may lead countries that came reluctantly to the Paris deal to question their own commitments.

“There are many other countries out there where they were quite divided,” says Andrew Light, a former State Department climate change negotiator in the Obama administration.

“There are folks still in those countries who think that they went too far out on a limb in joining the Paris climate agreement, and so these kinds of signals could reopen the debates in those countries about whether or not they’re still committed to this process.”

The US has also committed to pay billions of dollars into a UN fund for developing countries. The president’s budget would cease those payments, as well as funding for the Global Climate Change Initiative, an umbrella plan that funds dozens of international programs to help foreign countries develop sustainably and bolster defenses against climate change.

“This completely undercuts our influence,” says Light, who is now a senior fellow at the World Resources Institute and a professor at George Mason University.

Climate change is not just a diplomatic concern, but a national security one, as well.

Drought, famine and rising seas contribute to instability that can trigger or exacerbate conflict.

Unlike some in the Trump administration, Secretary of Defense Jim Mattis is on record stating that he believes climate change is real and a threat to international security.

"Climate change is impacting stability in areas of the world where our troops are operating today," Mattis reportedly wrote in testimony to senators after his January confirmation hearing.

"The effects of a changing climate — such as increased maritime access to the Arctic, rising sea levels, desertification, among others — impact our security situation," Mattis added.

It’s unclear if, or how, environmental cuts might impact the Defense Department’s capacity for forward planning when it comes to climate change.

Andrew Light argues the changes will undercut US security.

“It basically eliminates the support we were giving to other countries, especially in unsecure parts of the world, to respond to climate change,” Light says.

US scientists produce much of the world’s science on climate change, and government agencies including the National Oceanic and Atmospheric Administration, NASA and the EPA monitor and collect data that climate researchers all over the world use.

“When that goes away, we’re really undermining the global effort to respond to this problem,” Light says.

The EPA budget cuts are expected to cost 3,200 jobs at the agency.