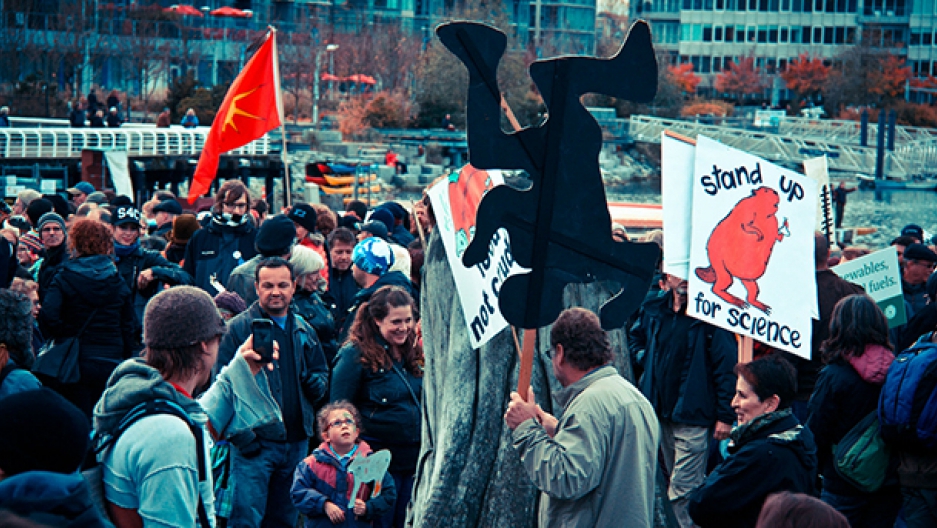 Beginning with the "Death of Evidence" march on Ottawa in 2012, the Canadian science advocacy group, Evidence for Democracy, organized a series of “Stand up for Science” rallies to protest Stephen Harper’s silencing of federal scientists.

When President Donald Trump came into office in January, staff at several government agencies were told not to send out news releases or to communicate by social media, and most mentions of climate change disappeared from government websites.

Changing the message on issues that could affect policy is standard procedure with a change of administration, but many saw this as censorship of government scientists — akin to moves taken in Canada under former Prime Minister Stephen Harper.

Simon Fraser University biologist Wendy Palen, who witnessed the suppression of science under Harper, has some advice for her American colleagues.

“The lessons we learned in Canada are very relevant to the United States right now, and there are a couple of key messages that I would have for scientists in the US,” Palen says. “One is that you need to find ways to document the abuses or cases where there's unethical behavior happening within agencies, or scientists being individually censored or told that they need to change something in a report, or that they can't speak to the media.”

“The broader message is about coming together as a scientific community,” she adds. “Those of us who are in relatively safe and protected positions [in academia] need to really stand up for our colleagues [in government] who are more vulnerable. Right now, I think those are the colleagues in federal agencies like the Environmental Protection Agency or the Department of Energy.”

Palen has studied the impact of oil spills on water, so she was in the crosshairs when Prime Minister Harper — who aimed to pin Canada's prosperity to fossil fuels — first began censoring federal scientists. Fortunately, she says, as an academic scientist, she “was protected in a way that most federal scientists are not from political influence.”

Around the same time that government scientists were being censored, a budget bill was passed that cut funding to many different research institutions, as well as to the locations where the work was being done — research stations in the high Arctic, for example, and a place called the Experimental Lakes Area, which Palen calls “the marquee example of where the government works with scientists to understand how contaminants and environmental pollution interacts in our ecosystem and what the human health consequences are of those kinds of pollutants.”

“The kinds of facilities that were being closed or whose budgets were slashed were the kinds of organizations that were documenting changes in our environment — from atmospheric changes to water quality changes for human health to environmental and biodiversity changes,” she says.

During this period, there was an 80 percent decline in the research having to do with climate change, Palen says, “at least in terms of how it was communicated and published from those agencies after these rules came into play. So, it had what we would call a chilling effect on our ability to study these problems with the environment, as well as our ability to communicate about them.”

In 2012, Canadian scientists came together to stage what was called the "Death Of Evidence" rally, in which they held a mock funeral on the stairs of parliament in Ottawa. “Scientists came out and marched as a funeral procession, holding up signs about the death of evidence and the way in which scientists were being censored and muzzled,” Palen says.

Prime Minister Justin Trudeau may also favor controversial fossil fuel plans, like the Keystone pipeline, but he has drastically changed the tone toward scientists since taking over in November 2015.

“What I notice is that there is a lot of vocal support for the role of science and evidence in decision-making,” Palen says. “I think that there's a lot of genuine interest in protecting scientists as a group of people who are tasked with expanding our knowledge. Science by itself is completely apolitical. Facts are apolitical. So recognition by government is a very important thing, and that serves to reassure those of us in [the] scientific community.”