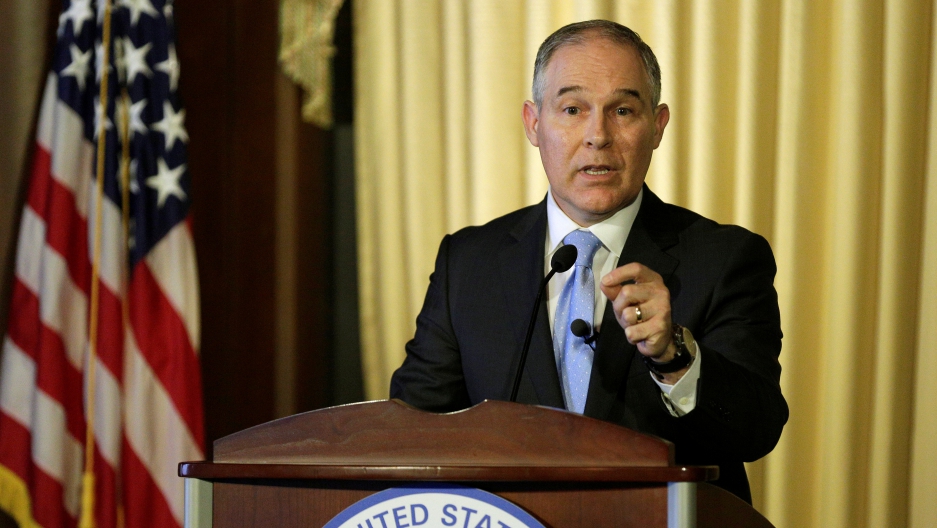 New US EPA administrator Scott Pruitt says the the jury is still out on the role of CO2 pollution in causing climate change. Long-established science says that's just plain wrong.

Not long ago, this would’ve been a remarkable statement from the head of the US Environmental Protection Agency:

“There's tremendous disagreement about the degree of impact [of carbon dioxide], so I would not agree that it's a primary contributor to … global warming.”

But those were indeed the words of new EPA administrator Scott Pruitt, speaking Thursday on the CNBC show Squawk Box.

Pruitt’s statement is roughly the scientific equivalent of saying he doesn't believe that gravity is a primary contributor to making things fall. Although by itself, it was no big surprise — his record of denying the reality and significance of human-induced climate change has been well known since his days battling federal environmental regulations as Oklahoma’s attorney general. His boss, President Donald Trump, too has often dismissed climate change as a hoax.

But Pruitt’s statement this past week matters hugely, because he and Trump are now positioned to reverse the US government’s efforts to combat the global climate crisis, with the first specific plans expected in an executive order from the president in the coming week.

In other words, Pruitt’s comments are not exactly news, but they are important to report, as well as to put in context — to remind ourselves what we know about CO2 and the Earth’s climate, and how we know it.

For that we got in touch with Barry Bickmore, a professor of geosciences at Brigham Young University in Provo, Utah, and, it’s worth noting, a Republican.

“The first thing we know,” Bickmore says, “is that carbon dioxide is a greenhouse gas, which slows down the rate heat can escape from the Earth to space.

We can also measure how much the concentration of CO2 in the atmosphere has increased, Bickmore says, and correlate that with changes in the global temperature.

Doing that shows that the two are closely linked — as CO2 levels have gone up, temperatures have gone up. Basic physics predict this would happen; careful and widespread real-world data confirms that it has.

That's not to say the progression has been in lockstep. CO2 is only one of many greenhouse gases in the atmosphere, and nature also plays a role in changing the levels of those gases along with human activity.

“It’s a complicated system,” Bickmore says, “so pinning things like that exactly [is] not going to be possible all the time.”

Pruitt and others who reject the well-established science of the climate system point to this complexity and uncertainty to suggest that we can’t draw any conclusions about the role of increased CO2 levels in altering the Earth’s climate.

Bickmore says such claims are “disingenuous.”

We can establish a range of probable impacts, he says, “and the probability that humans are contributing less than half to the recent climate change is probably less than 1 percent.”

In other words, there’s a more than 99 percent likelihood that the CO2 humans have put into the atmosphere is responsible for at least half of the planet’s recent warming.

This basic understanding of the link between CO2 and climate change is almost universally accepted by scientists in the field.

So, Bickmore says, Pruitt’s assertions that there is “tremendous disagreement” about the impact of CO2, and that it's not a primary contributor to global warming, are “absolutely wrong.”

This, in a nutshell, is what we know about CO2 and climate.

As for how we know it — which is important to establish at a time when basic scientific knowledge is being challenged from all sides — the conclusions are supported by what scientists call “multiple lines of evidence.”

Among these, Bickmore says, are thermometers in place around the world — in some cases establishing a surface temperature record going back more than 150 years; buoys that measure ocean temperatures; and satellites that estimate changes in atmospheric temperatures.

“We can also go and look at past changes in the climate,” Bickmore says, through things like ocean and lakebed sediments and glacial ice, which can contain traces of atmospheric gases and other clues to ancient climates going back millennia.

Scientists have even been able to learn how much solar radiation — heat — the sun was producing in past epochs, and account for how that would’ve affected the global climate.

“So we can pin down the major players way back into the past, too,” Bickmore says. “And it’s really clear that carbon dioxide isn’t the only player in the game, but it’s always been one of the big ones.”

Bickmore himself didn’t always accept all this evidence. Although he’s a geoscientist, climate systems aren’t his primary field of study. And he says he brought an inherent skepticism to the field.

“I’m a lifelong Republican, and conservatives generally — our knee-jerk reaction to a thing like this is, ‘oh, they’re probably overblowing this,’” he says.

“But once I started looking into it, what I found out was, there was a lot of evidence piled up on one side, and basically a lot of hot air on the other — some really, really bad arguments,” Bickmore says.

“Whenever I checked, I found out that the critics of the mainstream science were almost always being really disingenuous. That’s probably the most polite way to say it.”

So Bickmore’s personal beliefs and values colored his initial engagement with the topic of climate change, but not his ultimate conclusions. The science spoke for itself.

Which sets him apart from Scott Pruitt and most of his fellow conservatives in a time when acceptance of the reality of climate change and the role of humans in causing it skews sharply along ideological and party lines.

Bickmore says he’s seen this trend developing since at least the 1980s, when the Republican Party began allying itself more with conservative Christians who reject much of our modern scientific understanding of the world. He says it also stems from the same philosophical position that prompted his initial skepticism of the dangers of the human impact on the climate system.

“The knee-jerk reaction of a conservative will always be to downplay problems like this,” Bickmore says,” because if your ideology is that you should try a more hands-off approach to governing, then a problem like this, that requires a lot of cooperation to address, is going to be really inconvenient for that ideology.

“But it’s gotten to the point where people, just out of hand, instead of saying, ‘we don’t need to do as much as these other people are saying to solve the problem,’ they’re saying ‘there is no problem.’”

But, he says, fellow conservatives like Pruitt and Trump “are taking a terrible, terrible risk by just pretending there is no problem” with climate change.