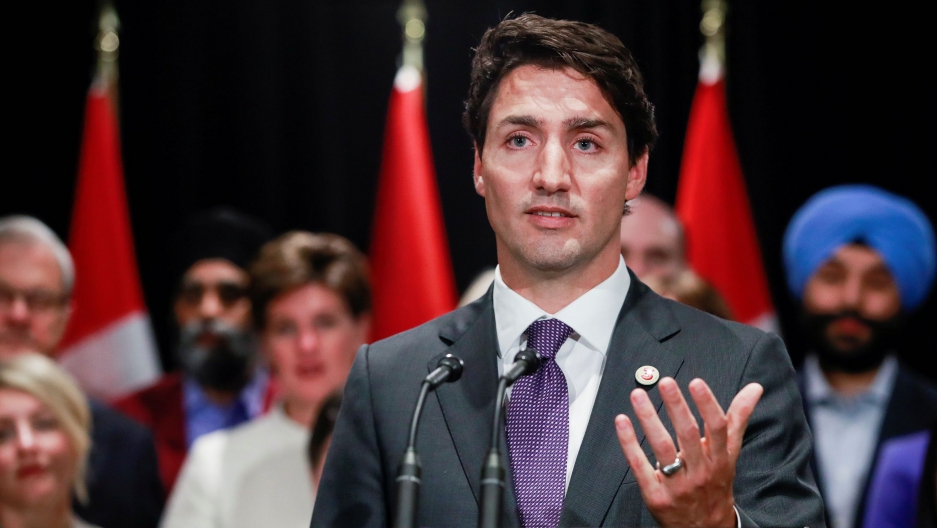 Canada's Prime Minister Justin Trudeau speaks to the media at the end of a two-day Cabinet retreat in Calgary on Jan. 24, 2017.

Trump gave a conditional go-ahead to the Keystone XL pipeline — which would carry oil from Canadian tar sands to US refineries on the Gulf Coast — and an equally controversial pipeline crossing in North Dakota.

Both had been put on hold by Obama's administration.

True to his claim to be a hard-charging dealmaker, Trump said both pipeline projects would only be built subject to renegotiated terms and conditions.

"We are going to renegotiate some of the terms and, if they like, we'll see if we can get that pipeline built," he said.

Since being sworn in on Friday, Trump has begun rolling out an orthodox Republican agenda.

He has moved to curb funding for abortions, embraced Israel, frozen government hiring and sought to loosen environmental regulations.

His administration has also sought to place a tighter grip on departments that may not be sympathetic to his politics.

On day one, Trump's Interior Department ordered staff to report any correspondence from Congress, governors, environmental groups or industry organizations, according to an internal memo obtained by AFP.

Certain meetings, regulations and environmental notices are also to be reported to the department's executive secretariat.

"No correspondence should be cleared to go to Congress or to any Governor until it has been reviewed by the Acting Chief of Staff and/or Senior White House Advisor," the document states.

Trump has sought to put his nationalist and populist print on policy, especially on the economy and trade.

The freshly minted president indicated that one possible focus of renegotiation for the revived pipeline projects could be who makes the actual piping.

In a separate executive order issued Tuesday, Trump decreed that pipes should be American made — echoing his "America First" doctrine.

"We want to build the pipe, put a lot of steel workers back to work."

Most, although not all, oil pipelines are buried underground and made of carbon steel.

Obama had rejected a permit from Calgary-based firm TransCanada to build the 1,179-mile Alberta-Nebraska section of the project.

Environmentalists have assailed the project, arguing that the Alberta deposits produce some of the "dirtiest" crude in the world.

Protesters massed outside the White House late Tuesday to vent their frustration.

"We're showing up at his home, at Trump's home, to say, 'We're going to come, we're going to continue to show up at your space, in your spaces and share our message and demand that you see us, that you hear us.'"

Canada's Prime Minister Justin Trudeau has helped lead the international charge against climate warming, but his government has firmly supported the pipeline, seeing it as a means of boosting business.

The project will also mean less oil being transported by rail.

The Dakota Access Pipeline is more of a political hot potato in the United States.

Native Americans and their supporters strongly protested against the project, prompting the US Army Corps of Engineers — which has approval authority — to nix the plans under the Obama administration.

Thousands of protesters had camped in freezing winter temperatures to block the pipeline's planned route which the Standing Rock Sioux Tribe says creates a risk of water pollution and endangers areas with sacred historic artifacts.

The standoff — which included some 2,000 military veterans who joined the protest — set off violent clashes with law enforcement as well as sympathetic demonstrations nationwide.

But Trump has supported the 1,172-mile oil pipeline, which would snake through four US states.

"We are not opposed to energy independence. We are opposed to reckless and politically motivated development projects ... that ignore our treaty rights and risk our water," said Dave Archambault, chairman of the group.

The sheriff of Morton County, North Dakota, where the main protest camp is located, issued a statement urging protesters to remain "peaceful and lawful" in their actions, and saying he intended to ask the Trump administration for law enforcement backup.