A protester uses his sandal to beat a picture of Egypt's then-President Mohammed Morsi in Tahrir square in Cairo on June 28, 2013.
Credit:
Asmaa Waguih/Reuters
Share

Not long after President Donald Trump ordered a US immigration ban for certain Muslim countries, Ahmed Hassan is in a reflective mood.

Hassan’s home of Egypt is not named in the executive order. But the rise of Trump brings him a lot of memories of his country’s own struggle for democracy after toppling its 30-year ruler, Hosni Mubarak.

It was late 2012 and Egypt was charged up. Young Egyptians like Hassan, who hadn’t stopped demonstrating since the 2011 uprising, were back on the streets in anger after the post-dictatorship leader, Mohammed Morsi of the Muslim Brotherhood, decreed himself unlimited powers.

“During the interview, Friedman asked me why Egyptians had voted for Morsi in the first place and why didn’t we now wait and let him get on with his work until the next election,” Hassan recalls.

Hassan, 30, whom Friedman described in his article as “one of the original Tahrir rebels,” tried to explain that they couldn’t wait because they feared Egypt was sliding into another dictatorship.

He asked Friedman what he thought. “Friedman said to me, ‘You should let Morsi finish the term and hold him to account at the next election in four years’ time. That’s how democracy works.’” 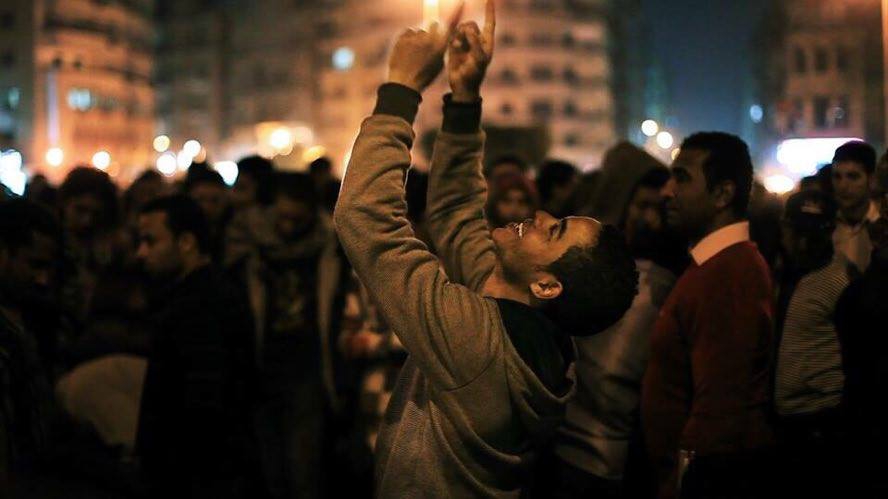 Egyptian protester Ahmed Hassan celebrates in Cairo's Tahrir Square in February 2011 after Mubarak announced he was stepping down.

Hassan, who starred in a 2013 Oscar-nominated documentary about the Egyptian revolution, “The Square,” admitted to feeling frustrated, and even patronized, by what he thought was the widely held idea that Egyptians didn’t understand democracy.

“Democracy isn’t simply ballot boxes,” Hassan says. It’s about fighting for and protecting precious rights and freedoms all the time.

“I would like to go back and ask Friedman the same questions he had asked me: How could Americans elect Trump? Shouldn’t you wait and let him get on with his work and then hold him to account at the end of the term?” He says. Then he added, “Or do you now understand what I meant when I said democracy was more than just voting?”

Deposed Egyptian President Mohammed Morsi behind bars after a court sentenced him to death in June 2015. Last year, Egypt's highest appeals court overturned the capital punishment sentence, but he still has other hefty jail sentences.

For Egyptians, there are ironies on multiple levels when looking over at the United States.

Some pro-democracy activists in Egypt view the behavior of Trump — widely criticized as anti-Muslim, although he denies it — as mimicking that of an unlikely figure: the jailed Islamist ex-President Mohammed Morsi.

Incidentally, the Trump administration is considering designating Morsi’s Muslim Brotherhood a “terrorist organization.” That would likely anger some friendly Arab groups but would please Egyptian President Abdul Fattah al-Sisi, whose government classifies the Brotherhood as terrorists and has cracked down hard on the movement.

In July 2013, Sisi led the military to remove the democratically elected President Morsi, who remains in prison on multiple charges related to spying and violence against protesters.

Some Egyptians say Americans can learn from Egypt’s failures if they want to effectively challenge Trump.

Take Mahmoud Saber, a 30-year-old media consultant for a nonprofit in Cairo who was a regular at the protests during the revolutionary years of 2011-13. He thinks “Morsi came totally outside of the system of the old regime” — a bit like how Trump was an outsider with no prior experience in government. To be fair to the Egyptian, he had served in parliament from 2000 to 2005.

Like Trump, Morsi was not initially his party leaders’ preferred candidate, but they eventually came around.

In the second round of Egypt’s 2012 presidential election, voters had to choose between Morsi, a US educated engineer, and Ahmed Shafiq, an ex-military man who’d been Mubarak’s last prime minister. “They were not the best” candidates, Saber says.

Related: These young Egyptians led a revolution. Now their frustrations are mounting under Sisi.

Timothy Kaldas, a researcher at the Tahrir Institute for Middle East Policy, agrees.

“The option was basically, do you reject having a revolution or do you vote for also a terrible person who happens to be at least outside of the government? So people voted for the guy that happened to be outside the government,” says Kaldas, who also stood in solidarity with revolutionaries during the 18 days of uprising that led to Mubarak’s toppling.

Morsi won by a narrow margin. When he came to power, in June 2012, he promised to lead a government “for all Egyptians.”

Soon after Trump took office in January, he did something that prompted more Morsi parallels. On Jan. 30, the US president abruptly dismissed Sally Yates as acting attorney general. He was within his rights: It’s a political appointment and she was a holdover from Barack Obama’s administration — and she defied Trump by telling Justice Department lawyers not to defend his order barring certain Muslims from entering the US. But the move worried Trump critics that he was determined to plow ahead with a controversial agenda at any cost.

That reminded some Egyptians of Morsi’s dismissal in 2012 of Mubarak-era Attorney General Abdel Meguid Mahmoud. (He was later reinstated after Morsi’s ouster.)

True, on the face of it, the scenarios may seem to bear little resemblance. After all, how could Morsi firing a dictator-era prosecutor compare to Trump’s dismissal of an official in a democracy with a long history of rule of law?

However, according to analyst Kaldas, there are some valid comparisons between the two. Sure, Egypt’s judiciary needed reforming, Kaldas said, but he questioned Morsi’s intentions for going after the top prosecutor and the courts in the middle of a democratic transition, when they were the people who would hold him to account.

What’s more, Morsi did not go after what Kaldas considered an “obviously corrupt police force.” It suggested Morsi wanted to “co-opt” the police, Kaldas said. Like Trump, Morsi based his actions on expediency. “And when you do that you undermine your own credibility. And that’s what [Morsi] did.”

‘The relationship with Trump will be good’

Trump is also accused of acting like another Egyptian: the country’s current strongman, Sisi.

They do seem to like each other. Trump once praised Sisi as a “fantastic guy.” And Sisi boasted of being the first leader to call Trump after his election win.

The US president's demonization of the press — “fake news,” “enemy of the people” — looks at times like moves right out of Sisi’s handbook.

Successive Egyptian governments have attacked journalists and portrayed a conspiracy to undermine the state, especially by foreign media. Sisi has been exceptionally vigorous. Egypt was the third biggest jailer of journalists last year, after Turkey and China, according to a report by the Committee to Project Journalists.

Now, that journalists' group says press freedom is coming under threat in the US too, and issued a safety advisory after Trump’s order on immigration.

Related: In Egypt, even helping street children can land you in prison

However, certainly not all Egyptians see a resemblance between Trump and their leaders.

Kal Nawar, a 28-year-old Egyptian American working for the United Nations, thinks the US context is “completely different” and incomparable with Egyptians’ experience.

And he’s not the only one. Wagih Hamid, a 74-year-old retired military officer, says Trump is not similar to Morsi or Sisi. In fact, Hamid is optimistic about what a Trump presidency means for Egypt: “I think the relationship with Trump [for Egypt] will be good. Both countries want to fight terrorism and Egypt is doing a good job fighting it,” he says.

Some Egyptians who used to protest, like former revolutionary Saber, are feeling heartened by the mass demonstrations and new zeal of activism engulfing the US. They see Trump’s election as a necessary wake-up call for Americans.

“It’s a good moment for America,” Saber says, in order for them “to appreciate that they had really nice presidents and they had stability and mature leaders, even George Bush.”

However, Kaldas is troubled by what he sees as America’s repetition of Egyptians’ experience in the Morsi era. The Tahrir Institute researcher is of Egyptian descent, was born and raised in the US and moved to Cairo in 2008 and experienced Egypt’s revolution. He saw firsthand in Egypt the real cost of failure — and fears Trump is causing irreparable long-term damage to US institutions.

The constant protesting during Egypt’s revolution meant that the Brotherhood, army and business leaders were making deals in meetings, while sidelining demonstrators who were distracted on the streets.

Kaldas also thinks Egyptian protesters failed to explain to the wider public why they were demonstrating. After all, he said, the public was “not going to come to the square to find out.”