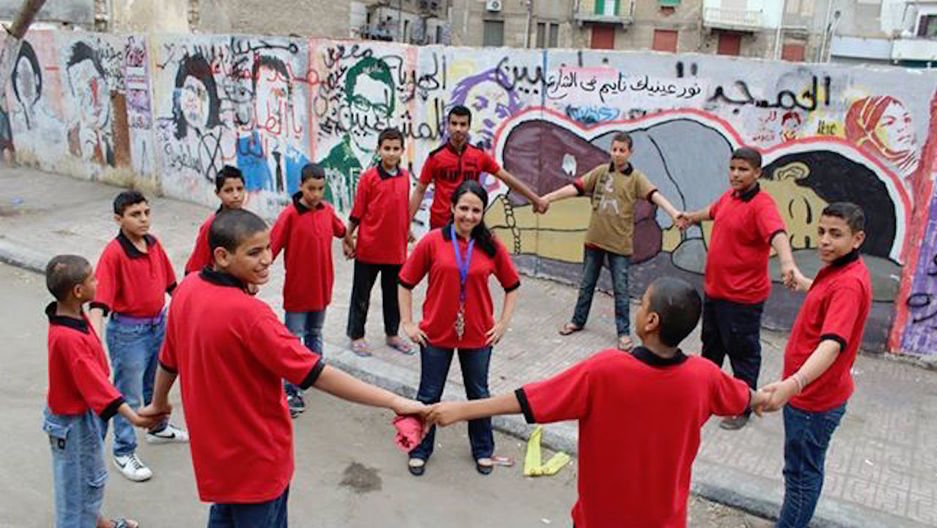 Morning circle time with Aya Hijazi and some of the children the group works with outside the Belady Foundation.

“She has read a lot of books,” says Basel Hijazi about his sister Aya. “Novels do help her escape the reality she is living.”

The “reality” he’s referring to, others might call a nightmare. Aya Hijazi, who turns 30 in January, has been in an Egyptian prison since May 2014.

Hijazi, a dual citizen of the United States and Egypt, and her Egyptian husband Mohamed Hassanein were arrested on May 1, 2014, after the humanitarian group they co-founded to care for street children in Cairo was raided by Egyptian police. Another six volunteers at their Belady Foundation were also arrested.

Update: In April 2017, following months of engagement by the Obama and Trump administrations with Egyptian authorities, a Cairo court dropped the charges and freed Hijazi and her colleagues. Read more.

But the case has implications far beyond these humanitarian workers. Analysts say they have been caught up in one of the fiercest crackdowns on human rights and dissent in Egypt’s contemporary history — even worse than during the dictatorship that was deposed in 2011. Now, rights groups are questioning whether America's incoming Donald Trump administration will pressure the Egyptian government on rights abuses. 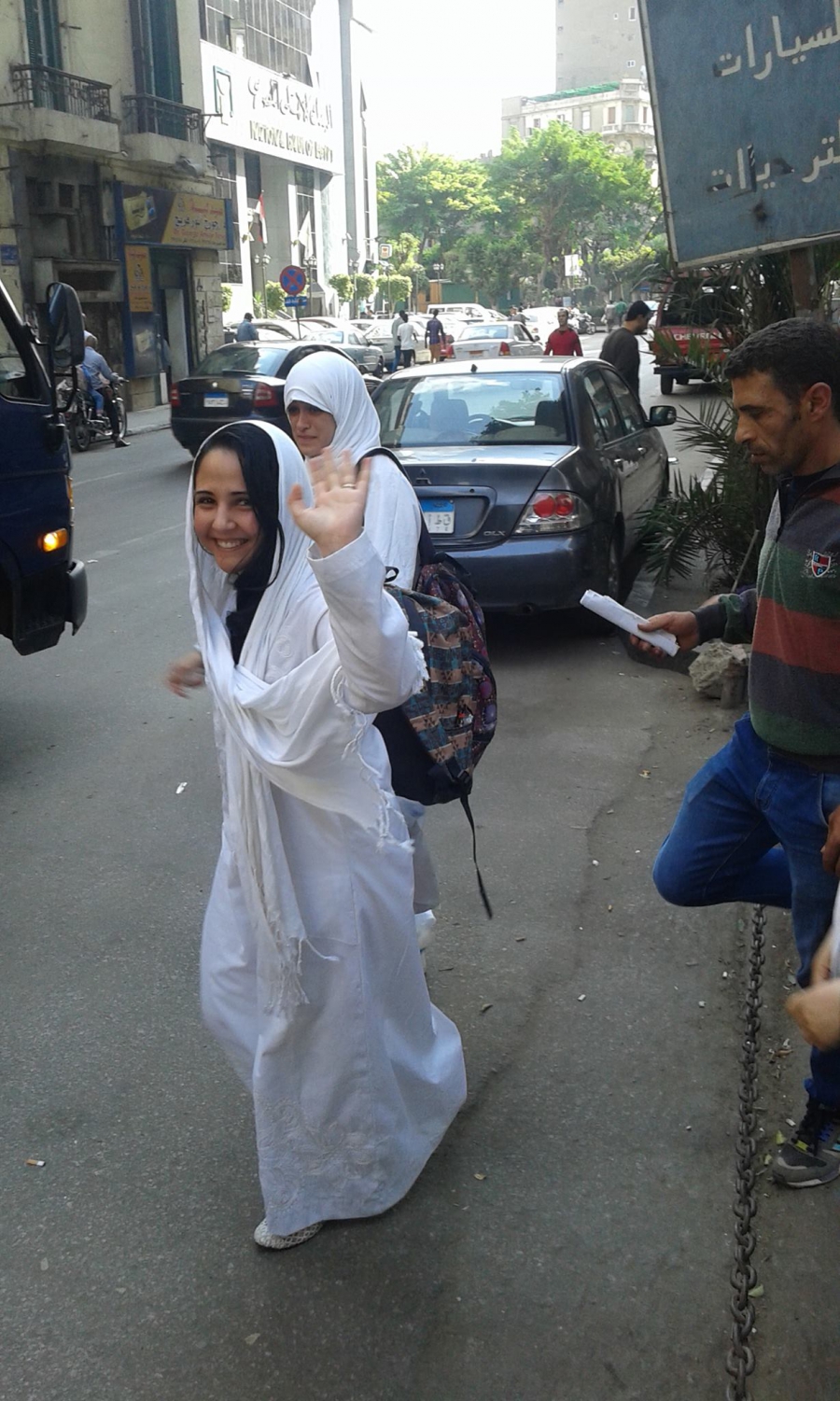 After a detention hearing in 2015, Aya Hijazi waving and smiling to her family.

The charges against the foundation workers are numerous: They include running an unlicensed organization, fraud, holding children captive, inciting children to demonstrate against and throw stones at security forces, torturing and sexually abusing children.

The couple’s lawyer, Ahmed Saad, told PRI the case was “fabricated,” a view shared by Hijazi’s family and colleagues.

Egypt’s public prosecutor ordered a forensic examination of the children. The subsequent report disproved the allegations of torture and sexual assault, says Mohamed Zaraa, a member of the Cairo Institute for Human Rights Studies, which is providing support to Hijazi and her co-defendants.

Zaraa adds that the Belady Foundation was technically legally registered. “According to the NGO law you can go register and wait 60 days for approval. If the 60 days pass with no rejection, you’re OK to go ahead,” Zaraa says. “So 60 days had passed with no rejection.”

When contacted for comment, a Ministry of Social Solidarity spokesperson said she couldn’t find a trace of Hijazi’s humanitarian group on file. “I can only comment when it comes to NGOs that are registered in the ministry data base. I am sure she is not as I checked not less than 48,000 files and names which are in our data,” spokesperson Olfa Elsalamy said.

Yet, according to Zaraa, “they even got an approval to open a bank account.” And their lawyer adds, “[the Belady Foundation] organized activities with the Cairo mayor’s office and Egypt’s Cabinet.”

So why then were Hijazi and Hassanein, who used their wedding funds to open the foundation, arrested?

“Her arrest is the perfect opportunity for a government that is at all-out war with civil society and NGOs as evidenced by the reopening of the 2012 NGO trial and the introduction of an incredibly restrictive NGO law,” says Nancy Okail, executive director of the Tahrir Institute for Middle East Policy.

By “NGO trial,” she means Case 173, also known as the “foreign funding case.” It’s a long-running investigation of nongovernmental organizations that are alleged to have acquired illegal foreign funding to harm Egypt’s national interests. Okail herself, who is now based in the US, was tried in this case and sentenced in absentia in 2013.

Investigating judges revived the case earlier this year — resulting in travel bans, asset freezes, as well as threat of closing organizations and possible 25-year sentences for some human rights defenders if found guilty.

Others say the case is driven partly by anti-American sentiment.

In December, a Washington Post editorial said the government of Egyptian President Abdul Fattah al-Sisi is hunting what it “considers to be Washington-sponsored subversion in his country.”

“According to the regime’s conspiracy theories, US-backed nongovernment groups are bent on overthrowing the government,” the Post said. “In other words, Ms. Hijazi is imprisoned not in spite of her American citizenship, but because of it.”

In November, Egypt’s parliament approved a new NGO law that will give security agencies even more control over the funding and work of aid groups. Human Rights Watch says the legislation “would effectively ban what remains of the country’s independent civil society groups.” Many view it as an escalation in the government’s attack on civil society. It has yet to be ratified by the president.

Those working on matters of political rights have been the main target of this clampdown. However, Hijazi and Hassanein’s defenders say their work was not about that. They say the couple was focused on local development: providing much-needed care, education and skills to Egypt’s homeless children, so that they grow up to be good citizens and integrated members of society.

“They chose street children because they thought it was one of Egypt's biggest problems that needed to be addressed quickly, because street children are considered time bombs if not helped in time,” says Hijazi’s brother.

The Belady Foundation’s slogan is “Looking at our children on the street in a different way.” Its unique approach included recycling workshops and art classes for impoverished children, on top of teaching those not at school to read and write.

Their approach is likely to have marked them, according to Zaraa. He says the new NGO law is also targeting organizations doing social work.

“There are new leaders coming up from their organizations, and those new leaders are going to challenge the leaders that exist right now, so they are seeing this as a threat in 10 years,” Zaraa said. “So that’s why they are trying to close the space. They are not allowing new leaders, with new vision outside the mainstream, people who are innovative and solving problems, which the government is not.”

Zaraa himself has been banned from travel for reasons unknown to him. His Cairo Institute for Human Rights Studies along with the organization’s founder, Bahey El Din Hassan, have also had their assets frozen in the “foreign funding case.” He thinks the institute’s closure is imminent.

Though he acknowledges that his institute’s ability to support Hijazi and her co-defendants has been impaired given the group’s own crisis, he says they have nevertheless done the best they can in the circumstances. That includes ensuring international legal observers are present during the trial to monitor proceedings.

Will the US pressure Egypt?

In September, a group of legal observers concluded that “multiple violations of international law” against Hijazi occurred during the trial. The American-Egyptian and her Egyptian co-defendants have been held in pretrial detention over Egypt’s two-year limit, although one of the volunteers was recently granted bail on health grounds. The observers’ report also criticized the prosecution’s “failure to produce any evidence before the court.”

And the defense has found it difficult to speak to key witnesses for questioning, like the children Hijazi allegedly held captive, says her lawyer, Saad. “The court told us they don’t have their contact details as they were handed back to their parents,” he says. “When we asked for permission to search for the children, the court refused.”

Though initially quiet on the case — the US government became more vocal over the summer and fall. A statement issued by the White House in September said, “The United States calls on the Government of Egypt to drop all charges against Hijazi and release her from prison.” (It did not mention her husband and the other co-defendants.)

Demands for her release have also come from some members of Congress, including representatives Don Beyer and Gerry Connolly and Senator Tim Kaine, the former vice presidential candidate, from Hijazi’s home state of Virginia.

However, with incoming President-elect Donald Trump — who has expressed his intent for close relations with Egypt — there are fears that the case will be way down his list of priorities.

“I am definitely concerned with the possibility that the US government may stop pressuring the Egyptians on the case,” Okail says.

Trump referred to Egyptian President Sisi as a “fantastic guy,” after meeting with him on the sidelines of the United Nations General Assembly in September. The US president-elect has yet to acknowledge the country’s deterioration in human rights.

And after a recent meeting between Egypt’s Foreign Minister Sameh Shoukry and US Vice President-elect Mike Pence, PBS Newshour pressed the top Egyptian diplomat on whether human rights issues had been specifically raised. Shoukry responded “no.”