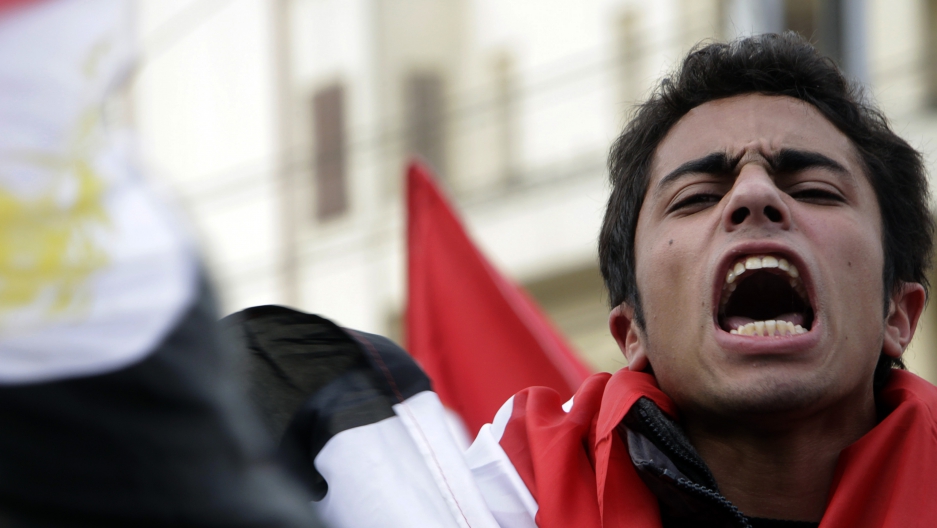 An anti-government protester participates in demonstrations against Egyptian President Hosni Mubarakin in front of the presidential palace in Cairo, Feb. 11, 2011.

Mohamed Soliman first witnessed state-imposed repression in Egypt at an anti-government demonstration when he was 12 years old.

“My uncle was a political scientist and a human rights advocate,” said Soliman, 25, who now works with the liberal Al-Dostour (Constitution) Party as a political officer. “The cops came to the peaceful protest with their sticks. They beat my uncle and dragged him through the streets to make an example of him. The idea was to deter future protests.”

But the incident only served to inspire Soliman, who helped lead the 2011 demonstrations in downtown Cairo’s Tahrir Square that brought down President Hosni Mubarak, who had served as Egypt’s military and political leader for 30 years. Soliman also took part in the youth-led uprising against Mubarak’s successor, Mohammed Morsi, a democratically elected Islamist president who was overthrown by a military coup in 2013 that installed current Egyptian President Abdul Fattah al-Sisi.

Sisi has severely restricted protests of the sort that galvanized Egyptian 20-somethings over the past six years. That means that these days, young people like Soliman have fewer outlets to express their hopes and desires for a new Egypt. Some say the resulting frustration is causing simmering unrest in the country, and it’s not clear where that energy will go next. 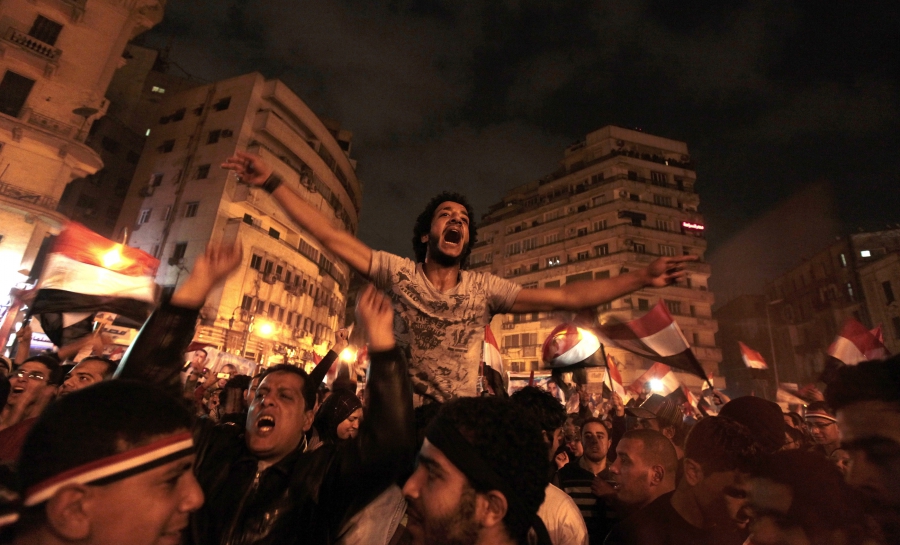 “Youth are angry because their dreams of living in a democratic country that respects human rights and law have been terminated by a succession of authoritarian regimes,” said Mohamed Salem, a program officer at the Egyptian Observatory for Training and Consultation, a Cairo-based NGO that provides management and leadership training for the nonprofit sector.

“A frustration is setting in that’s keeping many youth from doing anything to try and fix our social problems," he added. "But there’s also the more dangerous trend pushing the youth onto the road of radicalization and joining Islamist groups like Islamic State.”

In 2011, when hundreds of thousands took to the streets and deposed Mubarak, many involved in the protests finally thought they would get real change. Six years later, many young people say the revolution brought nothing but dashed hopes.

“It does not matter what you decide to do or how many sacrifices you make,” said Omar Khedr, a 24-year-old engineer from Obour City, about 20 miles northeast of Cairo. “Our choices are limited to [the] Muslim Brotherhood and the military.”

“Sisi has sent more than 40,000 people to prison for joining political groups, allowed the army to control more than one-third of the national economy, and he’s failed to take back control from the terrorists in Sinai Peninsula,” added Khedr, who is unemployed. “Those days in Tahrir Square calling for a change in Egypt’s politics now feel more like a dream than an actual event I witnessed with my eyes.” 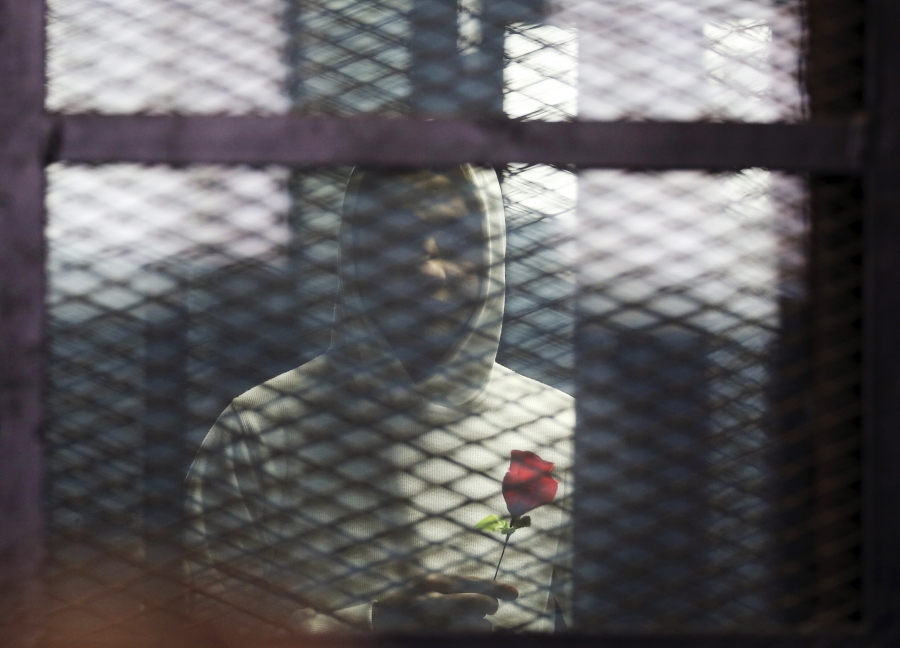 A defendant holds a rose during the retrial of 21 activists on charges of breaking a law that bans protests without a police permit, in Cairo, Feb. 12, 2015

Some young people continue to pursue activism — but it’s a risky option these days.

“One out of 10 people doing jail time are incarcerated for political reasons, so most of my friends have been in jail once or twice,” Soliman said. “We get them legal support by finding lawyers, and collecting money for bail. Sometimes we also try to talk to the regime — but in most of the cases that doesn’t work.”

Sisi has pardoned a handful of jailed activists. But the Arab Network for Human Rights estimated recently that about 60,000 political detainees are sitting in Egyptian jails. Most are under 30, the network said. Some are as young 16.

Read more: What really happened on the day more than 900 people died in Egypt

Besides a lack of political freedom, young people have other reasons to be concerned about the future. More than a quarter of Egypt’s working-age youth are unemployed. More than half live below the poverty line.

“The people who say that the Egyptian Revolution had no program other than the resignation of Mubarak are wrong,” said Mahmoud Saber, 29, who joined the Kefaya (Enough!) movement as a high school student in 2005. “It had a frame that called for economic and social justice and respected the right of workers to organize, and the freedoms of individuals.”

Saber, who took part in the protests to oust Mubarak, also was in the streets to pressure Morsi to resign.

“He had no economic program, had no regard for worker’s or women’s rights and had no real connection to the demands coming from the youth on the streets,” Saber said of Morsi. 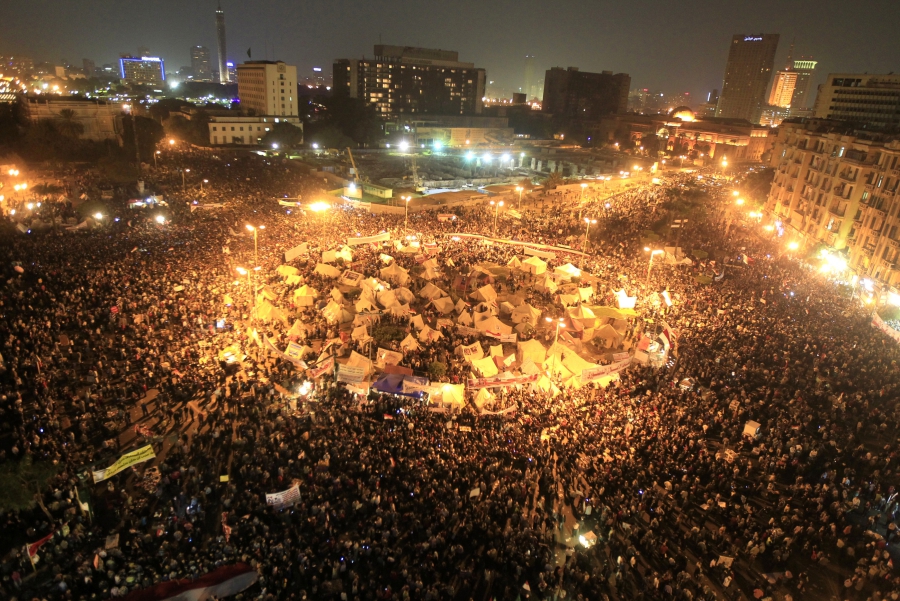 The center’s last publicly released poll on the president's performance in October showed that 77 percent of Egyptians older than 50 would re-elect Sisi compared to only 41 percent of voters younger than 30.

If youth opinion of Sisi continues to drop, it will be hard to prove with data. Pollsters haven’t conducted surveys of Sisi’s popularity since the value of the Egyptian pound plummeted late last year and the country enacted tough austerity measures required to secure a three-year, $12-billion loan from the International Monetary Fund.

"With so many of my friends locked up in jail and the lack of support for basic education, I have started to feel that I don't fit here anymore and am thinking about leaving. Two years or three years ago this idea wouldn’t have ever crossed my mind.”

Still, it’s clear from speaking to young Egyptians that many are disappointed with the state of things.

“Six years ago I was expecting [to live] in liberty and to see social equality become a real part of government policy,” said Waleed Abou Haddid, a 29-year-old who sells wallets and belts from a small stand in a market near Al-Azhar University. “Mubarak is gone but nothing has changed.”

On top of political repression and the economic situation, some young people say the government's moves are deliberately targeting programs aimed at younger Egyptians.

“With so many of my friends locked up in jail and the lack of support for basic education, I have started to feel that I don't fit here anymore and am thinking about leaving,” Babker said. “Two years or three years ago this idea wouldn’t have ever crossed my mind.” 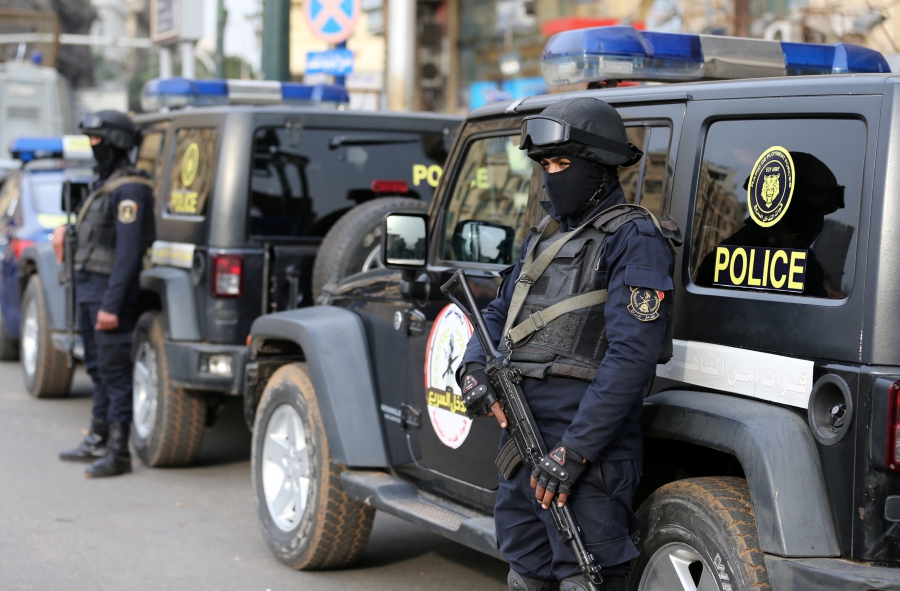 Egyptian security forces stand guard during the sixth anniversary of the 2011 uprising at Tahrir Square in Cairo, Egypt, Jan. 25, 2017.

The president's advisers seem aware of the decline in his support, especially among the young.

“The national projects underway now are generating between 2 to 3 million new jobs,” Sisi told young loyalists at a forum held Monday by the Presidential Youth Leadership Program. “We want to channel [young Egyptians] in the right direction to optimize their talents for the benefit of the country.”

“Nothing will happen here until there is investment and an overhaul of the education system,” said Zarka. “I don’t expect Sisi to fund the needed technology in classrooms, let alone initiate teacher training and curriculum reform that would encourage critical thinking.”

Sisi’s decision to focus on large-scale projects to boost the economy, like a new capital city to replace Cairo and a Russian-built nuclear power reactor, reflected the depth of Egyptian officials’ wrong-headed thinking, said Saber, who participated in both the anti-Mubarak and anti-Morsi protests.

Related: Some Egyptians are comparing Trump to an unlikely, Islamist figure

The young activist thinks the government should be focusing on improving Cairo and other cities and building solar electricity farms in the country’s vast uninhabited deserts. He doesn't see much chance of the government changing its stance, and faces arrest if he joins others taking to the streets to make their voices heard.

“I can’t say I am on a diet and then go to McDonalds and order a large double cheeseburger and fries combo and ask for a diet cola,” Saber said. “And the president can't pretend that he is listening to the voices of youth and then put them in jail because they are expressing themselves.”