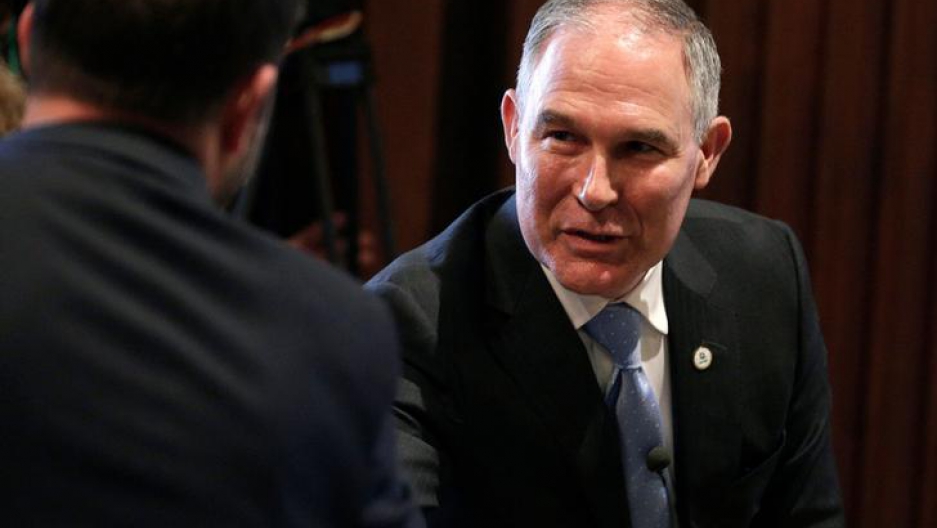 Recently confirmed head of the Environmental Protection Agency, Scott Pruitt, shakes hands with an employee of the agency in Washington, DC, on Feb. 21, 2017.

President Trump, do you really think climate change is a hoax?

His remarks rang a conciliatory tone after a confirmation process that was so controversial, EPA employees worked until the eleventh hour to prevent his ascendency to a state agency that both Pruitt and his boss, President Trump, have expressed interest in dismantling.

Pruitt and Trump may share similar views on pruning the EPA. But there’s one question they appear to disagree on.

It’s kind of an important one.

Is climate change real? Or is it a hoax?

Pruitt himself has remarked in the past that the role of humans in causing global warming is uncertain at best. During his confirmation hearing, however, he appeared to walk back his skepticism. When asked if he believed that the Chinese government manufactured the idea that climate change is a man-made threat to the Earth’s ecosystem, Pruitt flatly stated, “I do not believe climate change is a hoax.”

It might seem outlandish to suggest that China invented climate change. Yet, it’s a view that Trump himself shared on Twitter several years before he announced his bid for the White House.

The concept of global warming was created by and for the Chinese in order to make U.S. manufacturing non-competitive.

A little more than one year later, Trump used more colorful language to describe his views on climate change.

This very expensive GLOBAL WARMING bullshit has got to stop. Our planet is freezing, record low temps,and our GW scientists are stuck in ice

Now, Pruitt is no convert. He may have admitted that climate change isn’t a hoax, but he also failed to mention “climate change” or “global warming” by name in his first public remarks as EPA chief.

Yet, Pruitt’s shift, even if it’s a slight one, raises the question of whether or not Trump — and for that matter, leaders around the world who share his doubts about climate change — would ever reconsider his views.

So, Mr. President, just how deep does your climate skepticism run? Do you believe climate change is a hoax? Click here to tweet the question to the president.