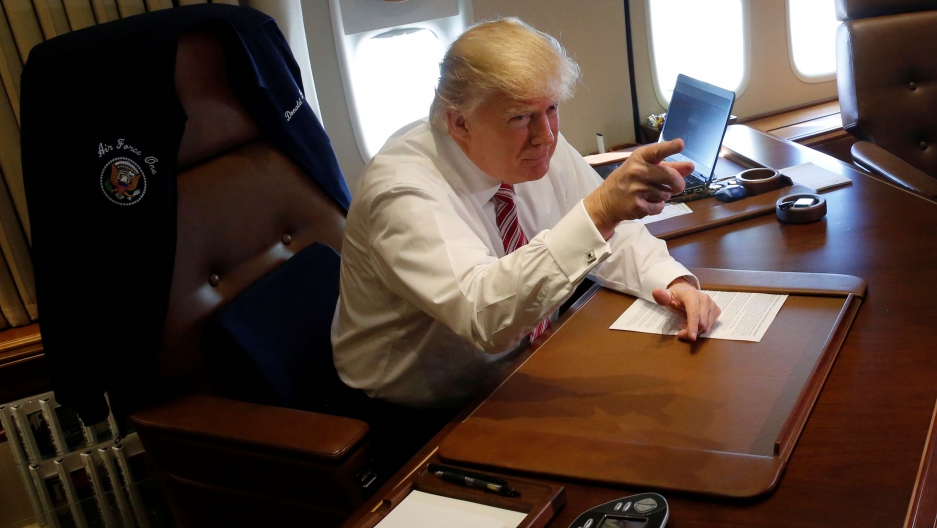 President Donald Trump speaks briefly to reporters as he arrives aboard Air Force One at Joint Base Andrews, in Maryland, on Jan. 26, 2017.

Scientists have reason to be scared about Donald Trump's presidency: He has falsely connected vaccines to autism, questioned the validity of manmade climate change (even scrubbing the White House's website of "climate change" references), and talked about abandoning the Paris climate agreement.

Also, he tapped a climate change skeptic to head the Environmental Protection Agency.

Generally speaking, his position on funding for scientific research is far from clear.

Related: The only physicist in Congress, on the state of science on the Hill

But Trump isn’t the only leader touting "alternative facts" as opposed to scientific ones. “There has been a climate change denial movement around the world,” says veteran science journalist Christine Russell, who is a fellow at the Harvard Kennedy School's Belfer Center for Science and International Affairs.

She says the leading denialists on this front are the US, Canada, Australia and Russia.

Australia, she says, "has had a long history and continues to have climate denialism very rampant."

However, the country was once a leader in climate science. In 2011, it proposed a carbon tax. But when mining companies and conservative coalition parties campaigned against the law, the left-leaning prime minister was ousted. Tony Abbott, a center-right politician, was sworn in as prime minister and he repealed the law. "Now there's been another swing in 2015 with the new Prime Minister [Malcolm] Turnbull who actually signed the Paris climate agreement and has faced a lot of criticism from the climate deniers and the political conservatives," she says.

A big challenge in the country is that "a lot of the media also adopted that anti-science attitude."

Climate change isn't the only topic that's generated this kind of debate.

In perhaps a more devastating incidence of science denialism, 15 years ago, former South African President Thabo Mbeki denied the link between HIV and AIDS. According to research by Harvard University, Mbeki’s AIDS policy is largely to blame for the deaths of more than 300,000 people.

“It’s a really sad case of anti-science leadership,” Russell says. “He was against the antiretroviral drugs that were being used around the world. His health minister actively promoted that herbal treatments and South African remedies and foods were a viable alternative to treat HIV/AIDS infection.”

So, what lessons can the US take away from these scenarios? Can we have an informed public debate or effective policies when leaders embrace pseudoscience? At this point, it's hard to say: “Everybody’s scratching their heads,” Russell says. "There has been a tendency sometimes, as you know in political coverage, where there will be a kind of 'he said, she said,' and they might quote a scientist, and then they will put on an opposite climate denier who's not a scientist who doesn't know anything about the evidence — and it's really not a fair fight.

“But I think people are marching around the world. There was the large Women’s March and now scientists are planning a march on Washington. People are gearing up to really, really fight back.”

Related: People around the world are helping the US save its climate data