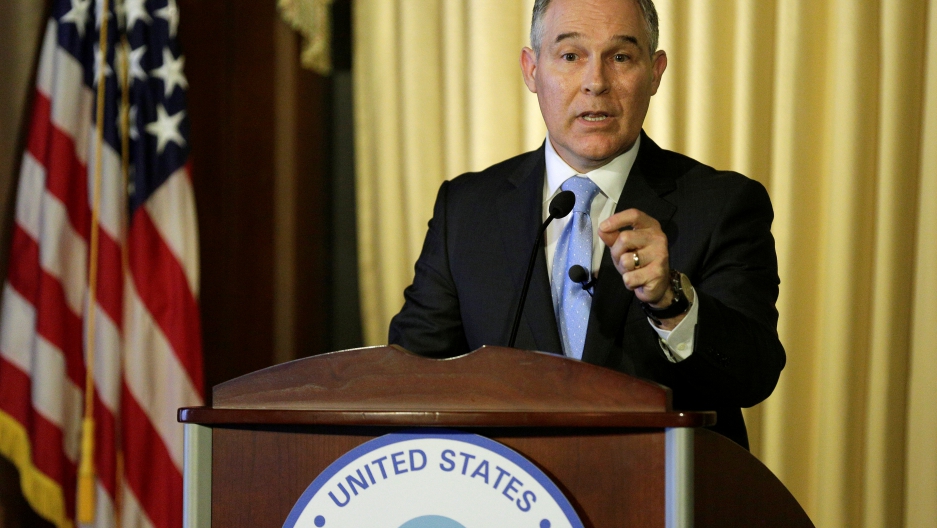 Scott Pruitt, in his first address to staff since he took over as head of the Environmental Protection Agency, urged civility and said he would “listen, learn and lead.”

“We ought to be able to get together and wrestle through some very difficult issues and do so in a civil manner,” Pruitt told staffers Tuesday at the EPA headquarters in Washington, DC.

Signaling a shift in the agency’s priorities, Pruitt focused his remarks on creating a pro-business, regulatory environment rather than cleaning up air or water.

“Regulators exist to give certainty to those that they regulate,” Pruitt said. “Those that we regulate ought to know what's expected of them so that they can plan, and allocate resources to comply. That's really the job of a regulator.”

The agency can be “both pro-energy and jobs and pro-environment,” Pruitt said.

Though he avoided specific policy proscriptions, Pruitt laid out his broad vision for the agency — shifting regulatory power back to the states and avoiding overreaching the authority bestowed upon the EPA by Congress.

Pruitt also name-dropped Founding Fathers and talked baseball in a speech that struck a conciliatory tone after his controversial nomination process.

Pruitt sued the EPA more than a dozen times while he was attorney general of Oklahoma.

But the new administrator didn’t touch on that during his remarks to his staff.

Nor did he directly address the Trump administration’s plans to roll back two major environmental regulations from the Barack Obama era, which The Washington Post reports could be repealed by executive orders as early as this week.

The first rollback will target the Clean Power Plan, a rule requiring electric producers to cut carbon pollution by about a third by 2030. It’s the backbone of the US plan to meet carbon reductions promised in the 2015 UN Paris climate agreement. Reversing the plan was one of President Donald Trump's campaign promises.

Pruitt told a columnist from The Wall Street Journal last week that it’s not clear to him that the EPA has the authority to regulate greenhouse gases, which cause climate change.

The second regulation expected to be reversed by executive order in the coming days is a rule that extends federal authority to more waterways across the country.