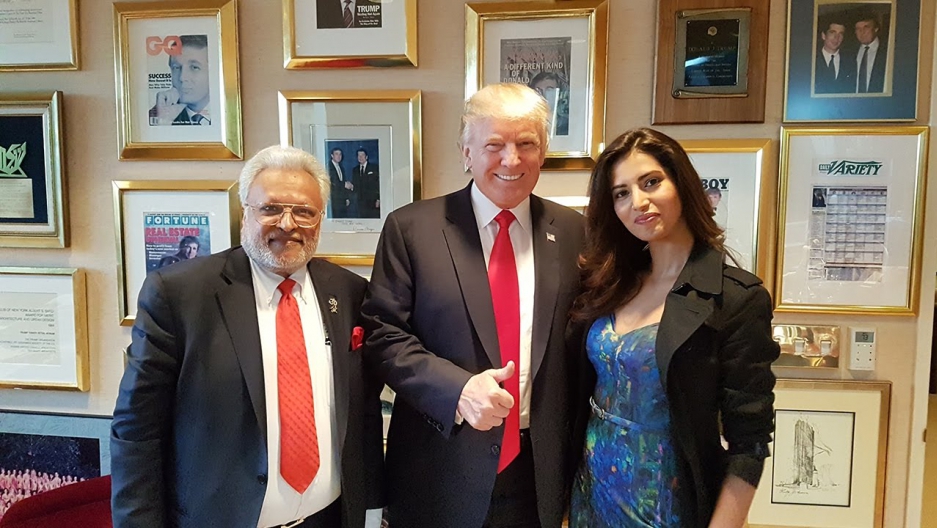 Then, one night in 1979, Shalabh Kumar met Ronald Reagan.

Reagan was then a presidential candidate speaking at the Illinois Manufacturers' Association dinner. Kumar was there with his wife, and he held up his hand to ask a question. Reagan pointed to him and said he'd get right back to him, then never did.

But after dinner, Reagan had some security guys bring the Kumars to his table.

“He asked me, ‘Why are you guys, why are you Indian Americans, Democrats?’” Kumar recalled. “And I said, ‘I'm a minority! So all minorities are supposed to be Democrats.'”

Kumar told Reagan he was a Punjabi immigrant who owned a small electronics firm.

“He says, 'Well how would you like the [government] to take away two-thirds of what you make?’” Kumar said. “I said, ‘Really? That's not right.’ And he says, ‘See? You're a Republican.'"

Exaggerations aside, Reagan convinced Kumar that American politics were no longer about race; they were about money. Kumar went on to found the first Indian American Republican organization. He sat on Reagan’s informal small business council. He met high-ranking Republicans like former House Speaker Newt Gingrich.

And it was Gingrich who ended up introducing Kumar to then presidential candidate Donald Trump. Kumar went on to organize an advertisement which he says rallied Indian Americans to Trump’s camp. In it, Trump says, "Aabi baar Trump sarkaar.” It's a phrase in Hindi that means, "This time a Trump government." That’s the same slogan (aside from Trump's name) popularized by another leader who appeals to nationalist passions: Indian Prime Minister Narendra Modi, who came to power there in 2014 in part because of his performance in places that recently experience conflict between Hindus and Muslims.

“Pronunciation was a little challenging,” Kumar chuckled about Trump's performance in the advertisement. “He'll try, get a little frustrated, and then try."

Also: How Donald Trump ended up at a Bollywood-themed Hindu rally in New Jersey

While Republican Indian Americans made huge displays of support for Trump, liberal Hindu Indian Americans looked on with growing discomfort. Nishith Acharya, a consultant and author in Boston who worked in the commerce department of the Obama administration, was ashamed that people who share a homeland with Muslims would support things like an American registry for the religious group. Acharya was director of innovation in Obama's commerce department.

"I thought it would give [Indian Americans] a bad name,” Acharya said. “I thought people would say there's this one group that doesn't know what they're doing but they're really wealthy, and so they're going with Trump."

And there's no other big Indian American group sending a different message, say, to support other people of color in the US.

“When are we going to take a stand?” Acharya asked. “How come we haven't had a press conference with leaders saying they oppose the registry?"

"They're taking people that they're already comfortable with, from the worlds that they come from, and putting them in,” Acharya said. “To me that's not being inclusive. That's just picking the people you already work with."

If that's right, Trump wouldn't be the first American leader to do that. There's plenty of precedent. Ellen Wu is an Indiana University history professor who wrote a book about so-called "model minorities." She says it's been convenient for people in power to turn to Asian Americans to suggest that America works for everyone, including racial minorities.

"America is a great place for people of color,” she said. “You just have to work hard and not make trouble and you will be fine."

And that's been a reality for some Indian Americans. Some do think they're proof that anyone can succeed in America. But they often came into the country with advantages that many other immigrants don't have. US law required them to be educated and skilled before they could immigrate.

"It's very naive to think there's no backlash in the US to the success of Indian Americans,” Davaluri said. “I think it's more important than ever to make it clear that we are first and foremost American."

For Shalabh Kumar, though, being American means supporting Trump's effort to keep America safe, even if that means profiling Muslims, keeping a Muslim registry, banning travel from Muslim-majority countries or monitoring US mosques.

Kumar said he should not be expected to show solidarity with Muslims and other people of color.

And, the lives of Indians. Kumar says Trump has promised him he won't limit the number of H-1B visas that allow Indians to come to the US to work for tech companies. Even though the administration has drafted an executive order to do just that. Bloomberg reviewed a copy of the order at the end of January.

Kumar says he also has a promise from Trump that the US will sell advanced weapons to India.

"He's totally committed to that,” he said. “That was one of the first questions I asked in my first meeting."

And Kumar says he reminds Trump every chance he gets.