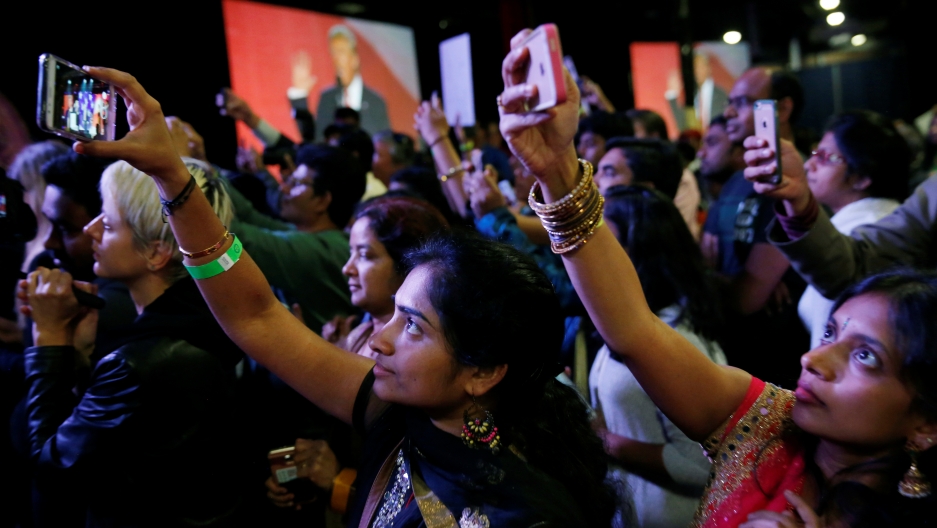 Attendees watch Republican presidential nominee Donald Trump speak at a Bollywood-themed charity concert put on by the Republican Hindu Coalition in Edison, New Jersey, on Oct. 15, 2016. Trump said during the debate on Wednesday that he met with “high representatives of India.”

"So I just left some high representatives of India,” he said. “They're growing at 8 percent. China is growing at 7 percent. And that for them is a catastrophically low number.”

He was nominally making a point about US economic growth, but many debate-watchers were wondering: Who exactly were these Indian representatives?

I AM THE HIGH REPRESENTATIVE FROM INDIA. I FOOLED TRUMP. #debatenight

It’s not immediately clear which “high representatives” he was referring to. But one theory picked up on in social media is that Trump was referring to an appearance he made on Saturday in Edison, New Jersey. He spoke to about 5,000 people at the New Jersey Convention and Exposition Center — an audience of mostly Indians and Indian Americans.

The event was sponsored by the Republican Hindu Coalition, a new lobby on Capitol Hill, and was advertised as a Humanity United Against Terror Charity event. The proceeds were to benefit Hindu refugees and victims of terror in Bangladesh and Kashmir. Before Trump’s appearance, there were performances by Bollywood stars like Malaika Arora Khan, as well as a skit in which dancing couples were attacked by “terrorists” wielding weapons of lightsabers.

At the Republican Hindu Coalition Trump event, fake Michael Jackson was followed by dancers attacked by jihadists and rescued by Navy Seals: pic.twitter.com/Ta90bv3Lw5

And when Trump finally appeared, he gave the crowd words to cheer for.

“Under a Trump administration, we are going to become even better friends,” he said. “In fact, I’ll take the word ‘even’ out, because we are going to be best friends. There won’t be any relationship more important to us.”

The implication was that he would strengthen the alliance between the US and India. But he also may have very well been referring to the special relationship the Republican Party has established with the Hindus in India and America — a relationship which provided the backbone for Saturday night’s Bollywood/Tollywood concert. 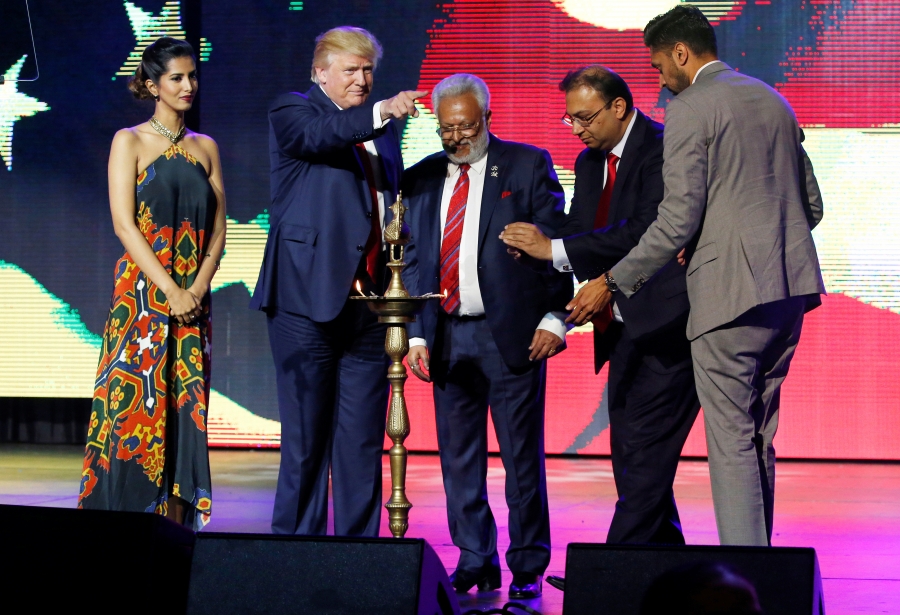 Just as most Jewish people in the US are liberal, Indian Americans, too, lean left. The 2016 National Asian American Survey shows that 53 percent of Asian Indians identify with the Democratic Party, whereas only 7 percent think of themselves as Republican. A Pew Research study shows that the views of Americans who are Hindus follow similar patterns: Only 13 percent identify with or lean toward the Republican Party, while 61 percent align with the Democratic Party.

Given the context, the Republican Hindu Coalition doesn’t necessarily represent the views of most Indian or Hindu Americans. In his pitch to the crowd, though, Kumar insisted that conservative values are Hindu values.

“I urge my fellow Hindus to think about these values, and ask yourselves, who truly represents you in Washington? Is it a president who celebrates Diwali in White House, and next day wants to give a nuclear-capable F-16, worth $658 million to Pakistan?”

The crowd booed at Kumar’s statements.

“Or is it a party that wants to cut aid to Pakistan,” he continued, “declare them a terrorist state and prevent them from acquiring nuclear-capable F-16s?” 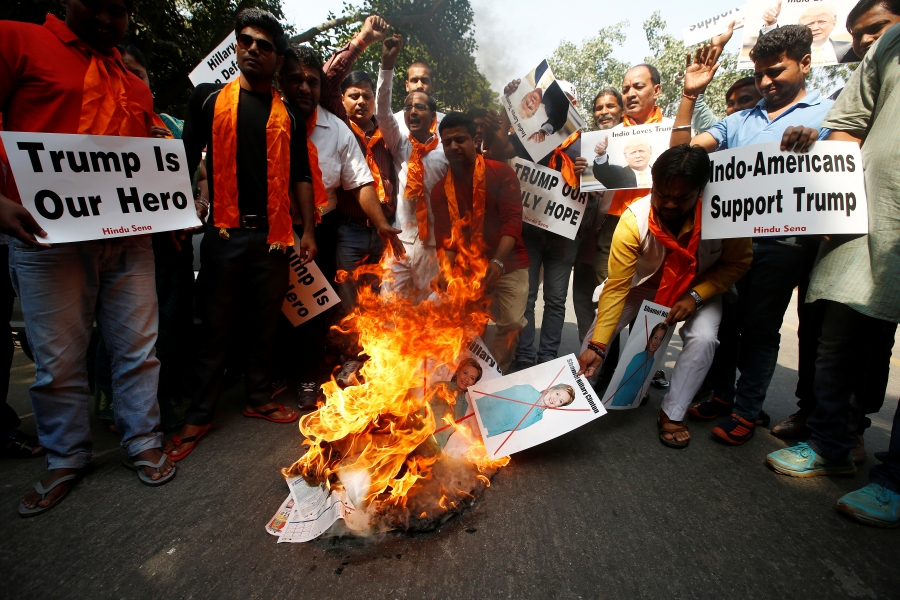 Members of Hindu Sena, a right wing Hindu group in India, burn posters of US Democratic presidential nominee Hillary Clinton during a protest against what they say is Clinton sabotaging Republican US presidential nominee Donald Trump's election campaign, in New Delhi, on October 18, 2016.

That Kumar capitalized on the tense relationship between India and Pakistan — and by extension, between Hindus and Muslims — is why many critics say the Republican Hindu Coalition and groups like Hindus For Trump ignite nationalist feelings. In India, Hindu nationalism refers to the political ideology that all Indians were once Hindu, and that the ancient civilization of the Indian subcontinent — which includes modern-day countries like Bangladesh and Pakistan — was always a Hindu civilization.

More: Why Donald Trump has a fan following in India

The near universal substitution of “Hindu” for “Indian” and vice versa during the event also pushes this ideology, even if it was a matter of convenience or laziness. India is a Hindu-majority country, but only about half of Indian Americans identify as Hindu, according to the Pew Research Center.

“There is a very small, but very, very vocal fringe among Hindu Americans that are quite conservative and ally with more of the Hindu nationalism we see in India,” says Sunita Vishwanath, a human rights activist and founder of Sadhana, a nonprofit coalition of progressive Hindus. “And their drivers, the motivations, tend to be, in my opinion, Islamophobia, and ... you know, economic interests. And I think those two interests dovetail into their support for Donald Trump in this moment.”

Right-wing political leaders in India are often accused of polarizing communities with fiery rhetoric during election seasons. But most of the attendees at the Bollywood-themed concert in New Jersey didn't read too much into the parallels: South Indian dancing star Prabhu Deva's wicked moves took center stage.

Mansi Choksi and Sonia Paul’s reporting was funded by a grant from the South Asian Journalists Association.