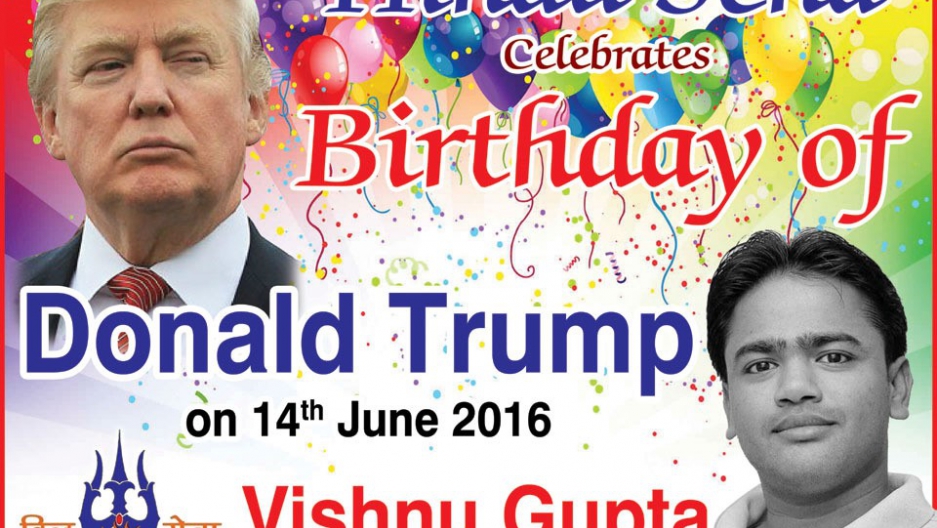 American elections rarely make the Indian news. This massive democracy has perennial political changes of its own to worry about. But US presidential candidate Donald Trump has found his way into the hearts of a strident few in India, where his name is starting to grab headlines.

Last month, a group known as the Hindu Sena held a holy fire ritual in New Delhi at which they declared Trump alone will “save humanity from Islam and Islamic terror.”

Vishnu Gupta, the president of the group that organized the ceremony, is unequivocal. “We like [Trump] because he is speaking against Islam,” Gupta said. “He has openly said what is on the mind of all Americans and of the world: ‘Islamic terror is fatal and I will end it.’” 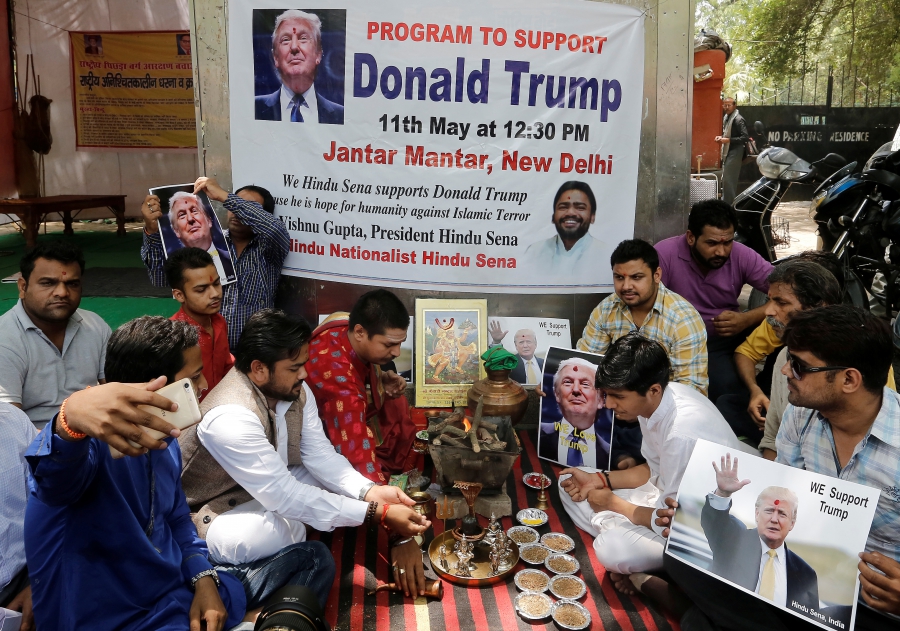 Activists of Hindu Sena, a Hindu right-wing group, perform a special prayer to ensure the victory of Republican US presidential candidate Donald Trump in upcoming elections, in New Delhi, India, May 11, 2016.
Credit:

Late last year, Trump infamously called for a temporary ban on Muslims entering the United States, citing terror concerns. He reiterated that position on Sunday following the deadliest mass shooting in modern US history at a club in Florida, carried out by an American gunman who had expressed support for ISIS.

In the imagination of the nationalist Hindu Sena, a right-wing “army” of over 25,000 known for their violent attacks on opponents, Trump would be stepping in where the Indian government has failed, to curb Islam and push back against Pakistan. Far-right groups claim that Narendra Modi was voted in as India’s prime minister mainly on the Hindu nationalist agenda — in reality, his development agenda had a massive role too — but hasn’t delivered.

“There are many states in India where Hindus are suffering, where they are being beaten up, coerced, threatened,” said Prem Rajput, a Hindu Sena member. “Mr. Modi has not addressed these problems [with Muslims] yet, but we are hoping Trump will.”

How do they envision the businessman, who has been vocal about putting America first, will come to their aid? Gupta points out that the Americans did not need permission to kill Osama bin Laden. He thinks Trump, the “protector of mankind,” will do a better job of targeting terror in Pakistan than President Barack Obama. “His name is Barack Hussein Obama, after all,” said Gupta.

The Hindu Sena aren’t Trump’s only far-right fans in India. The Akhil Bharat Hindu Mahasabha — the oldest right-wing group in India, best known for supporting Gandhi’s assassination — also believes that a President Trump will be the answer to fighting Islamist extremism.

“Hindus don’t just think about themselves, we want world peace,” said Chandra Prakash Kaushik, the Mahasabha’s president. “That is only possible when Islamic terror is ended, and Donald Trump can do that.”

Kaushik is not worried about the ill treatment of innocent Muslims, especially as, by his reasoning, no Indians will be at risk. He claims that all Indian Muslims were once Hindu and converted under duress. “You can test their DNA, you’ll see it is Hindu,” he said.

Both Kaushik and Gupta do not believe Democratic candidate Hillary Clinton can achieve what Trump can, as she is unwilling to call out Muslims. They say that their groups will be reaching out to Indian Americans and appealing to them to vote for Trump.

Kaushik made plans to convey a special message to the candidate, too.

“Mr. Trump’s birthday is coming up, we will be sending him wishes and a message of support,” he said late last month. Trump’s 70th birthday is on Tuesday.

Gupta went a step further. He organized an all-American birthday bash for Trump at Jantar Mantar, a popular protest and demonstration site in New Delhi, to honor the billionaire with the trappings of his own culture “after utilizing ours at the havan.” There were balloons and a cake at the small spectacle, and quite a few reporters. 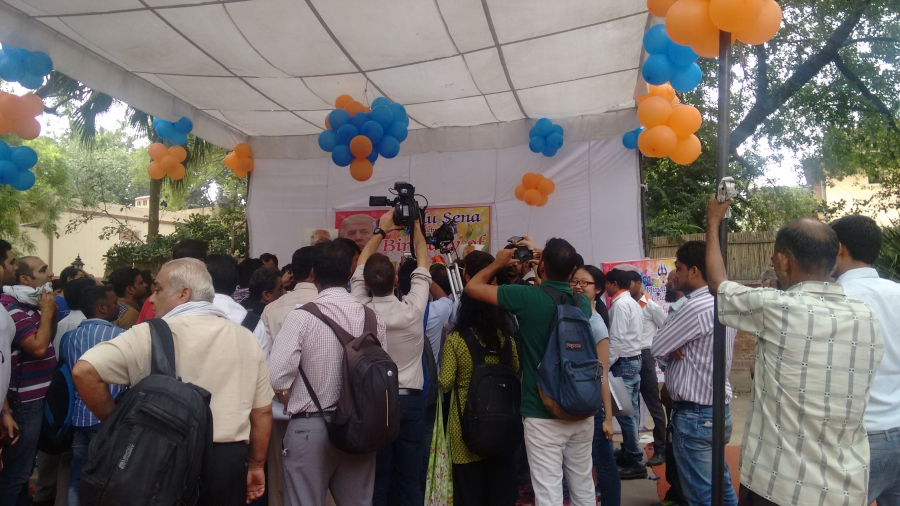 Media gather around the public "birthday party" that Hindu Sena members held for Donald Trump in New Delhi on June 14, 2016. 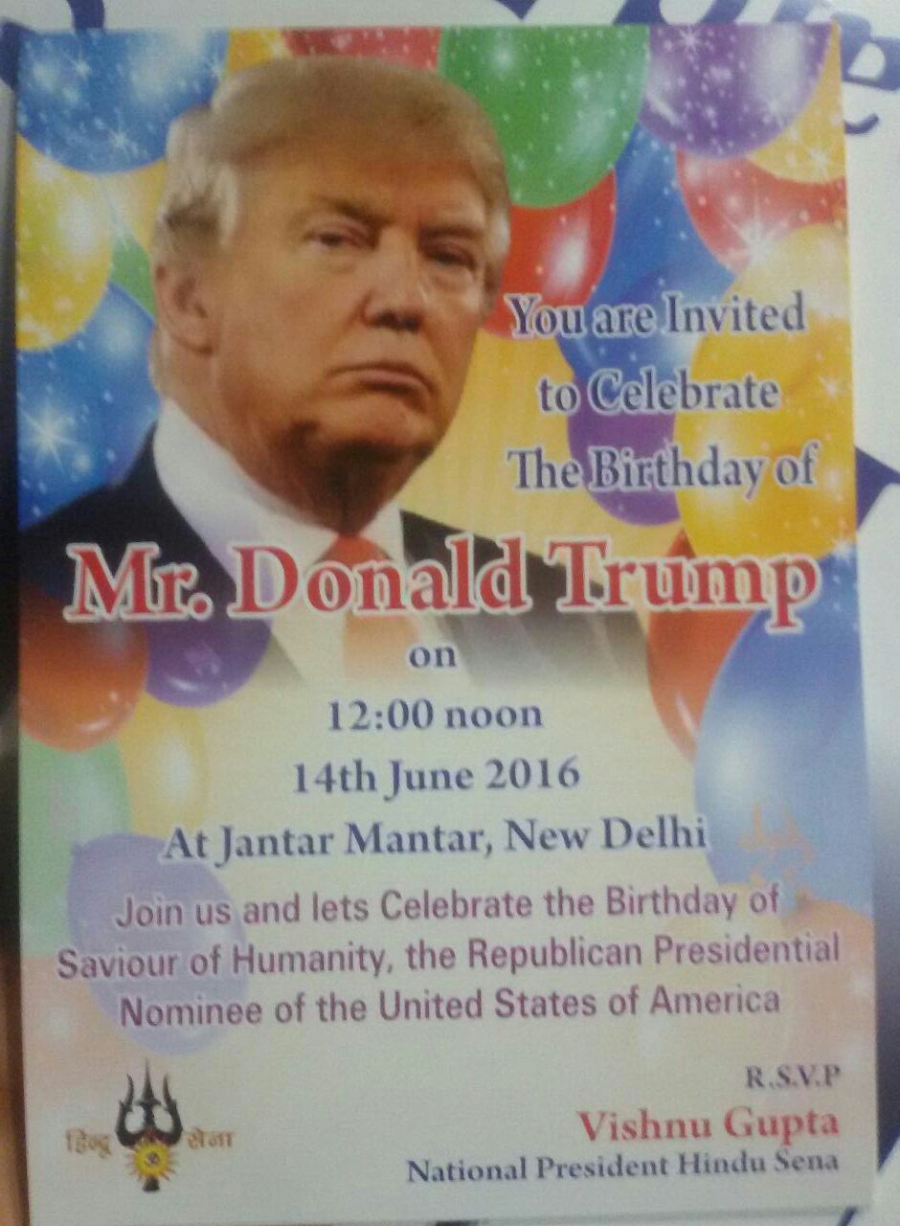 Gupta has also taken up the pen to request the United Nations deploy NATO troops to protect Trump, a “man of brave heart,” from radicals. He also plans to write to Modi and ask him to encourage American Indians to vote for Trump.

Indian Americans, however, may be hard to sway. In 2012, Pew Research found that 65 percent or Indian Americans were Democrats or leaned that way. Though a new Republican Hindu Coalition established last November has attempted to rally Hindu support for Republicans, Hindu Americans may not be so easily convinced about Trump’s credentials.

“I’m against Trump,” said Chandradhar Dwivedi, a retired professor based in South Dakota. “He does not have any experience in any government office, his past record as a businessman is not very clean, and above all, he is very arrogant, a loudmouth, he has insulted a lot of people and his policies are not feasible.”

Dwivedi also criticized Trump’s anti-immigrant stance, especially as the US is “a country of immigrants.” For him, the Hindu organizations in India that are calling for Trump’s victory are failing to clearly understand Trump’s politics.

“Being against Muslims does not mean he is pro-Hindu,” said Dwivedi. “I do not think any reasonable Hindu in the right state of mind would even think about [supporting Trump].”

Some in India agree. But Happymon Jacob, a professor of international studies at the Jawaharlal Nehru University in New Delhi and an expert on the India-Pakistan relationship, asserts that Islamophobia and hate for Pakistan are the concerns of a minority, “fringe” elements that do not represent broad Indian sentiment. Unlike Americans, most Indians have, so far, not taken Trump seriously.

“This support [by the Hindu right] is going to land up on the wrong side of history, as I don’t see Donald Trump coming to power,” said Jacob. He believes both Trump and the Indian right are posturing, but that their campaigns won’t amount to anything lasting.

And he’s convinced that the future US president will be Hillary Clinton, who Jacob believes will be the better option for India anyway.

“She’s been called a Washington insider, and we know how to speak with her, negotiate with her. She’s the known devil,” said Jacob. “Trump on the other hand is completely unpredictable.”

Gupta, meanwhile, proudly proclaims himself as Trump’s biggest fan in India and is certain of his victory. He even endorses Trump’s general distaste for migrants. He thinks that Indians studying and working in the US should eventually come back — not settle there — and that India should also not welcome migrants.

But his facts do not seem to be wholly accurate.

“Trump has spoken about banning Muslims, about building a wall along Moscow, Mexico?” said Gupta. “Well, he will build a wall to keep illegal Muslim immigrants out from Mexico. We should do that too with Bangladesh.”