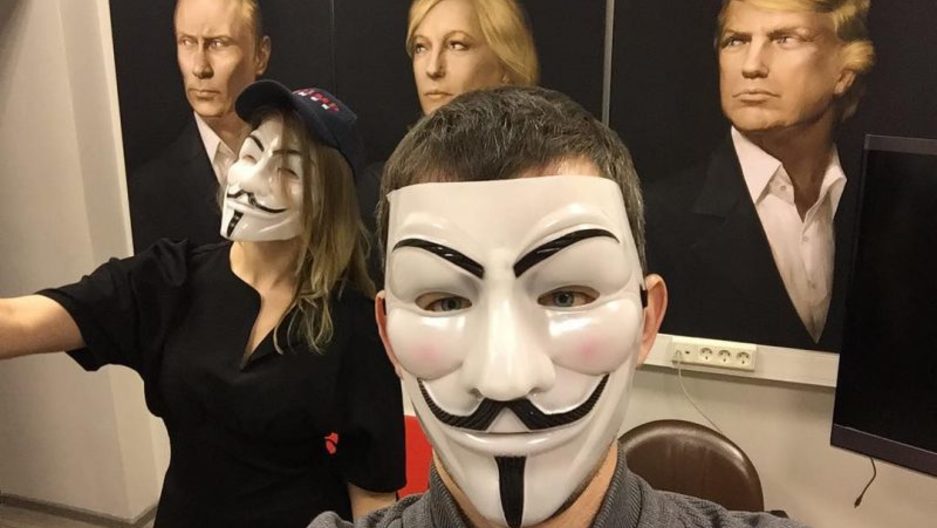 Russian advocate for Donald Trump Maria Katasonova has been promoting an inauguration party hosted by an art collective in Moscow on Instagram. The portraits in the back are of the the “triptych,” Russian president Vladimir Putin, French politician Marine Le Pen and  Donald Trump. The group believes the trio will usher in a new world order.

The Obama era ends on Friday. With just hours to go until Donald Trump takes over as US president, the billionaire’s supporters across America are likely in a celebratory mood, anxiously awaiting the demise of left-wing tyranny, or whatever else it was that prompted millions of people to vote for the Republican candidate last November.

There’s a party scheduled in Moscow, too, but you’ve got to be on the list to attend.

According to the organizers, reporters from several major news outlets have already been accredited to attend the event, including journalists from CNN, BBC, ABC, The Guardian, The New York Times, Newsweek, the Associated Press and others.

In addition to a live feed from Washington, DC, where Trump will take the oath of office on Friday shortly before noon eastern time, the audience in Moscow can expect at least two “presentations” — one about the “political philosophy” of the “triptych” (the art collective’s belief that Russian President Vladimir Putin, Donald Trump and far-right French presidential candidate Marine Le Pen will usher in a new world order), and another by Kirill Benediktov, a science-fiction writer with ties to the LaRouche movement. (Critics call that movement fascist or a political cult.) Benediktov recently wrote a book about Trump called “Black Swan,” where he reviews some of Trump’s past entrepreneurial escapades in Russia.

The most photogenic person expected at the Trump inauguration party is Maria Katasonova, 23, who works as an aide to State Duma deputy Yevgeny Fyodorov, the founder of an ultra-right political movement that claims the Russian Federation exists as a colony of the United States.

Katasonova has appeared in interviews and photographs reprinted by news outlets all over the world, thanks to her tireless and colorful advocacy for Donald Trump. She got another publicity boost last month, when she was photographed at a Kremlin press conference holding up her art collective’s iconic “triptych” portrait of Putin, Le Pen and Trump, side by side.

Last fall, Katasonova even ran for a seat in the State Duma, losing miserably to the incumbent.

Thanks to Trump’s surprising defeat of Hillary Clinton, however, Katasonova has retained some prominence in Moscow’s pro-Kremlin youth sideshow, whose government-connected activists periodically stage events to remind reporters about their existence. Friday and its parade of “triptych” philosophers promises to be the latest reminder.