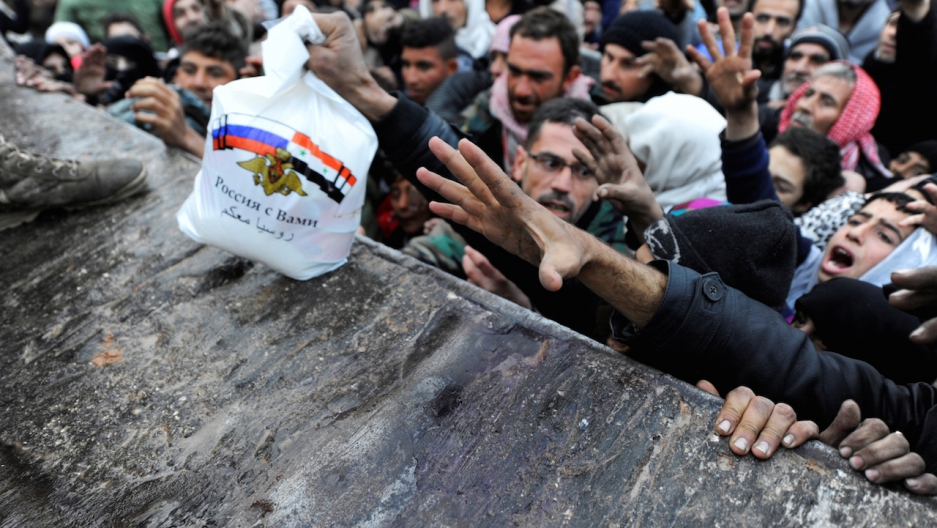 Syrians who have been evacuated from eastern Aleppo reach out for Russian food aid in the government-controlled Jibreen area of the city, Nov. 30, 2016. The text on the bag, which shows the Syrian and Russian national flags, reads in Arabic: "Russia is with you."

Take the war in Syria.

Is President Bashar al-Assad the Syrian dictator who has relentlessly prosecuted a war against his own countrymen, using tools including chemical weapons? In the West, most certainly he is.

In Russia? Not quite.

State media here portrays Assad, whose regime is an ally to Russia, as the embattled leader of a country facing the tyranny of both the Islamic State and Western powers scheming to overthrow its legitimately elected government.

The West presents Russian intervention in the Syrian conflict as a Kremlin gambit to shore up influence in the Middle East — a cynical embrace of Assad's regime in order to break out of international isolation.

But to Russians, the military campaign is a tale of sacrifice and courage in the battle against global terror. New-generation weaponry has largely proven effective, which has allayed many Russians' early fears of a quagmire. Even those who disagree with the mission agree with President Vladimir Putin's initial justification: better to kill terrorists in Syria than to face them at home.

That same split in perception applies to the siege of Aleppo. There's been little if any Russian attention given to the heartbreaking "last messages" from Syrians in east Aleppo.

In place of it, the Russian Defense Ministry's chief spokesman for the war, Igor Konashenkov, dismissed reports of slaughter and suffering in Aleppo as a mirage. This is, of course, demonstrably false.

And yet Russians see their own forces as the true rescuers. The message they've received on television and from other state news is that American insistence of a "moderate Syrian opposition" was always a myth. The official line is that rebel fighters in Aleppo were in fact all terrorists and rightly bombed into oblivion.

Indeed, what is real and what is fake now seems the dominant theme of world politics.

Russian soldiers in Ukraine? The West says they're on the ground actively fighting. Russia says they're merely "volunteers."

Massive state-sponsored doping among Russian athletes? The World Anti-Doping Agency has laid out thousands of documents to make its case. Russia says it's all a conspiracy.

The downing of Malaysia Airlines Flight 17 over eastern Ukraine? An international investigation says a Russian-made missile brought down the plane. Russia complains its own forensic findings are ignored.

As the final hours of the siege of Aleppo wound down, the picture in Russia shifted to grateful Syrians expressing their relief over the end of the siege, munching on Russian cakes and porridge.

They seemed happy. Indeed they looked happy. Until you switched on CNN or the BBC or some other Western news source — where the story was starkly different.

It's for this reason that Samantha Power's public shaming of Russia and Syria at the United Nations falls on deaf ears in Moscow: The story she's telling isn't one that Russians hear.

By any objective standard, the West either gets Russia very, very wrong, or Russia operates in a "post-fact" universe of endless lies and spin. Argue the second, and you'll instantly be accused of "Russophobia."

Which brings us to Donald Trump and charges of Russia meddling to win him the White House. The CIA and Obama administration say they have convincing evidence. Trump says he doesn't buy it. The Kremlin, of course, denies it.

Candidate Trump seemed to see the world through a Kremlin lens. From Russia's annexation of Crimea to its support for Assad and criticism of the NATO alliance, Trump's views come awfully close to official Russian positions.

The nomination of Exxon Mobil CEO Rex Tillerson for Secretary of State was just the latest signal that diplomacy out of Washington under Trump will boil down to the art of the deal. Tillerson is well known to Putin, having received a friendship medal from the Russian leader. Sanctions relief suddenly seems a real possibility for Moscow. Putin is already talking of restarting US-Russian cooperation on global security and in the energy sector.

Until the US presidential elections, we merely lived in parallel information voids. But what happens when post-fact Russia meets Donald Trump's self-professed penchant for "truthful hyperbole"?