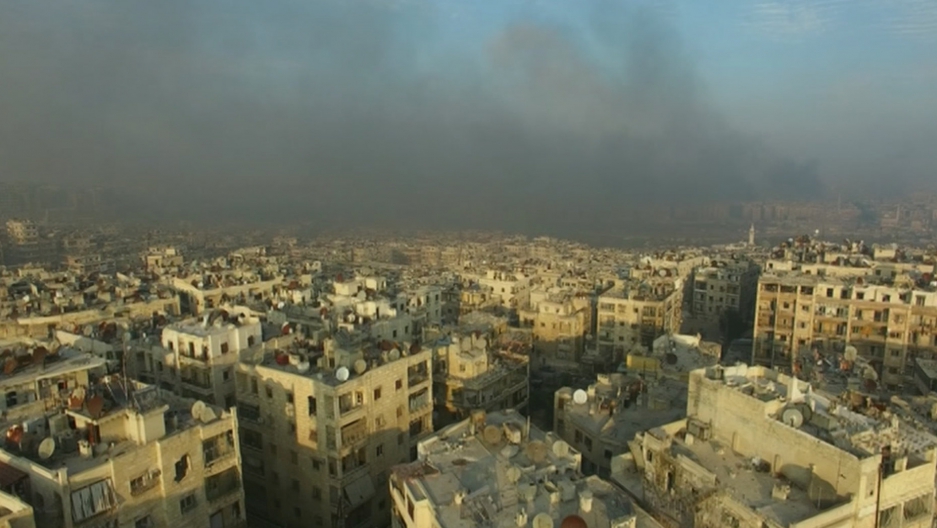 Dozens of people in Aleppo have sent farewell messages on social media this week, expecting to die. Men like teacher Abdul Kafi Alhamdo.

I can tweet now but I might not do it forever. please save my daughter's life and others. this is a call from a father.

Some have reportedly sought religious advice to find out whether it’s OK to kill themselves, and their families, rather than be taken alive by the Syrian government and allied forces. Men expect to be killed. Women expect to be raped. Families are already being broken up.

The United Nations said Monday it has reliable evidence that 82 captives have been summarily shot and killed, including 11 women and 13 children.

The Syrian government and its allies, Russia and Iran, are indiscriminately bombing and shelling the last square mile of eastern Aleppo under rebel control. The area still contains tens of thousands of unarmed civilians. After four years under siege, they say this is the heaviest bombardment they’ve ever seen.

Some people are now using the word "genocide" to describe what's happening in Aleppo.

The US ambassador to the United Nations, Samantha Power, didn't go that far, but on Tuesday she did tweet this:

She's referring to the genocide in Rwanda in 1994, and the massacre of Muslim men and boys in Bosnia in 1995.

Philip Gourevitch of the New Yorker wrote the book on Rwanda, and titled it, "We Wish to Inform You That Tomorrow We Will Be Killed With Our Families: Stories from Rwanda." On Monday, he tweeted this:

people of Aleppo wish to inform you that tomorrow they will be killed with their families https://t.co/ghIBaSQRI8

Gourevitch sees an equivalence between Rwanda and Aleppo in the experience of specific people telling the outside world that they expect imminent death, and appealing for outside help. Which will not come.

However, Gourevitch is clear that he would not use the word genocide to describe what’s happening in Aleppo “because in the strict legal sense — and I think that it matters because it is a specific crime, and not just legally but conceptually — it has to be a systematic project of exterminating a group defined by religion, race, ethnicity and so on.”

“I would describe it,” he says, “as what looks like an indiscriminate and systematic … extermination of the civilian population.”

“Aleppo is clearly basically being wiped out,” he adds. But the victims are defined by location and politics, not ethnicity or religion.

Gourevitch says he's not trying to diminish what's happening in Aleppo by choosing not to call it genocide. “There are tremendous atrocities being committed.”

It's clearly a war crime, in his view, and a crime against humanity — specifically, a crime of extermination. “It’s trying to end a battle within a war by simply exterminating the population in that place.”

But Syria is a complex place. At the same time as they’re under assault, rebels have fired rockets indiscriminately into government-controlled neighborhoods. In some instances, government successes in capturing rebel-held areas have been greeted with dancing in the street, amid hopes of an end to violence in the city.

Gourevitch acknowledges that Aleppo has been a battleground for a long time, but “that doesn’t eliminate the responsibility of the side that’s indiscriminately killing in places that it’s gaining control of.”

“If there’s a policy to massacre, and to torture, and to capture and kill prisoners, often civilians — that is not in any way mitigated by the fact that you have people celebrating on the other side of town.”