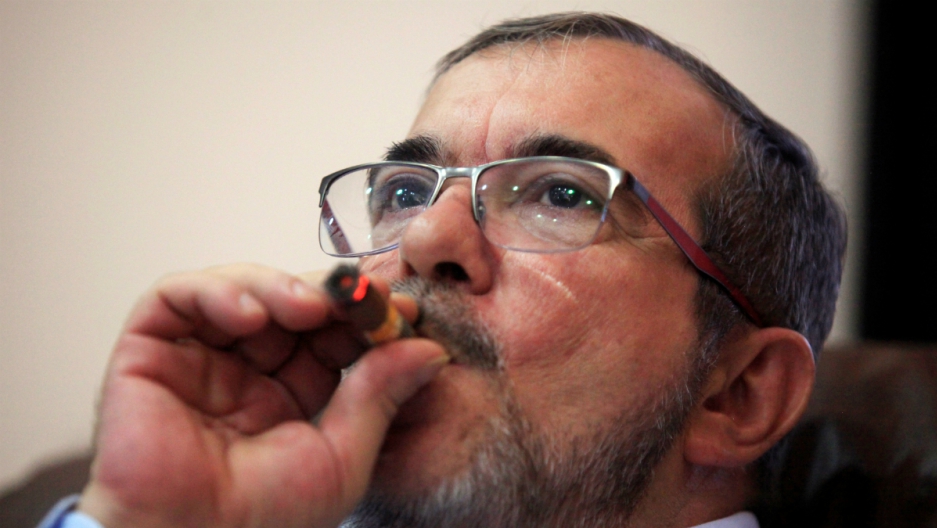 Revolutionary Armed Forces of Colombia (FARC) leader Rodrigo Londono smokes a Cohiba cigar while watching a live transmission of the referendum on a peace deal, in Havana, Cuba

There have been a lot of referendums lately here on planet Earth.

This past weekend, there was a referendum in Hungary about accepting migrants and refugees, and a major vote in Colombia on a deal that would have ended 50 years of armed conflict.

There was also the historic Brexit vote last June, in which UK voters decided to leave the European Union.

Referendums happen when politicians choose to put issues up for a popular vote, rather than just deciding policy by themselves.

Matt Qvortrup, a professor at Coventry University in England and editor of the book "Referendums Around The World," is sort of an expert on how politicians make that choice.

So in some ways, referendums are a bit of a cop-out.

“I think politicians generally turn to referendums when they chicken out a little bit, which is perhaps not very nice to say to them," he adds.

But Qvortrup says the reason there have been so many referendums lately might have more to do with with how society has changed.

“I think we used to live in the age of the package deal. We would go with things that were sort of selected for us. Now, we’ve become much more individual,” says Qvortrup. “In a way, it is a sign of an individualized society and it is also a sign of all the political parties not representing everybody in the way they used to represent them before."

When you vote, he explains, “you put your faith in an individual just the same way as you put your trust in an estate agent or a lawyer or a doctor. A referendum does not do away with the political estate agents or the political lawyers, but it allows you to say to that person, ‘wait a minute you’re not going to sell my house unless I agree to it.’”

Not that referendums don’t have a downside.

In short, Qvortrup says, there is such as thing as too many referendums.