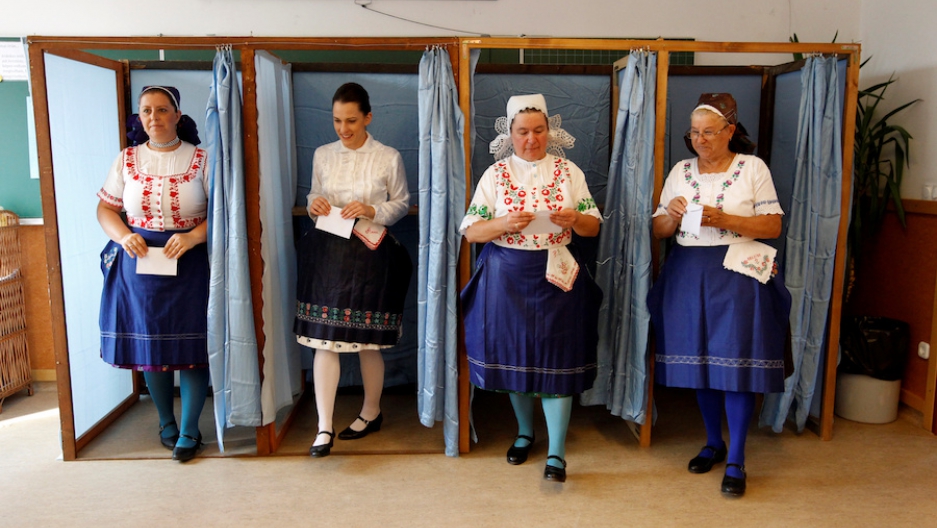 Hungarian women leave voting booths at a polling station during a referendum on European Union migrant quotas in Veresegyhaz, Hungary, on Oct. 2.

A peaceful demonstration brutally suppressed by an authoritarian regime desperate to cling to power. Armed conflict in the streets, and tanks and snipers claiming thousands of civilian lives. Hundreds of thousands of refugees pouring into Europe.

It could be Syria today, but that describes the events that unfolded in Hungary after the 1956 uprising against the Soviet-aligned government.

Yet despite that painful history, Hungarian Prime Minister Viktor Orban felt it necessary to immerse the country in a referendum over refugees fleeing armed conflict.

The referendum asked, “Do you want the European Union to be entitled to prescribe the mandatory settlement of non-Hungarian citizens in Hungary without the consent of parliament?” The result was an overwhelming 98 percent “no.”

Having openly endorsed Donald Trump, Prime Minister Orban has border wall ideas of his own, and the government is hiring "border hunters" to enforce them. Now, he wants Sunday's popular vote to lay the groundwork for others wishing, as he puts it, to protect "Christian" Europe from Muslim migrants.

But here's one problem with his referendum victory: Little more than 40 percent of Hungary’s 8 million-strong electorate actually voted — missing the 50 percent turnout needed to be valid under Hungarian law. And some who voted even decided to spoil their ballot in protest.

Take Terezia Feldmar, a 64-year-old teacher. Outside a polling station in the capital, Budapest, in the hilly residential area of Buda, she explained that she disagrees with both the government and the referendum on principle.

“I voted for ‘yes’ and ‘no’ at the same time — so I gave an invalid vote because the question itself doesn’t make any sense. If I vote ‘yes,’ I contribute to the chance of the whole referendum being valid, and I don’t want that,” she said.

“I hope others do the same. We don’t want to have this bad reputation around the world. We used to be proud of ourselves.”

Feldmar was one of the 4-5 percent who invalidated their ballots. Although mainstream opposition parties were also boycotting the referendum, the dissent can be linked largely to a more esoteric political force.

During the 2006 elections, Gergely Kovacs, 36, was running a joke campaign promising voters free beer, eternal life and sea access to landlocked Hungary. This year, his liberal activist group the Two-Tailed Dog Party gained global notoriety for their satirical subversion of state-sponsored propaganda that featured alarmist and spurious claims linking refugees with terrorism and attacks against women.

One of the government's referendum campaign messages says: “Did you know the Paris attacks were committed by immigrants?”

Another reads: “Did you know that Brussels wants to settle a city’s worth of migrants in Hungary?”

Kovacs’ wry group counters those with their own wry claims.

“Did you know, that a tree could fall on your head?”

“Did you know, that if you repeat something a lot, it will seem right?”

Kovacs insists a big effort was needed to change the narrative away from the government’s stridently xenophobic invective, which, by some estimates, cost $40 million in public funds.

“It is important to react to this as the government is bringing the evil out of the people, so millions of Hungarians spend their days hating refugees that are not even here. Hungarians are not racist: our government is racist,” Kovacs said. “If any government in the world spent the same amount of money on this kind of campaign, people would start to believe the message.”

This year hundreds of thousands of asylum seekers have arrived in Italy and Greece, and many of them remain stuck there.

But the Orban administration insists the EU doesn't get to obligate countries to take them.

While Hungary's referendum turnout failed to meet the 50 percent threshold, it was never actually legally binding. Orban is claiming that it was a "political" exercise, rather than a legal one. He says can amend the constitution to ensure that asylum matters are in the national purview.

The square outside Budapest’s Gothic parliament building has been a venue for Hungary’s extremes. On Saturday afternoon, the far-right Jobbik party hosted a rock concert where headbanging skinheads could be seen giving Nazi salutes. On Sunday, a rally by the green liberal party Dialogue for Hungary pumped out Wham! songs to the crowd as they waited for members to assemble. One of the Dialogue speakers, Reverend Balazs Szucs, feared that the vitriolic referendum campaign risked rehashing dark chapters of Hungary’s World War II past.

“We are playing with fire here. I think Hungarian society has been hurt and wounded a lot by this campaign. We have these historical memories of when hate and fear killed hundreds of thousands of Hungarian people,” he told PRI.

On Sunday evening, members of the ruling Fidesz party clinked wine glasses and held a victory rally for a democratic exercise that failed to entice half of the electorate.

Zoltan Kovacs, chief spokesman for Prime Minister Orban, tried to put a positive spin on the low turnout. “The most important thing is that this is the most democratic form of expressing opinion of the electorate, and the most important result is always the clarity of the message,” he said. “Should it be possible for any institution to go around the Hungarian parliament and decide about with whom should we live together in this country?”

Back in 1956, Hungarians were the subject of an unprecedented global resettlement program — refugees from Hungary were transported by trains, planes and boats to 37 countries. Spokesman Kovacs sniffed at the suggestion that there’s a historical poignancy in his government holding an anti-refugee campaign now.

“Well, the comparison with the '56 revolution shows a lack of knowledge of history, an ignorance of history. This is a completely different story. At that time, Europe was divided,” he replied.

“Right … but we are not doing this to divide Europe. We would like to unite Europe and defend Europe in the face of a challenge.”

Orban hopes his political gamble unleashes a “tsunami of referendums” across the continent against the EU’s refugee policies. But critics inside and outside Hungary would say the real challenge facing Europe is from governments like his own.