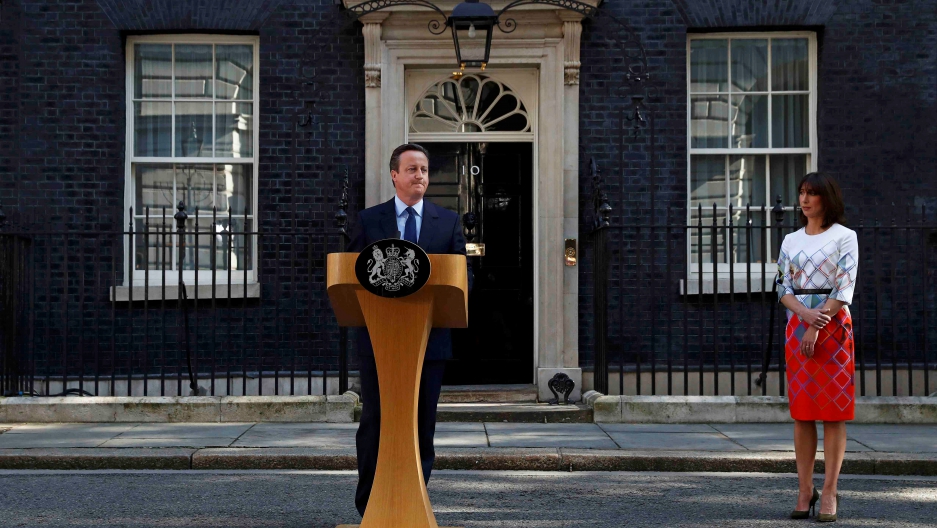 Britain's Prime Minister David Cameron speaks after Britain voted to leave the European Union, as his wife Samantha watches. Cameron said he will step down in the fall.

It’s the first time a country has withdrawn from the European Union, and what happens next for both the EU and the UK is far from clear.

British Prime Minister David Cameron told reporters Friday morning that he would step down this fall, having based his mandate to lead on staying in the EU.

It will be up to Cameron’s successor to officially secede from the union by invoking something called Article 50 from the EU treaty.

What happens after Brexit

Ian Wishart explains how the European Union might treat the UK after its secession.

Read the story on Bloomberg.com.

After that, the UK will technically have two years to negotiate its future relationship with the rest of Europe.

“These EU laws have been built up since the 1950s, and slowly but surely, many, many aspects of legislation in the UK has been replaced by EU law,” says Bloomberg reporter Ian Wishart. “Not only EU law, but also every trading agreement. All of that would have to be replaced by UK trade deals.”

“These sorts of things take such a long time,” Wishart says.

Wishart says there are two main schools of thought within the EU about how kindly to treat the UK during negotiations defining the conditions of their split.

One bloc, led by the French, Spanish and Italians, won’t want to grant the UK a favorable secession agreement.

“More than anything else, because [they] don’t want to encourage anyone else to do the same,” Wishart said.

The second camp, led by Germany and other northern European nations, will prioritize protecting their own lucrative trade relationships with the UK.

“It’s not in [their] interest to make life difficult for them,” Wishart said.

Living and working across borders an open question

The pro-Brexit camp before the referendum said it wouldn’t kick out EU residents already living there, Wishart said, and the same would likely be true for UK residents living on the continent.

But, Wishart said, “it’s all up in the air, nobody has any idea really what this is going to look like in a couple year’s time.”

How the free movement of citizens across borders is impacted by the Brexit will depend on the new relationship between the UK and the rest of the continent.

In his article for Bloomberg, Wishart and colleague Matthew Campbell wrote there are three general ways the UK-EU relationship could shake out.

Wishart said even with the Brexit vote over, the divisions within the UK are still tangible and are likely to resonate for a long time.