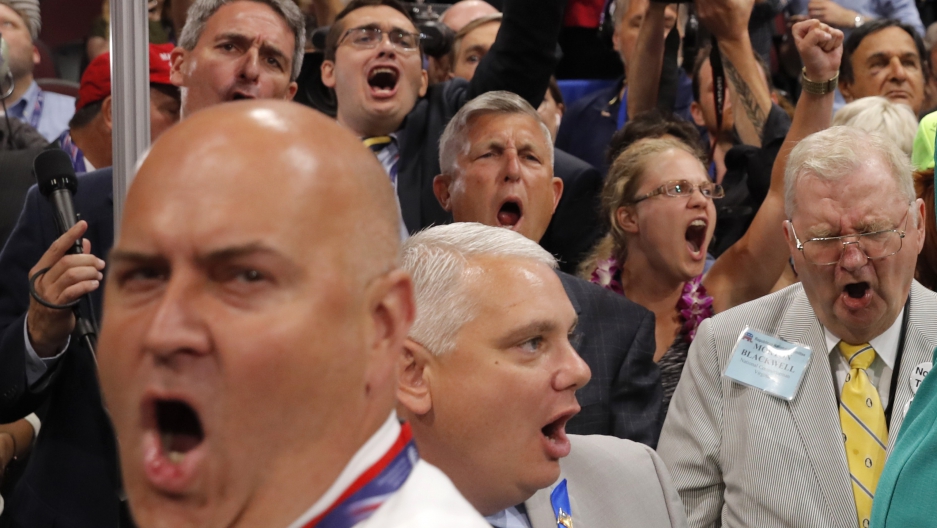 One of the strongest themes in Republican presidential nominee Donald Trump's address in Cleveland last night was this: Be afraid.

"Our convention occurs at a moment of crisis for our nation," he said in his opening lines. "The attacks on our police, and the terrorism in our cities, threaten our very way of life. Any politician who does not grasp this danger is not fit to lead our country.

"Americans watching this address tonight have seen the recent images of violence in our streets and the chaos in our communities." He then vowed that this violence would end if he were elected. "Beginning on January 20th 2017, safety will be restored."

But who or what should we be afraid of? Many people, it turns out, were afraid of the candidate himself.

For Luis Marentes, a professor in Massachusetts, Trump's rhetoric is cause for worry. The speech, he said in our discussion group, the Global Nation Exchange on Facebook, had an "entire overwhelming pushing of fear." Trump gives the false impression that migrants "are crossing en masse with the purpose of brutally killing Americans and dealing drugs. ... Not only [do] they roam free, but they do it armed and with the intention to murder."

While there have certainly been cases of undocumented people committing violent crimes, including those discussed in Cleveland this week, the story is a bit more complicated than what Trump presented. Immigrants, in the US with or without visas or green cards, have a lower rate of crime than the general public. And those undocumented people who do have criminal records have most often committed minor crimes — such as marijuana possession or not having a drivers' license — rather than violent offenses.

From 2009 to 2014, between 350,000 and over 400,000 people have been deported each year. Last year, according to Immigration and Customs Enforcement, 235,000 people were "removed or returned" — and those with criminal records are considered the highest priority.

Isolda Ortega-Bustamante gave her first reaction to the speech on Facebook: "Fear. Fear the Mexicans. Fear the Muslims. Fear the Chinese. Fear crime."

Generally, Trump decried what he claimed is an increase in violent crime. His exact statistics about homicides in certain cities were correct, but not indicative of a trend. Here's a concise analysis of Trump's claims on this issue by Seema Mehta at the Los Angeles Times.

Trump also doubled down on his commitment to build a wall: "We are going to build a great border wall to stop illegal immigration, to stop the gangs and the violence and to stop the drugs from pouring into our communities."

He presented US policies on refugees as a security concern. "I only want to admit individuals into our country who will support our values and love our people. Anyone who endorses violence, hatred or oppression is not welcome in our country and never ever will be," he said.

His comments are indicative of a debate that's happening across the country — take this recent case in Montana, for example — but one that often misses the realities of our existing screening process. It can take years for a Syrian refugee to be allowed to set foot on American soil and it is an extremely difficult process.

For many immigrants and the families of immigrants watching the convention, the tone and content of the speech was cause for worry.

"I would say his fear mongering and the crowd's excitement were really worrisome," says Marentes. "The enthusiasm with which they cheered the discourse of 'law and order,' 'security,' etc. As [scholar and activist] Rosa Clemente tweeted, it looked like a lynch mob."

Whether Trump wins or loses, some say that they are feeling a change since his campaign began.

Marcelle Hutchins, who has contributed to Global Nation and PRI's The World, wrote: "I'm definitely seeing things change for the worse. I've lived in Boston for four years and for the first time this year I was told that 'Black Lives Don't Matter' from complete strangers. I have an idea where this all stems from. His speech encouraged his followers and non-followers to be afraid. He told them the nation was in 'crisis,' that there is 'violence in our streets' and 'chaos in our communities.' I don’t think he realizes that the fear he’s using as a winning campaign strategy is making things worse."

What do you think? Our conversation on the campaign for the presidency, immigration and what "Americanism" means continues in the Global Nation Exchange.