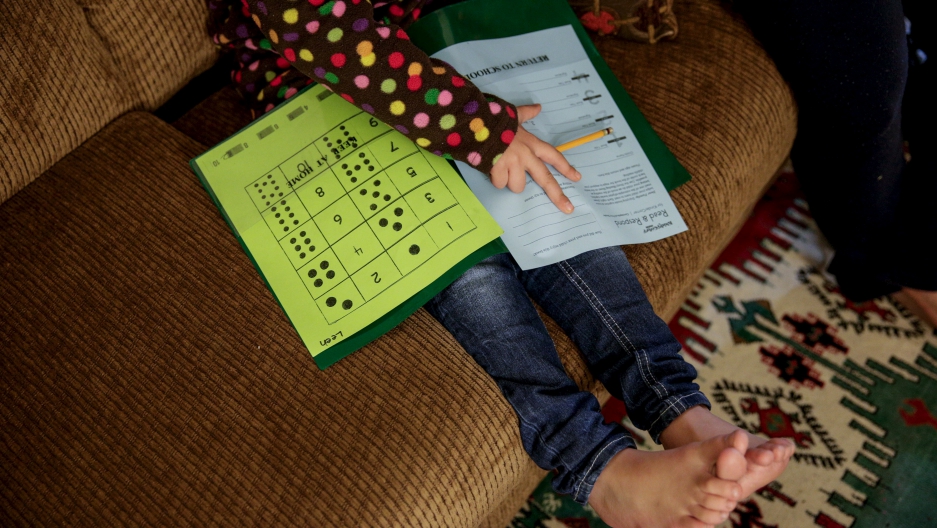 Five-year-old Syrian refugee Leen works on her homework at her new home in Sacramento, California. Leen and her family fled violence in Syria three and a half years ago and arrived in Sacramento in September 2015 after living in Jordan. Her face is excluded from the photo to protect her identity.
Credit:

The craven murders committed by ISIS militants in Paris last Friday have prompted some Americans (including surprise, a number of politicians) to think again about admitting any more Syrian refugees.

For presidential candidate Donald Trump, it's the Trojan Horse argument: An ISIS militant could sneak in and wreak the same kind of terror on Americans. But here's a pretty sobering reality check: Of the 4 million Syrians who have fled their country since 2011, only some 2,000 have been admitted to the United States as refugees.

"It's really a drop in the bucket." says Max Rosenthal, who wrote about the US government refugee vetting process for Mother Jones. "Lebanon is a country of 4 million people."

The United Nations High Commissioner for Refugees estimates that there's 1 million refugees in Lebanon. "That'a a conservative estimate," says Rosenthal. "So you're talking about well over a quarter of the population of Lebanon is now made up of refugees, mostly from Syria."

There are millions more in Jordan, Turkey, and Iraq. In Europe, Germany alone expects to have close to a million Syrian refugees by the end of 2015. "There are thousands of people coming into Europe everyday. So it's just a dramatically different situation."

What about the vetting process, critics ask. How does the US government determine whether a Syrian refugee will not be a security risk?

"It's a long process. It takes a minimum of 18 months. Some cases go up to even three years."

Rosenthal says it starts with refugees applying for refugee status. "They make contact and they send in an application to the United States. UNHCR helps identify which candidates might be good for resettlement in the United States."

Often that has to do with whether or not the refugee applicant has family members already in the US. Then the application goes to the Department of Homeland Security.

"They have a group called The Refugee Corps that goes out and interviews these refugees wherever they are, whether it's Turkey, Jordan, Lebanon," says Rosenthal. "They go through a really long screening process trying to verify the stories that these refugees are tellling them, trying to make sure that their identities are what they say they are, trying to make sure that there's not a security threat and that they have no known connections to any terrorist groups or anybody who's really going to affect the security of the United States."

Rosenthal says there's even a 'gut feeling' litmus test. "Even if the refugee applicant makes it through all those security checks and their details line up, if there's something that strikes the security officer the wrong way, they have the discretion to say no to those refugees."

And all of this takes place outside the United States. Refugee applicants from Syria are vetted in the Middle East.

"They're not taking people who have made their way to Europe. So much of the focus has been on refugees that go to Europe but don't forget that the overwhelming majority of refugees are still kind of trapped without resources in the Middle East and those are the people the United States are talking to, people in Turkey, people in Jordan."

"Essentially when a person delivers their application to the US Refugee admissions program, the Department of Homeland Security and other intelligence and security agencies take that information and go through it before the applicant's in-person interview.  So that way when the security officer goes to interview them, they have this file that says what the guy says, what their family says, and examined what their claims are."

They then deliver to the interviewer a set of specific, focused questions to make the vetting more in depth. "That's something that only Syrians are going through because of security concerns since the start of Syria's civil war."