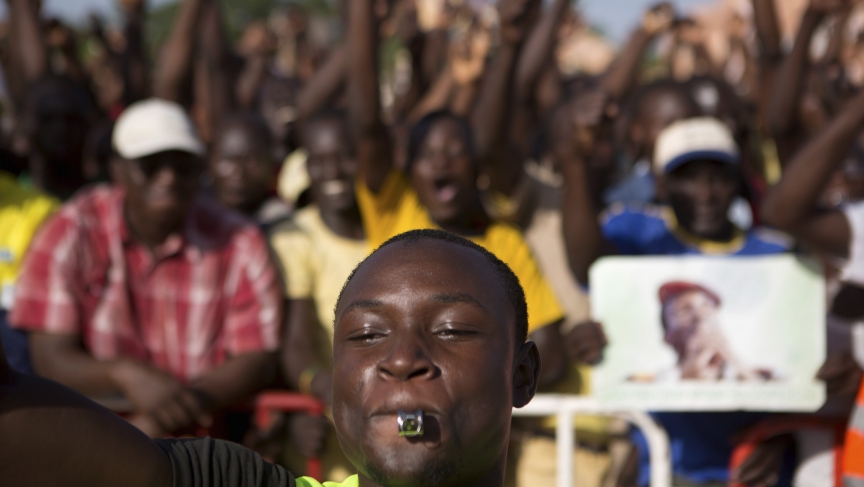 Protesters chant slogans at Place de la Nation in Ouagadougou, capital of Burkina Faso, on October 28, 2014. Police fired tear gas at rock-throwing protesters after tens of thousands of people marched through the city on Tuesday morning.

The current constitution allows the president to run for only two terms. But that constitution has been amended three times — in 1997, 2000 and 2002 — since it was approved in 1991. Those amendments have allowed Compaoré to remain in power for 27 years.

The latest revision would reduce the current seven-year term to five years. That would reset the clock to zero, so to speak, and allow Compaoré to run three more times for potentially an additional 15 years in office. The proposal will go to a referendum this week unless parliament passes it by a three-quarters majority, which would automatically approve the change without a popular vote.

Tens of thousands of people marched through the capital on Tuesday, chanting against the proposal and demanding that Compaoré step down. The demonstrations were mostly peaceful, though a few protesters toppled a statue of the president in the city of Bobo Dioulasso. Police in Ouagadogou also used tear gas against protesters.

The leader of the opposition, Zephirin Diabre, is one of the leading organizers of the protests:

The protests were widely documented and followed on Twitter via the hashtags #burkina, #bf226 and #iwili. Mossi Dramame, from the capital, posted a few images:

People of Burkina, Africa is with you. Compaoré out ! #Burkina

Here is a snapshot of the huge crowds on Tuesday morning:

Even if they understand the reason for the protests, some Burkinabe, as residents of Burkina Faso are called, are unsure that civil disobedience is the right way to go about it. Yaya Boudani captured that view from Ouagadougou for the French-language site All Africa:

We must choose means within the rules of the law to settle this issue between the government and the opposition. There is no other way because going the illegal way will polarize the nation. The country may enter a period of crisis that nobody can control.

Residents of neighboring countries are anxiously observing the protests. President Compaoré played a pivotal role in mediating a political crisis in Ivory Coast in 2010, leading a mediation task force that tried to halt violence between supporters of rival presidential candidates who both claimed victory in that year's election.

A member of the Ivorian government, Alain Lobognon, weighed in with a skeptical note on Twitter:

Any political system is defined by its objectives and its context. China is an exception when it comes to democracy. Why can't Burkina Faso follow the same path?

Observers are afraid that violence might soon escalate. Reports on News Ouaga show that protests are becoming more contentious:

After relatively peaceful protests last week in Ouagadougou, groups of “50 to 300″ individuals attacked members of the parliament at their homes on Sunday, accusing them of being “corrupt” and “traitors to the nation."

This story by Lova Rakotomalala was originally published by our partner Global Voices Online, a community of bloggers from around the world.