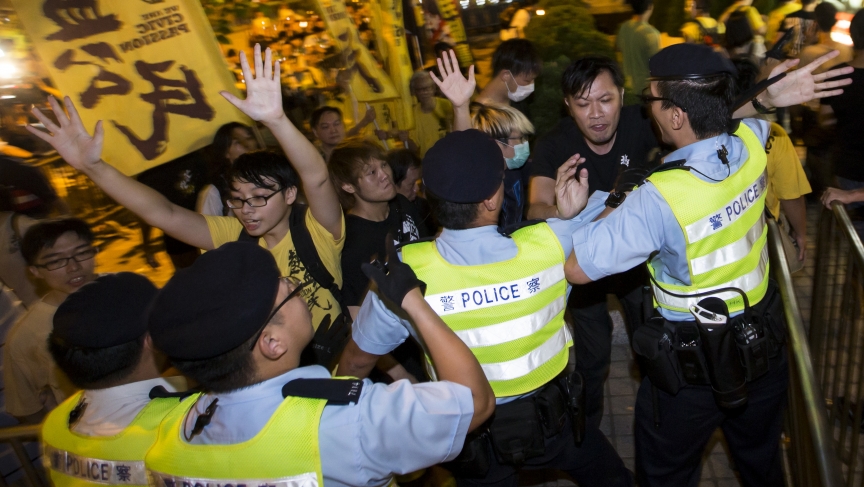 Pro-democracy activists clash with the police during a protest outside the hotel where China's National People's Congress Standing Committee Deputy General Secretary Li Fei is staying in Hong Kong on September 1, 2014.
Credit:

For pro-democracy activists in Hong Kong, China's promise to let the people have a say in the election of the city's next top leader is looking hollow.

This summer, hundreds of thousands of Hong Kongers took part in an informal referendum demanding the right to directly elect the city's chief executive during the next election, in 2017. But on Sunday, the leadership of the National People's Representative Conference, China's parliament, rejected that demand.

China promised Hong Kong, a former British colony that enjoys a certain level of autonomy from the mainland, a direct vote in 2017 instead of election via the current 1,200-member selection committee. But the announcement from the NPC's Standing Committee said that candidates in 2017 would need to obtain at least 50 percent support from a nominating committee.

That nominating committee will be formed in the same way as the committee that currently selects the chief executive — meaning the majority of the members will be pro-Beijing. And pro-democracy activists say having only pro-Beijing candidates defeats the purpose of an election altogether.

The NPC, which met for a week in the mainland capital, also ruled the number of candidates would be restricted to two or three.

In response to the decree, a protest group named Occupy Central with Love and Peace organized a public assembly outside the Hong Kong government building attended by hundreds of people. The group also said it would hold a massive sit-in in Hong Kong's financial district if Hong Kongers aren't allowed to choose the candidates.

The group said in a press release that the NPC's decision dashed people’s hopes for change and will intensify societal conflicts:

What remains in the system is authoritative power; there is no space for reasoning. We urge all Hong Kong citizens to stand up and speak out. The fact that they refuse to hear us does not mean that we don't exist.

The act of civil disobedience is about to take place and it won’t end as a single action. The suppressive ruler has to confront an era of massive public disobedience.

Please call upon citizens who belong to this era to the assembly and have them bring any material that can make a sound, ring the warming siren throughout the city; declare battle.

The wind has blown. We have to continue down our path with courage.

More than 500 OPLC members were arrested earlier this summer at a rehearsal sit-in. That followed a large rally on July 1, a day that traditionally sees pro-democracy demonstrations.

As students’ summer break ends the first week of September in Hong Kong, the Federation of University Student Unions called for a student strike when the new semester started:

[...] For students, boycotting classes is our act of disobedience.

We study in the university to improve our lives and society. Yet, our living space has been shrinking and our society is sick. The collusion of government and corporations, in particular in the property development sector, is destructive to our society. We can’t change our fate by focusing on our study. What we need now is to suspend our daily routine and learn from our society. We have to ask ourselves, what do we want for our society and then act together with those who care to realize our dream.

[...] If you don’t want to see our future being determined by the privileged ruling class, we have to step out and join citizens’ disobedience — resistance to paying tax, boycott of classes, workers’ strike, market strike. We have to turn a new page for our struggle.

Beijing's framework for the 2017 election leaves almost no room for further negotiation, so pro-democracy legislators will likely exercise their veto power in Hong Kong's legislative council instead. The Hong Kong government will consider an official draft on the arrangement of the 2016 legislative council elections and the 2017 election of the chief executive early next year.

Meanwhile, to explain to Hong Kongers why it matters to vote down “fake” universal suffrage, a group calling themselves Fluid Occupiers have begun offering rotten oranges to passersby in the city. The political demonstration spoofs a government advertisement asking Hong Kong's people “to accept whatever is available.”