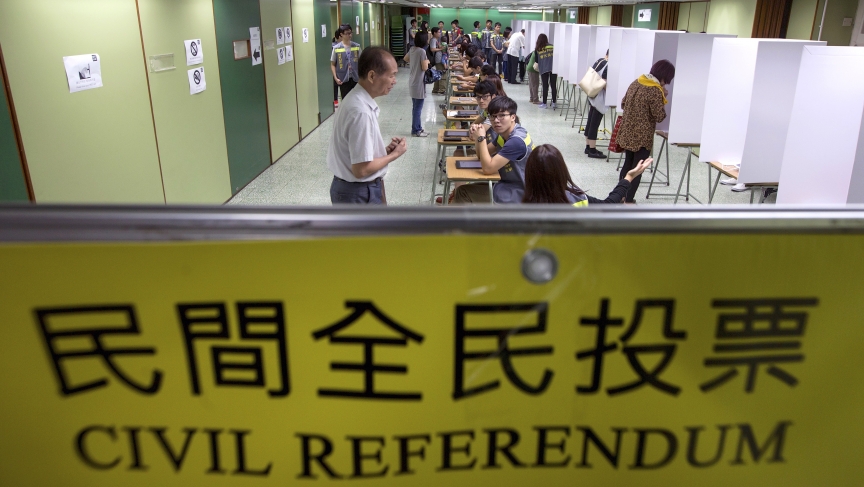 Voters are guided inside a polling station during a civil referendum held by a group in Hong Kong called “Occupy Central with Love and Peace.” The unofficial referendum sparked warnings from China's Communist Party leaders.

In a strictly legal sense, the vote going on in Hong Kong right now is meaningless. But Beijing is taking serious issue with the political implications of Hong Kong's latest experiment in democracy.

By mid-week, more than 700,000 people — about a fifth of the electorate in Hong Kong — had cast their votes in a referendum on how the Chinese territory should choose its top politician in the future. And there is the rub. China's central government insists that the Communist leadership in Beijing retains the ultimate say over who governs the former British colony.

But no such option is included in this civil referendum, which is being held online and at Hong Kong polling stations. All three choices on the ballot would cut Beijing out of the process. If implemented, any of the three would give Hong Kongers the right to pick their own 'chief executive', as the position is known.

The voting began on June 20. It was extended through the end of the month. And the level of participation far exceeded expectations of the organizers. They are from a pro-democracy group called “Occupy Central With Love and Peace.” The name might have a goofy ring to it. But the group is serious. It is threatening to put thousands of demonstrators on the streets and bring Hong Kong's business district to a halt if China fails to take heed of the referendum's results.

The unofficial vote has sparked a steady stream of pushback. It was hit by cyberattacks right away. Chinese officials say the vote is “illegal and invalid.” Pro-Beijing newspapers in Hong Kong have dismissed the process as farcical. Pro-Beijing politicians in the territory worry the vote needlessly provokes China and could hurt Hong Kong businesses.

The stridently nationalist Global Times from the Chinese mainland has claimed the referendum is aimed at stirring up “trouble for China” and that the true “black hand” behind it is none other than the United States.

In an editorial published on June 23 in both English and Chinese, the Global Times called the vote in Hong Kong “laughable.” The article goes on to say that, "on the core question of Hong Kong governmental reform, 1.3 billion Chinese have equal right to speak." To some, the sentiment came off like an unconscious endorsement of democratic principles from a state-run mouthpiece, and it brought a wave of criticism in China's lively social media universe.

“Those who are choosing to speak out,” says David Wertime, senior editor at Foreign Policy, “are, in many cases, poking fun at Beijing. Or, at the very least, poking fun at the Global Times' approach.”

Wertime highlighted examples of that criticism in a recent article, including one microblog user from the mainland who wrote sarcastically, "I have thousands of tanks, hundreds of thousands of special police, millions of soldiers, and 80 million disciples. But I am still afraid to let people vote."

“There certainly are defenders [of the central government's Hong Kong policy]” that Wertime found in Chinese social media. But he added that, “there is always suspicion as to whether those voice are actually real or are members of the so-called '50-cent Party', which means they're paid by the government to espouse pro-government views.”

When Britain handed Hong Kong back to China in 1997, the idea was that Beijing would allow voters to choose their chief executive by universal suffrage starting in 2017. But until now, China has shown no inclination to give up its control over the process of nominating the candidates who make it onto the ballot.

Earlier this month, China issued an official document reaffirming its complete political control over Hong Kong. “In other words, Beijing gets first cut,” Wertime says. “In deciding who the candidates [for chief executive in Hong Kong] are. They have to 'love China' and 'love Hong Kong.'”

“If that means Beijing gets to pre-approve the candidates, then the ensuing election — even if it were through universal suffrage — would not be much of an election at all. And that what's this debate is about.”