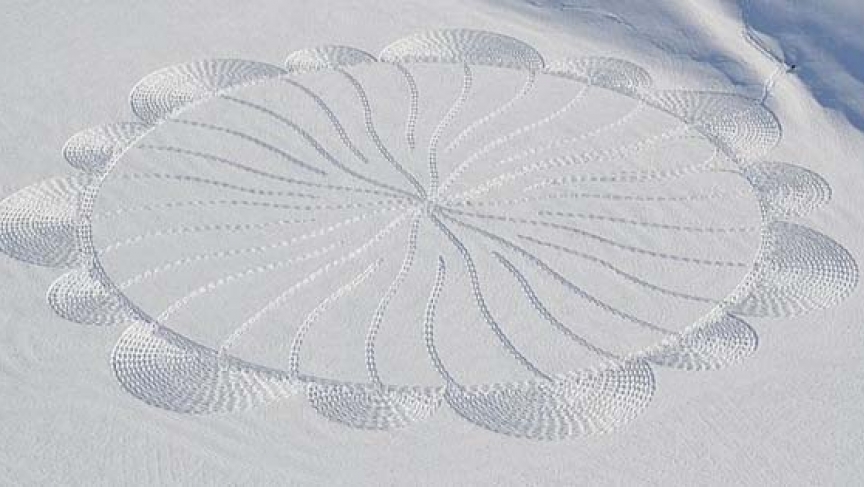 British artist Simon Beck walks his talk ... or at least his art. With snowshoes on, he creates these intricate designs in a day, sometimes walking in circles for several miles.

ViralNova.com has photos of Beck's creations and marvels at the work he puts into art that may be covered or blown away in a day. You can also learn more about how Beck works on the Facebook page for his snow art.

BBC Television gave Edward Snowden one and a half minutes of valuable airtime today on its domestic Channel 4. The broadcaster described it as "an alternative to the Queen's traditional Christmas message."

Snowden said a child born today will "never know what it means to have a private moment to themselves, an unrecorded, unanalysed thought." And he urged people to fight against mass government surveillance, mentioning George Orwell's book 1984. Snowden recorded the message in Russia, where he has temporary asylum.

War Hero and father of computing Alan Turing gets a pardon

Also from Britain, a wrong finally gets righted. Queen Elizabeth II granted Alan Turing a pardon on Christmas Eve. But why, you may be wondering? You'd think the mathematician who cracked the German Enigma Code and most likely saved Britain in World War II, among other accomplishments, would be getting praise, not a pardon.

But Turing was a homosexual in a country where it was then a crime. He was convicted of homosexual acts in 1952. His punishment was "chemical castration" with estrogen. He died two years later at age 41, in what was deemed a suicide. PRI's The World tells the story of the man considered the father of computer science and artifical intelligence, and recounts the battle by supporters to gain his pardon.

Pakistan was hugely successful when it started promoting compressed natural gas as the fuel of the future in the 1990s. Now, 80% of the country's autos run on the alternative to gasoline. Natural gas was cleaner and cheaper, and would reduce Pakistan's reliance on foreign oil. Air pollution was significantly reduced.

But The Guardian reports that Pakistan is running out of the fuel. The 2.8 million drivers that depend on it face rationing, abandoned natural gas stations, and a possible end to government subsidies.

Around the world, Christmas isn't just for Christians

In a church in Jerusalem's Old City, the pews for Midnight Mass fill early ... with Jews. PRI's The World explains that some come for the pagentry, some to honor and experience other faiths, and some to sing "Silent Night."

But none of those reasons explains why Turkey — with 99.8% of its population officially Muslim — has Christmas decorations and Santas in its malls. It turns out that even many Turks don't quite understand what it all means, but PRI's The World reports it sure is good for the economy.

This pic from the Press Trust of India of children on their way to participate in Christmas celebrations in Patiala pic.twitter.com/q7ts4p5cIN

Up to half a million Canadians and Americans are facing a Christmas Day without power after weekend storms brought ice, snow and freezing temperatures to the midwest and northeast. The Guardian reports that two dozen deaths have been linked to the storm, mainly from traffic accidents and carbon monoxide poisoning as people used heaters and generators indoors to get power. The locations most affected are Michigan, Maine, Quebec, Ontario and New Brunswick. Yesterday, one father in Michigan reassured his kids that "Santa runs on reindeer power, not electricity, so he should be OK." More snow and cold are forecast for that region today.