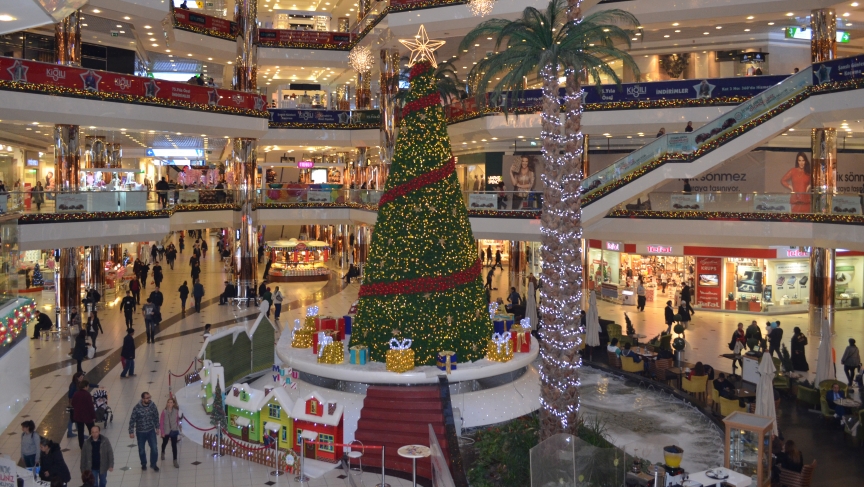 A massive evergreen tree towers over the atrium in one of Istanbul’s largest malls.

It’s that time of year again. The mall is festooned with lights, wreaths and ornaments. What looks like a giant evergreen tree towers over the atrium. In one store, there’s even Christmas music.

The thing is, I’m not back home in Virginia. I’m in Istanbul, Turkey — a country that is officially 99.8% Muslim. It’s not a place where most people actually celebrate Christmas.

“The decorations are gorgeous!” Esma says. “I love that they do this for New Year’s and we exchange gifts on New Year’s — I think that’s very nice.”

If you notice, she says this is all for "New Year's." That would be the trees with ornaments, the reindeer bedecked with lights, the very Christmas-like tchotchkes in the shops ... and Santa.

“To be honest with you, as I was growing up, I was not aware of the Christmas concept at all,” Zeynep Akialp confessed. But she’s aware of it now. She’ an Istanbul native with a luscious fake tree in her living room decorated with colorful ornaments, white lights and tinsel.

“What’s happening in the malls is only for economy, to get the economy going,” she said. “They’re just combining this season with sales this year, if you realize it, it’s huge sales everywhere, and it wasn’t like this before.”

But it’s not as if Santa Claus is entirely unknown in Turkey. He’s called Noel Baba, kind of like “Father Christmas.” And Saint Nick was a real guy — a Greek saint — from Lycia in southern Turkey.

But not everyone is happy about the rising popularity of Santa. Just this week, an Istanbul municipality announced it was banning Santa from the neighborhood. And there’s a call for Muslim youth to protest against Christmas and Santa.

For some Turkish kids though, that particular debate is irrelevant, or so say Zeynep and her daughter Selin, who’s 6.

“They somehow know the real Santa is parents with wallets,” Zeynep told me as she eyed Selin. “Uh huh!” Selin confirmed. “Santa isn’t real!” she announced.

Real or not, Santa is good for business, in Turkey as everywhere else.