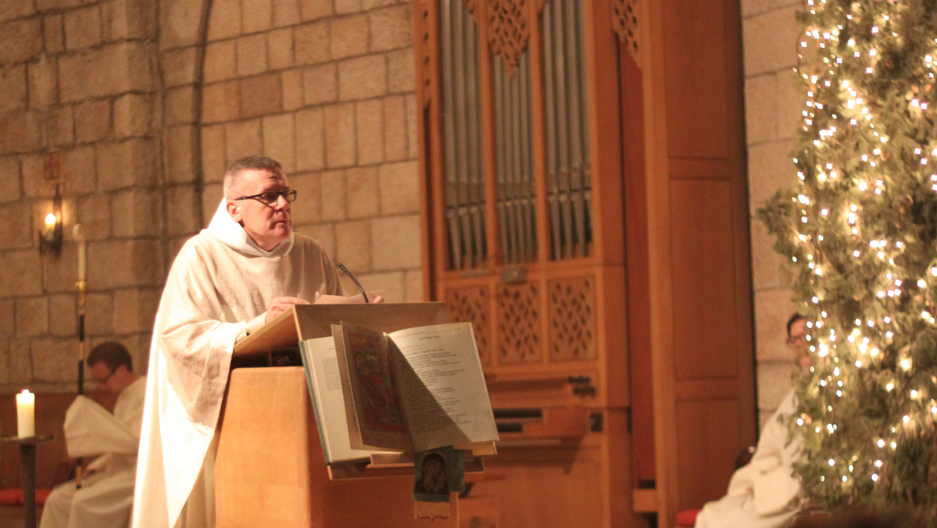 Father Gregory Collins, Abbot of the Dormition Abbey in Jerusalem, addresses the Jewish audience in his Christmas sermon.

On Christmas Eve, thousands of Christians from around the world flocked to Bethlehem to celebrate at the traditional birthplace of Jesus. But a few miles up the road at a church in Jerusalem, something unexpected took place at Midnight Mass: the church became crowded with Jews.

Some might joke that there are more Jews in Jerusalem who attend Midnight Mass on Christmas Eve than synagogue on the Jewish holidays, but there’s some truth to it.

Throngs of Israeli Jews clamored at the gate of the Dormition Abbey about an hour and a half early to get a good seat at Midnight Mass. Seats were snatched up the moment the doors opened, and Israelis sat cross-legged on every available inch of the mosaic floor.

They were there not as believers, but as voyeurs.

“It’s a nice show,” said one dreadlocked Israeli university student in attendance. “It’s a good choreography, you know. I can appreciate a good show.”

“We’re here to share the happiness of different holidays than ours,” another student said. “It’s also just fun.”

Hundreds of Israelis were in attendance, many of them university students wearing dreads and piercings and funky gold leggings. One said he was attending for an ethnographic study — an assignment for anthropology class.

Liel Magen, who works at an intercultural center up the alleyway from the church, said he goes to all kinds of religious celebrations in Jerusalem.

“I think it’s important to be tolerant and interested in other religions, especially those that live among us as neighbors,” Magen said. “I don’t think we need to be separate. The beauty of this city is that we can celebrate all year long.”

Toward the front row, Sebastian Köckler, a Catholic tourist from Cologne, Germany, and his companion were a bit agitated.

“We hope it gets not as loud as now,” said Köckler. “It’s Christ’s birthday. For us, it’s one of the most important days in the year.”

Israelis aren’t known to be the most demure, quiet people, even in synagogue. But amazingly, it did quiet down.

The organ belted out its majestic chords, and a monk delivered greetings in Hebrew.

Tonight, he said, we celebrate the birth of a Jew who lived in this land about 2000 years ago. We are honored tonight to host the people of Yeshua, the Hebrew name for Jesus.

We’ve waited for you all year long, he said.

The Jewish crowd at Midnight Mass presents a delicate challenge.

Father Gregory, the abbot, said he has a strong awareness of the fact that those who attend are the people of Israel, or what he calls the original people of God.

But he is careful not to proselytize. Israeli law restricts missionary activity in the country, and the Catholic Church also discourages it. Centuries of forced conversion by Christians in the past have made Jews and Catholics sensitive to this.

Father Gregory and his monks, for their part, say they regularly experience harassment by fundamentalist Jews who spit at them.

So what does a clergyman preach to a church full of Jews on Christmas Eve?

“I always try to preach quite carefully,” said Father Gregory Collins. “I talk about the Jewish roots of Jesus. I do stress that, as Christians, we believe Jesus is the son of God and the Messiah, and I acknowledge that most of the people in the church don’t believe that. But I think it’s not time for theological discussions. It’s time for celebrating the birth of Christ. And the area where we can all agree is Jesus’ summary of Jewish law: love God and your neighbor as yourself.”

Most of the Jewish Israelis I spoke to in the church said they don’t attend synagogue regularly.

But Father Gregory said when he looks out at the crowd each year, he can tell they are touched.

“They look fascinated and calmed actually,” he said. “When liturgy is done well, it’s a beautiful and dignified thing. I think it’s a point of contact that they understand that something special or sacred is going on.”

It is, indeed, a special atmosphere: the pomp, the glistening mosaic dome, the harmonies of the choir.

But Father Gregory admits there’s one other thing about his Midnight Mass that makes it an Israeli crowd pleaser: they sing "Silent Night" in German.

“Everyone loves 'Silent Night,'” said Collins. “I personally think Silent Night is the most terrible kitsch, and the most sentimental and overplayed melody. But it’s Christmas, and half of Christmas is kitsch to begin with. So I think people come because they enjoy the sentimentality of the traditional Christmas.”

And, hey, there was food, too. After mass, the monks invited the Israelis for coffee and biscuits.