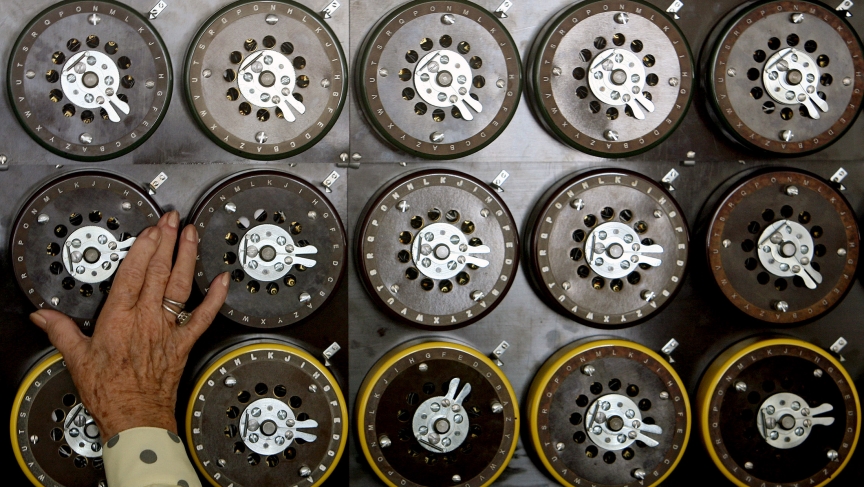 The Bombe was the brainchild of mathematical genius' Alan Turing and Gordon Welchman, and enabled Bletchley Park's Cryptographers to decode over 3000 enemy messages a day breaking the codes created by German military Enigma machine during World War Two.

Without Alan Turing, World War II may have gone a different way.

"Until Turing came along with his wonderful work, our ships were being sunk by the German submarines at [an incredible rate], I hate to say," says Jean Barker, a Conservative member of the House of Lords.

Barker worked with Turing at Britain's Code and Cipher School at Bletchley Park. It was there that Turing was tasked with the impossible: crack the Enigma code. Nazi Germany used the secret messaging system to position its submarines with lethal results. The thought at the time was that if you could crack the code, you could win the war.

And Turing cracked the code.

"It was only thanks to Turing [that] we could read the German U-boat code," she says. "That was when the war really turned because, quite frankly, we could have lost the war through starvation."

Barker, like many, believes Turing's work helped shorten the war, saving thousands of lives. She thinks he's very much a hero of World War II. But his work was classified at the time. So he didn't receive a hero's bounty. And because he was gay in 1950s England, instead he got into trouble. A British court convicted him of homosexual activity in 1952. His punishment? Chemical castration, a process that involved pumping estrogen into his body.

Two years later, he died of cyanide poisoning. A coroner ruled it was a suicide. Mathematician Barry Cooper of Leeds University likes to remind people Turing was only 41 at the time of his death. Already he'd helped develop theoretical computer science.

"Of course in science, it's very difficult to predict what somebody would have done, but it was a huge talent that was lost," Cooper says. "He saw the possibilities of the computer before computers even existed."

He even created a famed test, named after him, to judge artificial intelligence — "the kind of developments that completely changed the world we live in," Cooper adds.

In the decades following his death, stories of his accomplishments began to come to light. In 2009, tens of thousands of people signed a petition calling for his official pardon. The effort led to an official apology from then Prime Minster Gordon Brown. He said Turing's treatment was unfair.

"On behalf of the British government, and all those who live freely thanks to Alan's work, I am very proud to say: we're sorry, you deserved so much better."

For many, though, the apology wasn't enough. The movement for a pardon continued. It culminated with a formal request to the Queen for a posthumous royal pardon. Queen Elizabeth II granted the pardon Tuesday. For John Sharkey the news was a long time coming. Sharkey, a Liberal Democratic member of Parliament, has been a prominent voice lobbying for a pardon.

"It recognizes a great injustice to Alan Turing," he says. "And it recognizes, I think, in part, that he was a very great man and a great British hero."

"It's wrong to give someone a pardon just because they are famous," he says.

In other words, we need to remember that Turing was just one of many people punished for being gay.

"Fifty thousand-plus men who likewise, with Alan Turing, suffered his fate," he says. "But they are not being offered an apology or a pardon."

Tatchel hopes the government will open up the pardon process to more victims. He argues everyone should be equal under the law.

But, at the very least, the long-awaited pardon of Alan Turing is a start.