Kanwar Anit Singh Saini is upset that India has recriminalized sexual relationships between same-sex individuals, and he's speaking out about it. That's made some of his fellow Sikhs uncomfortable or downright hateful.

An uncle told him he would have killed him, if he'd known Saini was gay sooner. Saini posted a picture on Facebook of himself kissing another man, which prompted a heated online discussion and a 12-hour suspension by Facebook. India Today reports on the controversy Saini created among Sikhs and others.

Did the NSA just get its third strike?

On Wednesday, a presidential commission issued its 308-page report on surveillance by the National Security Agency. Its conclusion? The NSA needs to be reformed.

So that means major voices in all three branches of government have criticized the NSA in light of the Edward Snowden leaked documents. A federal judge ruled earlier this week that many NSA practices are likely unconstitutional. And members of Congress are considering legislation to rein in the NSA. The Atlantic reports on the recent critiques of the NSA and asks if they amount to vindication of Snowden's decision to leak the confidential documents.

This Czech snack took a circuitious route to New York

If you can't find kolaches in your American city, just wait a bit. The popular Czech snacks, made with baked sweet dough and a variety of fillings, have taken some parts of the US by storm — after gaining a toehold in a Czech immigrant community in west Texas, of all places. PRI's The World describes one couple's journey to recreate, and reinvent, these sweet treats in Brooklyn.

A drone attack in Yemen raises doubts about US policy

Last Thursday, a US drone launched missiles at what turned out to be a wedding procession in Yemen. The drone strikes in Yemen have been happening for years, with the implicit support of Yemen's government, in an effort to beat back an al-Qaeda insurgency there.

But this strike, which killed a number of civilians and seemed in contravention of US policies, made even the staunchest supporters of the US drone program in Yemen blanch. Foreign Policy suggests it may have been an outright intelligence mistake, and could pose a major setback for US foreign policy.

For many Senegalese, their only health providers are volunteers

There aren't enough healthcare workers in many parts of the developing world to provide services to all the people in need. So many communities rely on trained volunteers to handle everything from immunizations to broken bones.

These volunteers don't get paid and are often the only health workers many people see in a year. PRI's The World examines whether this use of long-term volunteers is fair, and good for the communities.

Buenos Aires has been enveloped in a heat wave in recent days — with serious consequences. The high temperatures and increasing economic development of the Argentinian city have led to unprecedented demand on the electrical system. BN Americas reports outages in parts of the country after the nation set records for electricity usage Saturday, Sunday, Monday and Tuesday. Temperatures have generally been in the low 90s Fahrenheit, and are expected to drop as the week goes on.

Sure, they're 'together' for the holidays 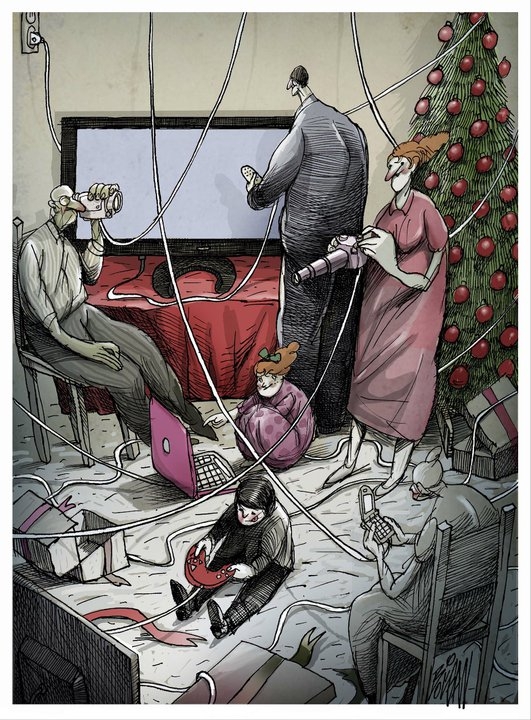 A family celebrates their electronic Christmas "together" in this cartoon by Cuban-born Angel Boligan.