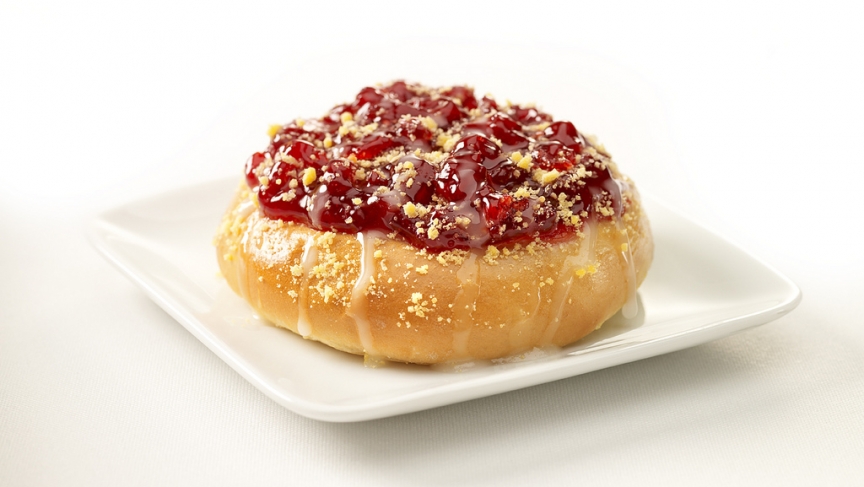 It's hard to create a bad snack when you start with a ball of baked dough. Fill that with a pool of fruit, poppy seeds, whatever... and you have a kolache.

It's a Central European snack especially popular with Czechs. And, as it happens, with Czech immigrants to the great state of Texas. That's where Paul Ashey grew up. Now he and his wife Sarah have brought their love of kolaches to New York, where they've launched a business called Kings Kolache*.

Paul and Sarah Morgan Ashey married earlier this year and live in Brooklyn. It was during trips to visit with Paul's Texan family that the two built up a serious love for the kolache. While other members of the family would go on long, healthy runs, Paul and Sarah snuck off to local kolache shops, “licking our chops”, as Sarah puts it.

So they launched their own business based in Brooklyn — and it joins a growing band of kolache purveyors in American cities beyond Texas, including Brooklyn Kolache Co and Portland’s Happy Sparrow Café. (Of course, Portland.)

The Ashey’s kolache line-up includes an homage to a bar snack from their alma mater, Sewanee. The Granger is a ball of sweet dough stuffed with cream cheese, bacon, cheddar cheese, and a special sauce.

That kind of experiment is key to the kolache’s appeal, says Paul Ashey. “You can put anything inside of [it] and make it your own. It’s kind of the perfect, adaptable comfort food.”

Some purists, including in the Czech Republic, argue that a kolache with fillings of meat or cheese can no longer be described as such. That would be, they say, a klobasnik. Which may be formally true, but the American melting pot blends all kinds of distinctions, linguistic and culinary ones included.

Still, the Asheys have paid attention to the snack’s roots. Sarah Morgan Ashey is fond of a legend associated with the kolache that tells of an “annoying” daughter who was given a lump of bread dough by her mother, to keep her quiet. “So the daughter sat at the kitchen table and started throwing a bunch of plums in the dough, rolled it up and snuck it into the oven with her mother’s bread.”

When her father came home, or so the story goes, he decided to try his daughter’s dough. But it scalded him so much he danced “around the table in a wheel pattern, in a circle.”

“So the word kolache comes from the [Czech] word kola, which means wheel. That’s the legend.”

Hungry? Want to try to make kolaches yourself? Here's a bit of history and a recipe.

*Update: The name of the business was originally posted as "Kolache Ko." The name has since been changed to Kings Kolache.