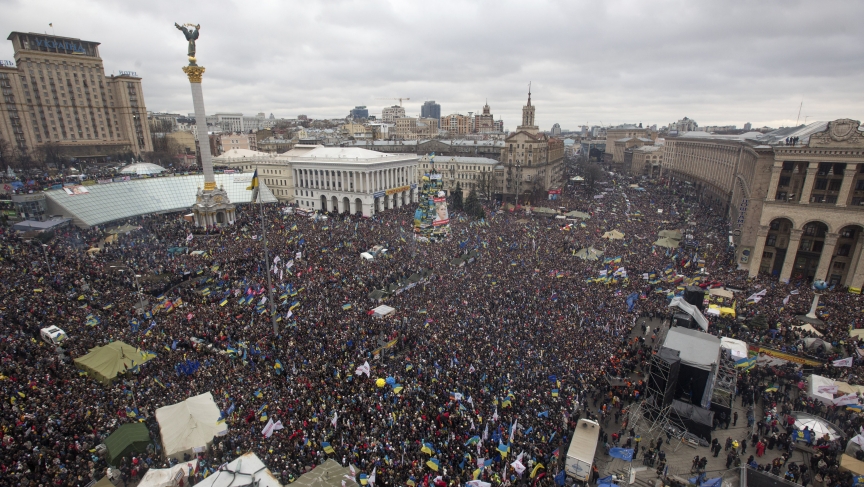 Pro-Europe protesters flocked to Kiev's Independence Square on Sunday, December 8, 2013, for a rally that organizers were hoping would swell to 1 million people, putting pressure on Ukrainian President Viktor Yanukovych to turn back from seeking closer ties to Russia.

Hundreds of thousands of Ukrainians protested on the streets of Kiev over the weekend. Kiev's Espreso TV morning host Anastasia Melnyk was there, too.

Only she wasn't there to cover the protest. She was there to protest.

That's been her routine for the last few weeks. She reports the news, and then she joins it.

It's something public radio producers cannot do. In fact, there have been people fired over it. Not so at Espreso TV, a fairly new Internet news outlet in Kiev. It's okay for Melnyk to do both. So she is. Everyday.

She's part of a group that wants to see the country move closer to the European Union. This pro-EU group is upset that President Viktor Yanukovych, in their view, turned his back on the EU and is seeking closer ties with Russia.

For Melnyk, it's also a family event. Her father has been at the protests daily. Her mother lives in Belgium and protests there, too.

She says the family is just part of a larger movement trying to make up for the failed Orange Revolution nine years ago. They want change in Ukraine. They want the country to open itself to the West, instead of continuing its historic ties to Russia.

Will it happen? Melnyk isn't sure. But she's seeing what she calls, "a changing consciousness in people."

It's one that led protesters to topple one of the last statues of Vladimir Lenin in the city. It's one she'll continue to fight for.

And it's one she'll continue to cover.