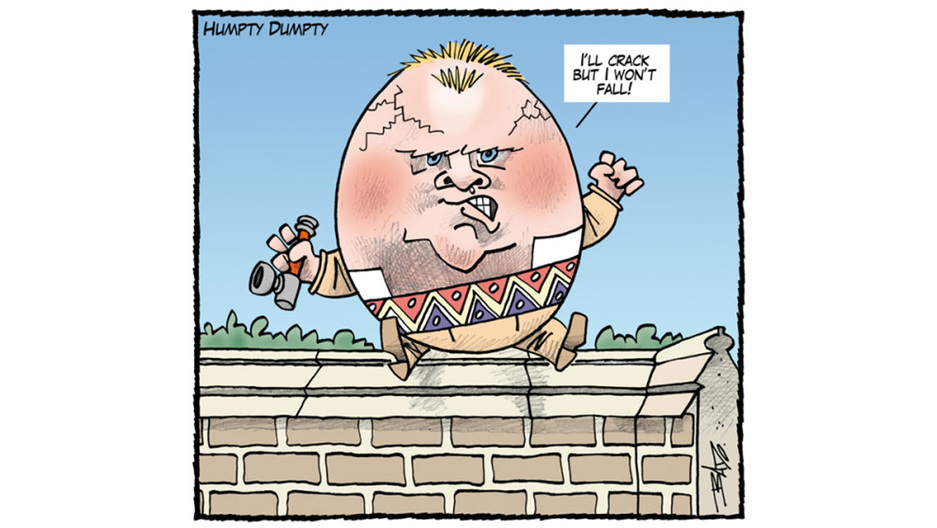 Canadian cartoonist Guy Badeaux (also known as Bado) shows the frustrating durability of Toronto Mayor Rob Ford. The Toronto City Council Friday stripped him of some powers, but there's no sign Ford will be leaving office before elections next October.

Here’s a rule of thumb for world leaders: If a Swedish furniture store is more generous than you in times of global disaster, you might come off as, well, tight.

USA Today has a story of how China's international aid to the Philippines — $1.6 million, compared to $2.7 million from Ikea — is being perceived abroad, and at home. China is being criticized as being tight-fisted and making a foreign relations blunder. But experts say there's a reason for it. The government is often loathe to increase its donations because of concern over how it would be perceived at home, where the country still has a great many people living in poverty.

Hippo teeth. Walrus horns. Stuffed alligators and dessicated alligator heads. Who has such a wild and varied collection of, er, stuff? The Independent has assembled a gallery of some of the stranger objects confiscated by Britain’s border police.

The other victims of Haiyan

Typhoon Haiyan made a direct hit on the Philippines, but on its way, it also delivered a glancing blow to another Pacific island nation: Palau. There, some property was damaged and no one died. Experts don't blame the typhoon on climate change, but in Palau, the experience has many on the islands considering what a changing climate might bring to their small piece of tropical paradise. PRI's The World has a report from Palau.

The US made waves earlier this month when it started allowing gate-to-gate use of personal electronic devices, and the Europeans were quick to signal they, too, would allow electronics at all phases of flight. But American officials have drawn a line at in-flight use of phone functionality, such as texting or making calls.

The Europeans, however, seem ready to go a step farther and allow the use of 3G and 4G services above roughly 10,000 feet. According to The Guardian, though, individual airlines would still have the ability to determine whether in-flight calling was OK. "I'm sorry you are breaking up... no, not literally."

Goodbye and thanks for the fish (that are left)

These days it takes a quite a lot of environmental doom and gloom for a story to shock us. But here is a shocking statistic: The BBC reports that about 30 percent of ocean life will be extinct by the end of this century, as we slowly turn the seas into vinegar. The acidification comes from the absorption of carbon dioxide into  ocean water — and, of course, the increase in CO2 is produced largely by human endeavors.

Friday nights in Nigeria usually mean church. And in a country that's home to nearly 170 million people, those churches have to be pretty big. PRI's The World has the story of one church in Lagos, the Redeemed Christian Church of God, that has its services in an "auditorium" that's the size of 87 football fields.

And the congregation is already out-growing it.

Retweet and send this important message to the world pic.twitter.com/C1wcYK1d2o

A system of thunderstorms is slowly gaining form in the Bay of Bengal off the coast of India. It could develop into an organized and named tropical cyclone, or it could remain an unorganized storm, according to AccuWeather. Either way, the country is lined up to get a whole lot of rain, up to 10 inches in places, possibly leading to widespread flooding.