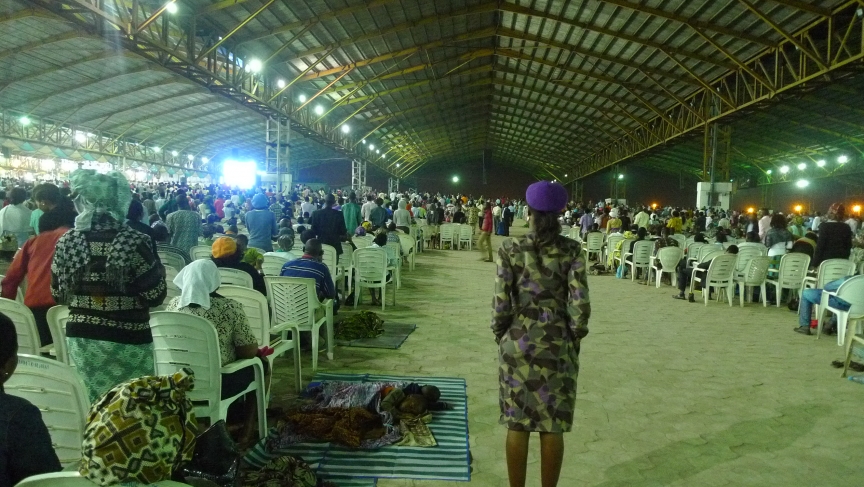 Under an open-air pavilion built to seat a million people, children sleep on mats spread out on the cobblestones while their parents enter their 6th consecutive hour of worship.

If you're going out on a Friday night in Lagos, Nigeria, chances are you're headed to church.

All-night prayer vigils are at the core of the country's booming Pentecostal movement. Some churches draw worshippers in the hundreds of thousands.

At one church, the Redeemed Christian Church of God, Friday night vigils take place in what locals call an "auditorium." It's a covered pavilion the size of 87 football fields, and it’s not quite big enough. The church has already cleared ground for a bigger one.

In fact, it's something of a pattern: the church's old pavilion was demolished a few years back, and now vendors have set up shop on the old foundation.

“Once the service starts, all these people selling, they'll close their shops and go inside the auditorium to listen to the word of God,” says Wale Akande, a volunteer who stands by the auditorium, welcoming visitors to the Holy Ghost Service in a fluorescent green vest.

The pavilion here was built in 2000 to seat a million people. It's basically a corrugated rooftop. The ground below is paved with cobblestones and lined with thousands of crude wooden benches and plastic chairs. Akande says attendance is down tonight because of rain; the pavilion is only a third full.

Then Akande asks me a question I hear over and over again all night: “Have you heard about the auditorium that's going to be built next? It's going to be 18 times this size.” That's three and a half square miles, all under one roof.

Inside the current auditorium, worshippers prepare for the vigil under stadium lights. Some pray aloud on mats stretched out on the ground. The praise doesn't let up for the next eight hours. Most people can only see the altar on giant screens, if at all, but it hardly seems to matter.

“It's really, really, really mighty,” says Semi Oladepo, a university student. She tells me that Holy Ghost Night is when you talk one-on-one with god, and expect a miracle from him. Other than a few children sleeping on the ground, the crowd seems intensely focused on just that.

But the Redeemed Church is also focused on gaining new converts. That's part of the logic behind headline-grabbing projects like a prayer hall almost three times the size of Central Park, and the church's sprawling, city-like campus, Redeemed Camp. Oladepo lives here, and she says she seldom leaves. “We have secondary schools, we have hospitals, police stations, we have gardens,” she says.

Even more important, though, is old-fashioned Christian outreach. Oladepo urges me to accept Christ before it's too late, then checks on my progress a few minutes later. “Do you think you'll become a Christian soon?”

Whether I do or don't, Redeemed's outreach appears to be working. American gospel singers came to perform at Holy Ghost Night this year — taking the usual route of American evangelicals coming to Africa. But increasingly, Christian evangelism is headed in the opposite direction. In June, Redeemed inaugurated another pavilion with 10,000 seats — in Greenville, Texas.

Rowan Moore Gerety reported with the help of a grant from the International Reporting Project.