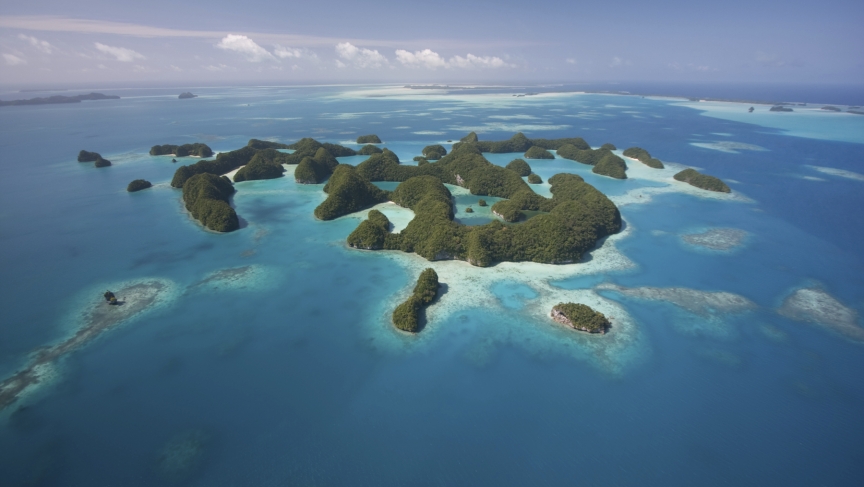 Palau's more than 200 volcanic and coral islands are little more than green dots in the Pacific Ocean east of the Philippines. The country's northernmost region felt the early wrath of Typhoon Haiyan, but no deaths were reported.

The world's attention has been focused this past week on the ongoing disaster in the Philippines, as millions of residents there struggle to cope with the unprecedented crisis brought on by Typhoon Haiyan.

But other countries in the region also suffered at least glancing blows from the storm, including the small Pacific island nation of Palau, just a few hundred miles east of the Philippines.

The World's Ari Daniel, who happened to be in Palau this week reporting on coral reefs, says the area hardest hit by Haiyan was the northernmost island of Kayangel.

Daniel says the storm's eye passed within about five miles of Kayangel, destroying houses, blowing off roofs, and damaging trees and infrastructure. But he says some residents evacuated before the storm and just about everyone cleared out after it blew through. No deaths were reported.

One saving grace, Daniel reports, was that the typhoon hit during low tide, which prevented a bigger storm surge. Still he says, a relief effort is underway to provide housing and assistance to displaced residents and restore damaged infrastructure.

Haiyan was the second typhoon to blow through what's normally a relatively quiet corner of the Pacific in the last 11 months, which Daniel says has left many Palauans concerned about the growing impact of climate change there.

"People are observing this increased frequency [of storms] over the very short term," he says, "and they're wondering what's to blame. And so some people are looking to blame climate change."

Scientists have generally said climate change played little, if any, role in the formation of the storm, although it has contributed to rising sea levels in the region, which can worsen flooding from any storm.

In any case, Daniel says climate change is definitely a worry going forward.

"If sea level does rise [more]," he says, "Palau is going to be hit pretty hard.

"In addition, the people of Palau really depend on the ocean, their identity is woven in and around the ocean. That relationship is something that's historic and quite important, so when they think about climate change and sea level rise, it's definitely concerning them."

Daniel says some locals are less concerned than others. He says one researcher told him that even with several feet of sea level rise, most of the islands would be fine, because there's a lot of higher ground.

"But it's people who have land and grow crops near the shore that are concerned," he says.

One woman told him, "there's a tradition here that people don't leave their island in case of an emergency, because, if they leave their island, there's the thought that they may come back to an island that's disappeared. They may not be able to return."

Daniel says this resident was among the few locals who didn't evacuate during Haiyan.

"They were going to stay no matter what," he says. "She said, even if the seas rise, she will set up shop in a boat, because she's Palauan and she plans to stay here."

Others, though, will leave the country, if conditions get worse, he says.

Ari's reporting in Palau is made possible by a grant from the Solutions Journalism Network.